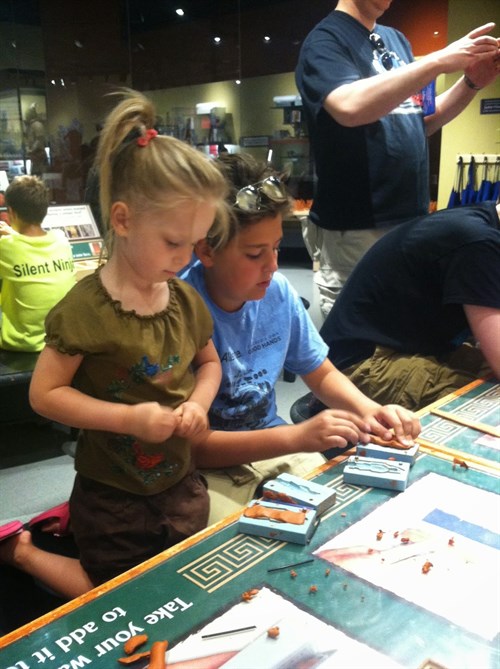 Two weekends ago, our family set off to discover Indianapolis. We had two Indy missions in mind: to hang out a bit with some orangutans and to stare down some warriors made of terra cotta. Along the way, we discovered that Indy – located less than three hours from Chicago – makes for a quick, easy, educational and fun family getaway.

We spent almost an entire day at the world’s largest children’s museum – the Indianapolis Children’s Museum – to see the Terra Cotta Warriors. This army of thousands of warriors, sculplted from terra cotta, was buried for centuries, protecting an emperor’s tomb. This beautifully presented exhibit (on display until November 2, 2014) tells the astounding story of the tomb complex of China’s first emperor, and features real Terra Cotta Warriors — considered by many to be the Eighth Wonder of the World. We examined more than 100 ancient artifacts and enjoyed hands-on interactives which gave us the chance to pretend that we, too, were part of the archeological research team. My kids, ages four and 13, sculpted mini terra cotta warriors of their own, pieced together broken warriors and looked the warriors themselves in the eyes. This is the first time the Shaanxi provincial government is allowing this particular exhibit with eight of the Terra Cotta Warriors out of the country and this fantastic exhibit is not to be missed.

My kids make terra cotta warriors of their own at the Indianapolis Children’s Museum.

Be sure to explore the other exhibits at the museum, including the thought provoking Power of Children exhibit, which highlights the powerful stories of three extraordinary 20th-century children — Anne Frank, Ruby Bridges and Ryan White — and the Dinosphere, which will transport you back over 65 million years ago to the land of dinosaurs.

We chose to explore by bicycle, renting bikes from Wheel Fun Rentals: the 13-year-old boys opted to cruise around on choppers, while my four-year-old daughter and I hopped on a surrey. From Wheel Fun Rentals, we zipped around the park then parked our wheels outside the Indianapolis Zoo. 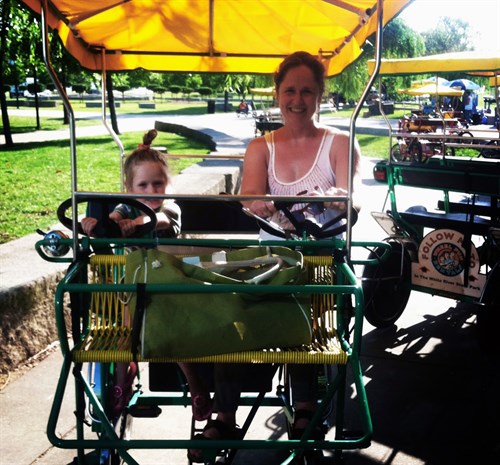 Organized around the concept of biomes – areas of the planet with similar climate, plants and animals, the Indianapolis Zoo is the only institution accredited by the Association of Zoos and Aquariums (AZA) and the American Alliance of Museums as a zoo, an aquarium and as a botanical garden. The recently inaugurated Simon Skjodt International Orangutan Center is the new home to one of the largest groups of orangutans in any American zoo. We were able to literally stare into the eyes of these amazing animals, and we took the time to learn more about their plight as an endangered species thanks to the interactive exhibits and zoo staff on hand to answer questions.

Our number one dining pick in Indy is Punch Burger (137 East Ohio St.), where you can build your own gourmet burger. Punch Burger makes a point of using only local grass-fed Angus beef raised in Indiana. Give some of the more adventurous combos a try! Bazbeaux Pizza (333 Massachusetts Ave.), located in the heart of the Mass Ave cultural district, is another family-friendly Indy staple for some of the best pies in town.