Making sacrifices for kids: Where do Chicago parents draw the line? 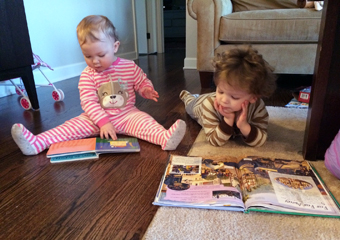 My husband and I were at a fifth birthday party last week chatting with another parent as one does at these things. We didn’t really know the other parent, so made polite conversation. He also has three young kids about the same ages as ours. We laughed about how nuts it can be. Somehow we touched on a shared appreciation for a Sunday morning show that we all enjoyed. He said something along the lines of feeling officially old now that he watches it. We laughed and commented that we used to watch it every week, but since having kids we don’t really watch TV unless it’s a kids show or at night when they’re sleeping.

His response was something to effect of “Yeah, well you can’t give up everything. Sometimes the kids need to realize you’re doing something else.” At the time we nodded in agreement, but I wanted to say “Really? You can watch TV on a Sunday morning? That works?”

It really made me think . . . Do I have the only kids in the world who don’t give us an inch of breathing room on Sunday mornings? They wake up with a laundry list of things they want to play or do. And if they don’t have a list, they ask us to give them ideas while physically sitting on our laps or asking to be picked up or running their hands through my hair. Are my kids just really needy? Should they be able to entertain themselves? Is this guy actually watching TV on a Sunday over a nice hot cup of coffee? Because the last time I had a hot cup of coffee on a Sunday morning was in 2008. What is his secret?

And the biggest question of all . . . Are we suckers for not watching something that we enjoy and telling our kids to stay in the playroom (how does that even work anyway?) or is giving it up just part of being a parent?

I do believe that there are things we need to hang onto as a parent. If you have a passion, it’s important for your kids to see you devote time and energy to something. Just like it’s important for your kids to see you take time for yourself to exercise. It’s all about teaching kids about good habits, showing them how to work hard for something and letting them know that parents have more going on than just changing diapers, making food and going to work. Is this the same thing?

I know our time to start watching the show will come again, so I’m okay with skipping it for now. Before I know it we’ll be sitting with our hot cups of coffee while our kids are still in bed, remembering these days when they actually wake up in the morning excited to hang out with us.

Until then I’ll be drinking cold coffee on the hard floor of the playroom.

What do you think? What things are you not willing to give up as a parent?

Pick your way through these awesome spots worth the drive from Chicagoland.
Read more
Guides