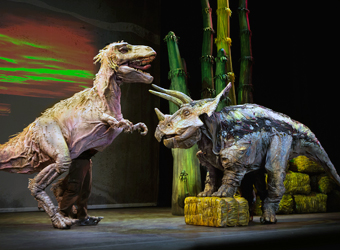 My family checked out Erth’s Dinosaur Zoo Live at the Broadway Playhouse at Water Tower Placeon opening night with our 3-year-old son, who often starts his day by saying “65 million years ago, T-Rex was the most ferocious predator on the planet.” Then comes a request for breakfast, usually with the reminder that he is a “carnivore.”

Tickets range to (with some VIP tickets available
for select shows) at 800-775-2000 and
BroadwayInChicago.com.

My point is that dinosaurs are a big deal around here. The interactive show combines science (the facts) with puppetry (the dinosaurs) and silliness (the Triceratops farts; kids erupt with laughter.) It was a fun family night and watching the little kids get so excited was really adorable. I recommend it to anyone who has a similarly crazed dino lover, but there are a few things to know before you go:

The show is interactive, which means some kids get pulled up on stage. And obviously, others don’t. This may or may not be a problem, depending on the age of your kid. Mine raised his hand every time, and when he wasn’t picked said, “Oh, they meant me” and tried to go up. Older kids weathered this better, some little guys cried. Just be ready one way or the other.

It’s only an hour long, which was great for my toddler’s attention span, but left 8-year-olds wanting more.

There was more interaction with the dinosaurs than there was variety of species. The T-Rex covered in feathers brought the house down, and the Triceratops, prehistoric dragonfly and baby dinosaurs, but these kids know such a breadth of species that the handful represented didn’t seem like enough. My son, however, had an explanation. “The stegosaurus was probably sick.” Probably.

The more affordable tickets will do just fine. There’s no need to pony up for the big ticket seats; the theater is small enough that there’s no bad seat in the house.

All in all, it was an hour of dinosaur fun and my son loved it.