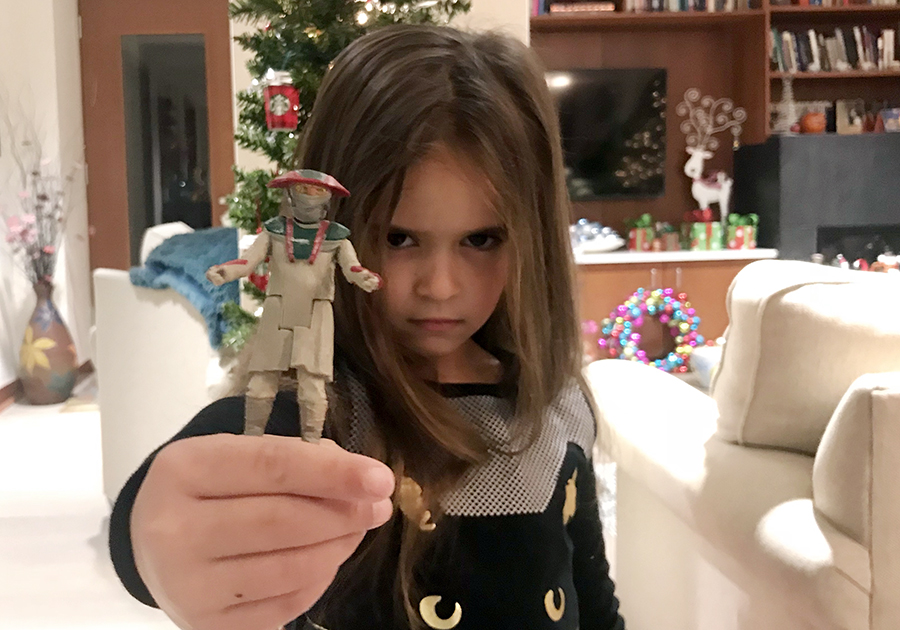 This week’s blog post is by The Paternity Test co-host Matt Boresi, who lives in the Edgewater Glen neighborhood of Chicago with his wife (“Professor Foster”) and their 6-year-old daughter Viva, whose only Christmas desire is her lower central incisors.

Every December parents are inundated with articles about the “hottest Christmas toys,” with the media salivating over the possibility of another Cabbage Patch Kid or Furby or Tickle Me Elmo. After all, who doesn’t want to read about moms knocking each other out to grab a Teddy Ruxpin (the legendary tape deck dressed as a bear). I’m sure the initial toy stampedes of the ‘80s were organic affairs … some toy got unexpectedly hot, media attention compounded the appeal and chaos ensued. Now these runs on the toy aisle are manufactured affairs, with short-packed toys getting positioned and P.R.’d into a mania. It is planned scarcity in the name of press. (I never did get an NES classic.) It’s enough to make Santa cry right onto Baby Jesus.

The hot toy this year seems to be something called “Fingerlings.” Expecting delicate potatoes roasted with herbs and garlic nestled alongside juicy slices of steak au poivre, I set out to buy some Fingerlings and report on them for Chicago Parent. I quickly learned three things:

Fingerlings are robot monkeys, not potatoes.

Fingerlings, despite being neither delicious nor appealing, are nearly impossible to find.

Fingerlings are like the “Little Live Pets” of previous years. They are cooing, battery powered animals you can pet and kiss and in return they will cling to your finger, turn their heads, make weird little monkey noises and burn through LR44 batteries that cost half as much as the monkey. They’re supposed to retail at about fifteen bucks, but with them all sold out you have to buy them through third-party vendors for up to sixty bucks. Often, these shadily acquired Fingerlings are knock-offs. That’s right, the market is flooded with fugesi monkeys that probably just burst into flame when your kid blows it a kiss on Christmas morning.

Unable to find any Fingerlings — the Toys ‘R’ Us lady actually laughed at me when I asked if they had some in stock (And I wonder why they’re going out of business.) — I searched around for other toys that might be appearing on your kids’ list. What I found were some other real stinkers that would be best left at the North Pole. Below are four more toys I found unappealing, and which I desperately hope my daughter, Viva, is not expecting from Old St. Nick. (‘Cuz he ain’t bringing them.)

The Recoil Laser Combat Starter Set looks as fun as all hell. It also looks like a great way to get yourself shot. It’s a laser tag game, and I’ve loved laser tag since my parents bought me a set in the ‘80s. Of course, back then, we ran around with toy guns and played imaginary slaughter all day. There was also smoking allowed in the dentist’s office and toddlers stood up in the back of the car. What I’m saying is, the ‘80s were a barbaric time, and no one batted an eye at kids running around shooting at each other. The Recoil has pistols with realistic kickback and you can mount your iPhones on the guns to hunt the other players using GPS, and there’s 3D sound so you can really hear death come knocking. Recoil even makes a LASER HAND GRENADE. That’s like, my ‘80’s childhood dream. However, it isn’t the ‘80s anymore — all the demogorgons have been vanquished and you can barely even Juul in the dentist’s office, let alone smoke — and if you run down the street firing a pistol, you will be killed.

Orbeez is also all about that little maneuver. Orbeez is a system of little squooshy spheres that plump up in water and stick together. You can make little sculptures with them, or crush them and make them into … edible treats? (So I guess they aren’t poisonous.) In their most egregious cash-grab, the good people at Orbeez have created a foot spa, where you dumb copious amounts of Orbeez into a bucket and put your feet in them. It’s like if I created a new game that involved dumping piles of Thundercats into a furnace. Great for Thundercat sales, tough on Mom and Dad’s pocketbook.

The Star Wars movies revolutionized merchandising in the 1970’s by putting their label on every possible item and by making every character, vehicle, location and prop in the films into a toy to be purchased. I’ve always been fascinated by the number of Star Wars toys based on characters that barely appear in the movies or don’t do anything even remotely involving “action.” I recall as a boy owning a character named “4-LOM” whose claim to fame was that the camera panned past him in “The Empire Strikes Back.” I believe he was a bounty hunter. Most characters without lines in Star Wars movies are either bounty hunters or bureaucrats. 4-LOM was so unimportant that it turns out the character in the 4-LOM package wasn’t even 4-LOM, it was a character called Zuckuss who was also a bounty hunter with no lines who also stood still as the camera went past him, along with a lizard guy, a guy with a coffee pot for a head, a guy covered in ACE bandage and Boba Fett.The new Star Wars sequels have built upon this tradition. Two years ago they shipped MOUNTAINS of packages of a character named “Constable Zuvio.” (Viva is holding Constable Zuvio … reluctantly … in the photo above.) It takes a pretty brief appearance to top the worthlessness of 4-LOM and Zuckuss, but Constable Zuvio does indeed top them, by NOT APPEARING IN STAR WARS AT ALL. Evidently his scene in “The Force Awakens” was not only cut, but left off the DVD deleted scenes. He is an action figure of a character no one has ever seen. Between this guy and socks as a Christmas present … well, at least you can wear socks.

“The Last Jedi” continues in a similar vein by having a deluxe high end two-pack of characters no child could possibly want to play with: Admiral Ackbar and “First Order Officer.” Admiral Ackbar is an elderly octopus dude who evidently came out of retirement as leader of the Rebel fleet to stand at consoles behind General Leia and push buttons that aren’t attached to anything with his weird Robert Altman “Popeye” movie arms. “First Order Officer” is bad guy middle management. The movie isn’t out yet but presumably his main task is to walk down corridors while more important characters walk in the other direction to make the spaceships seem busy. If he’s lucky he gets choked out by Adam Driver. And now he has a toy forever.

This is an action figure of feces.

I’ve found the toys to avoid so you don’t have to. Good luck with your Christmas shopping. Oh, and I hear they are bringing back Teddy Ruxpin this year … don’t get punched!