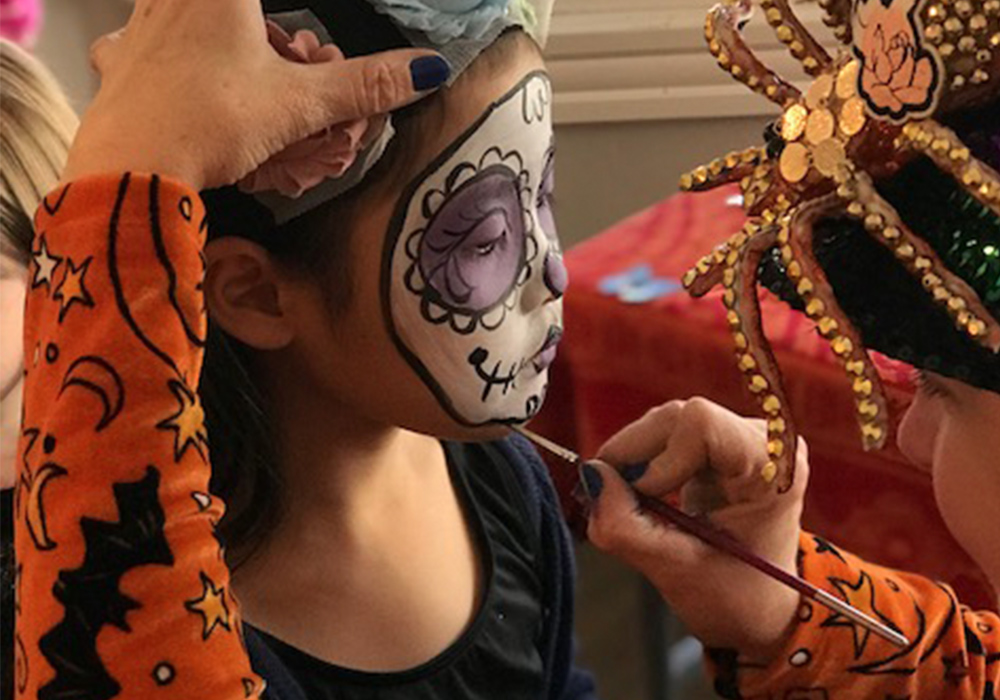 With three little ones of my own, I know how time consuming it is to throw the perfect birthday party for 15-20 of your kids’ closest friends. First, you must come up with a theme, which has to be creative enough to spark enthusiasm, and one that your mini critic can agree on. Then, like an art form, you must balance the guest list with soccer friends, school friends and summer camp friends. Next you create a meal plan that enhances your theme, decor to complement, and lastly, try not to forget the most important detail, the cake.

But for real, what on earth will almost two dozen kids do for two to three hours?

If you have a little bit of time to spare, the following mamas executed some of the coolest, trendiest birthday parties around and they share some ideas on how to pull off the party. These can be done at home or at one of the many venues around Chicagoland that cater to birthday boys and birthday girls.

Day of the Dead party

As a designer, I live for party planning and styling. Last October I threw a Day of The Dead October birthday for an 8-year-old. There is something cozy about a well-thought-out party at home, a true memory maker for children during formative years. We had a face painter, teen helpers, nail bar, flower crown making, teen DJ and tattoos. Just add a taco truck and this theme is fun and easy.

– Annie Dwyer, interior designer at @salvagegirlchicago, and mom of three

We did an amazing scientist party for Jack when he turned 5. Two scientists came to the party, the kids made bouncy balls and played with black lights. The caterers had dry ice all over everything! The gift bags had magnifying glasses, goo and all kinds of science-related things. The easiest part was it happened right in our home, and it was a great time for the kids and adults alike. The birthday boy still talks about the scientists that came to play in our playroom!

Welcome to the jungle

For my son’s 3-year-old (December) birthday we had an animal-themed party (giant snake sub sandwich, veggie “tree” cups) and we had a trolley pick everyone up and take us to Lincoln Park Zoo for Zoo Lights. I made survival packs for everyone, which included hand warmers, juice boxes for the kids and “jungle juice” (mini bottles of rum) for the adults.

Food competition meets birthday party! Each kid will have the opportunity to decorate a birthday cake for the birthday kid. The birthday kid picks which cake wins, but really, it’s a win-win when everyone gets to sample all of the cakes.

Eat: one-handed party foods such as pizza, chips & salsa, snack mix. After all, the kids will be busy decorating the winning cake!

Wear: favorite party attire that you might not worry about if it gets a bit colorful.

Decorate: Very vibrant and colorful. Go for a high-energy feel with plenty of balloons, streamers and confetti. Set up an area for each kid to have a work station to decorate a pre-cooked undecorated cake. Judging will take place by the birthday kid and the winning cake will be part of the celebratory birthday singing and candle blowing. Make a wish!

I love to entertain. So, when it came time to plan a party for my son Luke I knew it would be at the house. Every year is a new theme. Since Luke loves to use his imagination and explore, I thought the perfect theme for turning 6 would be a Scavenger Hunt-themed party.

We catered from a local, family-owned restaurant, La Parrillita in River Forest. They were delicious! The Scavenger Hunt themed cake was made by Reuter’s Bakery, and Luke’s favorite detail was the river and magnifying glass.

The kids received goody bags filled with items that played into the scavenger hunt theme. I purchased all the items from Amazon. I had so much fun putting the bags together. Allowing Luke and his friends to be creative at the party was important to me. It’s all about letting them explore and letting their imagination soar.

– Sanem D’Angelo, owner of @ShopSanems and mom of two

This article originally appeared in the October 2018 issue of Chicago Parent. Read the rest of the issue.

Try one — or all — of these easy breakfast ideas for kids when the school year begins.
Read more
Attractions