10 Biggest Best Things for Kids to Do in Chicago 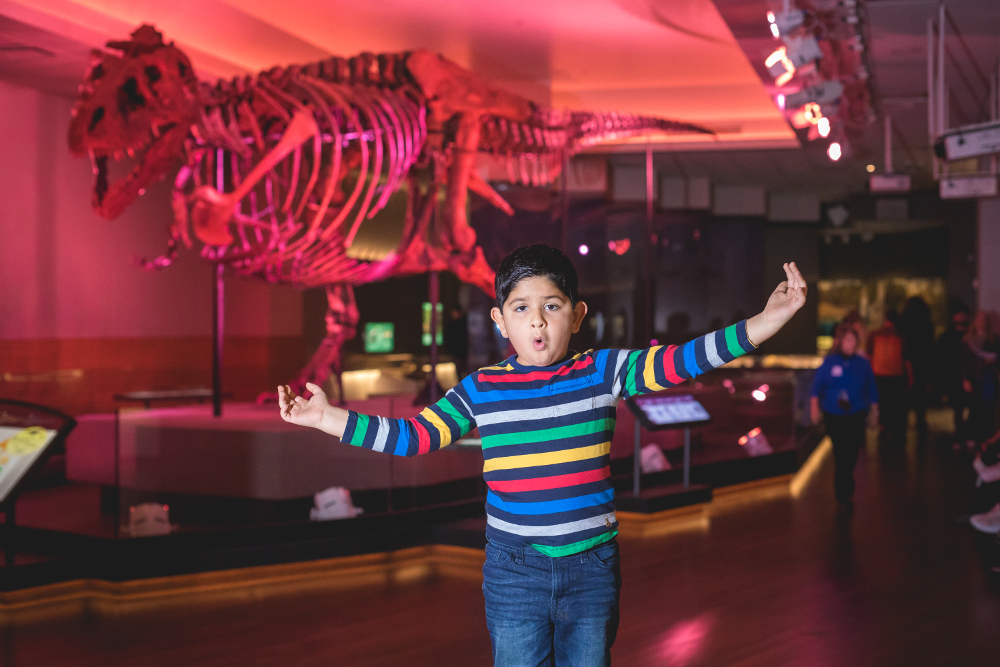 Our city is best known for its tall skyscrapers, delicious staple foods and world-class attractions. While most of us have partaken in these ‘best of Chicago’ experiences in one way or another, we’ve compiled a list that takes it to the next level.

You’ve probably visited the Shedd Aquarium, but have you ever gone swimming with a Beluga? You’ve likely feasted on deep dish pizza, but have you cooked it alongside the pros? And how about Chicago’s most iconic landmarks—have you seen them from 1,200 feet above?

While some of these experiences are on the pricey side, we think the memories are well worth their weight in gold.

Snap a selfie with big dinos

Visit Máximo (meaning “maximum” or “most” in Spanish), the Titanosaur that replaced Chicago’s beloved Sue in Field Museum’s Stanley Field Hall. This plant-eating dinosaur, which weighed 70 tons more than 100 million years ago in what is now Patagonia, Argentina, reaches 122 feet across the room and stands 28 feet tall at the head. Guests can walk underneath him and touch him.

Let your kiddos take adventure to new heights by exploring more than 50 interactive climbing walls under one roof, some that reach up to 20 feet in height. Funtopia, with locations in Glenview and Naperville, is an active child’s paradise. All of the walls and structures are themed in fun motifs that correlate to children’s stories or imaginations, with various skill levels needed for each wall. Kids can climb a beanstalk, scale across a city or climb into a spider web.

Slip into a flight suit, soar like an eagle and experience the sensation of skydiving without jumping out of a plane at iFLY, the world’s largest indoor skydiving operation with locations in Lincoln Park, Naperville and Rosemont. Little ones ages 3 and up will learn about flying in a wind tunnel and then suit up with a helmet, goggles and flight suit. Each participant receives two one-minute flight rotations (the equivalent flight time of three tandem skydives) and leaves with a personalized flight certificate. Participants have described this safe experience as a “smooth cushion of air” and a “sense of freedom.”

Learn how to make deep dish pizza from the restaurant that invented it in 1943 with a cooking class at Pizzeria UNO. Hands-on classes are taught by UNO chefs with decades of deep dish knowledge. Pizza lovers will shape the famous dough into an UNO deep dish pan, crush tomatoes to make their own sauce, layer cheese and add toppings of choice before feasting on their creation.

While the pizzas are in the oven, UNO chefs will school guests on the history of deep dish. Want to re-create it at home? All participants leave with the secret recipe.

Put on a wetsuit and get up and close and personal with the Belugas by feeding them, petting them and practicing tricks with their trainer in the underwater ledge at the Shedd Aquarium’s Grainger Beluga Encounter Habitat. This personal encounter, for kids 12 and up, allows participants to learn about these “gentle giant” mammals, try some training techniques, and see how the animals are cared for.

Ride the Zamboni at a Blackhawks game

Seriously, is there anything cooler (literally) than riding a Zamboni at a Blackhawks game? For a $500 donation to Chicago Blackhawks Foundation, young Blackhawks fans can ride the Zamboni during the pre-game (giving riders the opportunity to watch the visiting team warm up) or in the first and second intermissions. The 6,500-pound ice resurfacing machine washes and shaves the ice to create perfect hockey-playing conditions.

See the city from up above

Experience the sights of the city from 1,200 feet above it! Chicago Helicopter Experience, a helicopter touring company with a heliport in Bridgeport, takes families on an epic and unforgettable journey through some of the city’s most popular sights. From the Willis Tower and 875 North Michigan Ave. (formerly the John Hancock Center) to Soldier Field and Navy Pier, the live, narrated tour covers 24 miles of the skyline in just 15 minutes.

Before the tour departs, kiddos can enjoy games like bags and giant Jenga, or build up their excitement by watching others take off through viewing windows.

If your kiddos have cabin fever, consider a change of scenery by taking a staycation at the Four Seasons Hotel. During their stay, kids receive special perks like a prize from the treasure chest, a visit from the Ice Cream Man, popcorn and sodas delivered to their room, access to the 32nd floor Kids Clubroom (complete with foosball, air hockey and Nintendo Wii) and VIP passes to Chicago museums.

Tour (and taste) the best doughnut shops in Chicago

What could be a sweeter experience than the famed Underground Donut Tour? Discover some of the best doughnuts the city has to offer in one of the highest rated food tours in Chicago. Guests will get to sample signature doughnuts from the French Market, Do-Rite Donuts, Firecakes and Stans.

We don’t want to give away all the secrets, but guests can expect to feast on doughnuts straight from the fryer in flavors that may include Rock Star (pop rocks and strawberry sauce), Goomba (crushed canoli) and Tahitian Vanilla Glazed.

Sip tea at the Drake Hotel

For families with little ones that love hosting playroom tea parties, up the tea game with a trip to the Palm Court at The Drake Hotel, Chicago’s most famous tea room where even the Queen and Princess Diana have visited. The Drake offers a separate tea menu for little princes and princesses (ages 4-12) that features hot chocolate, finger sandwiches and scones.