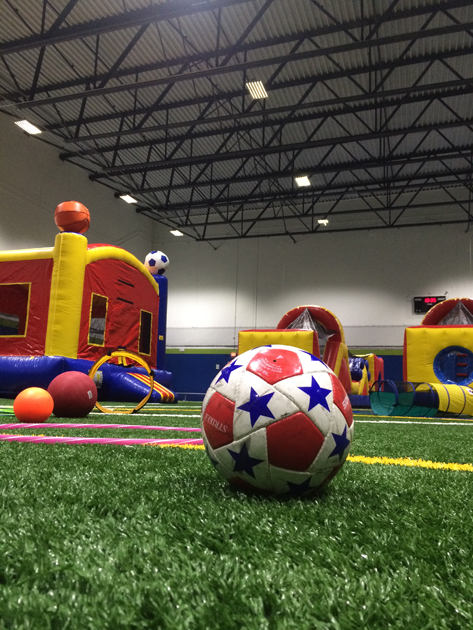 Spring Break to kids means a week of “freedom” from school, a time to rest, re-charge and get ready for that last push to summer.

To parents it can mean complete panic! How do you fill seven days of activities without going completely broke? Add to that the mostly crummy weather we have been having and the options whittle down pretty quickly.

If you haven’t heard of Accelerated Center in Glenview you are not alone. It just officially opened a few weeks ago.

A quick description of Accelerated Center is several massive indoor fields laid out for every sport from soccer to baseball, all indoors and all brand new.

Accelerated is much more than that, though. It’s a state-of-the-art facility where you would expect to see the Chicago Bears playing. Instead of giant-sized men, though, there are kids of all ages, running, throwing, climbing, playing, laughing all at the same time, all safe and all having a blast.

It’s massive and that’s one of the things that make Accelerated Center stand out: the ability for kids to run and play without getting trampled by other kids. It can section things off in a dozen different ways — you can have a football game going with a bunch of dads, next to toddlers in the bounce houses and 6-year-olds playing soccer while teenagers take batting practice and a mom soccer league battles it out.

And nobody is going to bump into one and other.

The turf isn’t green carpet on cement. This is the most state-of-the-art turf out there; when you fall, it doesn’t rip up knees or crack open heads. It’s padded and easy on the bones and joints.

There are leagues for those ages 18 months to 60 years old. There is a new NBA-style basketball court, which also doubles for a place to take classes. It also has party rooms for birthday parties, new bounce houses and a physical therapist/trainer always on duty.

We are a mosh pit of development in our house. With a 1-year-old, a 5-year-old and a 14-year-old, there isn’t a lot we can all do together. At Accelerated Center, all three kids can do their own thing at the same time and leave happy, exercised and tired.

This week Accelerated is hosting a Spring Break, where free play time is at a premium, with balls, bounce houses, hula-hoops, camps and classes. If you need something to do with your kids or yourself after you get away from the kids, at $10 for non-members and $5 for members, Accelerated Center is a healthy, fun and safe alternative to add to your “kid activity list.”