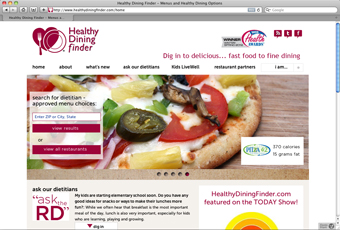 Young families dine out frequently and children enjoy having their own menu. But when you think about a traditional kids’ menu-mac and cheese, fried mozzarella sticks, hot dogs and grilled cheese-it won’t win any nutrition awards.

The National Restaurant Association says yes. It partnered with nutrition website HealthyDiningFinder.com to create the Kids LiveWell program, which sets standards for healthier kids’ menu items for both chain and independent restaurants.

“Kids LiveWell is about making the healthful choice the easier choice. It’s for providing, not just healthful options, but different options that children will love,” explains NRA director of nutrition, Joy Dubost, Ph.D., RD. She points to sliders made from bison meat, pasta dishes and grilled chicken with dipping sauces. “We’re really beginning to diversify what’s offered for children.”

Fresh fruit and vegetables are emphasized. Entrees are limited to 600 calories, no more than 35 percent of which can be from fat.

Practicality also was considered, and taste was paramount. “If the kids don’t eat it, it won’t work.”

Kids LiveWell launched in July 2011 with 19 restaurants. Now more than 100 brands are participating with almost 30,000 locations.

An app for that

The NRA’s What’s Hot in 2012 survey of 1,800 chefs from the Culinary Federation was eye opening. Chefs named healthful kids’ meals third out of 220 trends. “Consumers are demanding them and the restaurants are responding,” explains Dubost.

Dubost points to the free Kids LiveWell app (which is geo-coded) for Android and iPhone devices. “Parents can quickly look on the app and see what restaurants provide those healthier choices.”

Luckily, it’s easier than before to find healthful menu choices for children even if the restaurant at which you’re eating is not a Kids LiveWell participant. Try:

The March Fourth movement is now a non-profit organization with the mission to federally ban assault weapons.
Read more
Outdoors