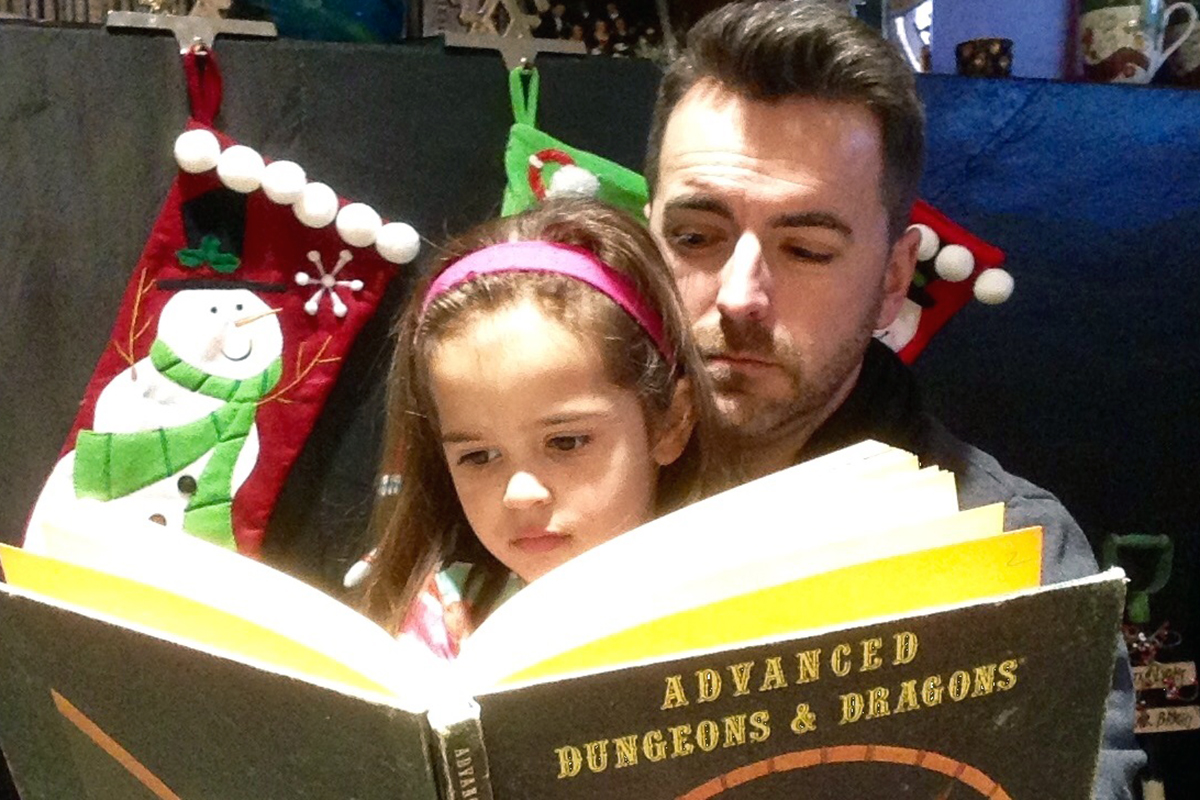 This week’s blog post is by The Paternity Test co-host Matt Boresi, who lives in the Edgewater Glen neighborhood of Chicago with his wife (“Professor Foster”) and their 5-year-old daughter, Viva, who needs a place to buy her dad a new twelve foot scarf.

We are all geeks now, are we not? Once, not so long ago, fans of fantasy, sci-fi, gaming and the like had to get their fixes not on licensed products in the toy and clothing aisles of Target, but in suburban rumpus rooms bedecked with pewter figurines. The Multiplex wasn’t filled with comic book adaptation after graphic novel adaptation; genre exposure came via late Sunday night airings of (old school) Doctor Who on WTTW. “Cons” weren’t widely trafficked family affairs at McCormick Place filled studded with current TV and blockbuster movie stars, they were modest gatherings in Rosemont hotels where outcasts traded VHS tapes of the fabled “Star Wars Holiday Special” and muttered about watching “C-beams glitter in the dark, near the Tannhäuser Gate.”  Geekery–and geeky parenting–has become mainstream, as I’ve written about here before. I see families cosplaying together, trick-or-treating in costume together, throwing May the 4th parties and dads at the gym trying to fight the Dad Bod in Spider Man Under Armour. (Admit it, that was you, wasn’t it?)

So what to get your favorite geek dad or mom this Christmas? The Windy City may be doing its best to freeze you like the Klingon slave mines of Rura Penthe, but it’s got you covered on nerdy gifts!

For the video gamer

Forget modern gaming with its networked play, celebrity voiceovers and photorealistic graphics … too many bits, too many boops, too many buttons. Give me a cartridge I can blow on!

Head to People Play Games on North Clark and get Dad that TurboGrafx-16 with Bonk’s Adventure he always wanted as a kid.

For the anime fan

Your wife is tired because she is up all night watching “Attack on Titan.” Go get your favorite Otaku some Pocky sticks and a Chibi cellphone charm at the whimsical Nakama Toys on California between Fullerton and Logan Blvd.!

For the toy enthusiast

Anyone who doesn’t want some M.U.S.C.L.E. figurines or some sealed Hulk Hogan’s Rock ‘n Wrestling trading cards for Christmas is dead inside. Andersonville’s Rad Vintage has all that, plus replacements of those Burger King “Return of the Jedi” drinking glasses you broke 33 years ago.

For the analog gamer

Adult board games that take four hours to play aren’t just for Germans. Although, if you know some Germans, invite them over to try and defeat Lo Pan in the “Big Trouble in Little China” game you bought at Uptown’s Chicagoland Games: Dice Dojo! They supply games, cards, hobby supplies and more.

For the comic book collector

Films don’t create intellectual property for themselves–they steal it from comics! Third Coast Comics might not be Chicago’s largest comic book store (Hell, it might be the smallest), but I always recommend this Edgewater/Rogers Park mainstay because it’s owner, Terry Gant, can help you find the perfect gift comics for whomever you’re buying for. Tell him the kinds of media your loved one likes, he’ll hand you the trades, books, floppies or hardcovers they’ll enjoy.

Seriously, this could be the coolest and easiest gift giving you’ve ever done.

For the Gen X music geek

Physical media, modern day rock zines, vintage posters and toys–you know, the stuff you used to live for? Well, it’s still alive at Bric-A-Brac Records and Collectibles. Someone in your life has a Descendents cassette tape on their Christmas list, they just don’t know it yet.

Everybody is hanging up art based around the simple, tasteful, eye-catching design of the Chicago flag. Wouldn’t someone you care about like something in that vein, but with an image of a Tie Fighter chasing a Red Line train? I’ve got a good feeling about it. Try Local Goods in Edgebrook, or its pop-up location in Rogers Park.

This year, don’t waste your holiday budget on expensive towers of boxed Riviera pears. No one has ever actually enjoyed eating a pear. Don’t throw your money away on Trump branded ties stitched by starving Chinese urchins–they put American tie-stitching urchins out of work! You know what your loved ones really want under the tree is a dusty Dark Tower board game, a collection of Rom: SpaceKnight stories or a vinyl dress-up Lynn Minmei. And remember, geek local!