Dance along to ‘The Nutcracker’ at the Chicago Cultural Center 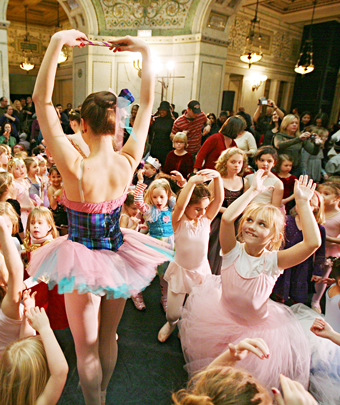 If you have a budding sugar plum fairy or toy soldier in the house, head to the Chicago Cultural Center on Dec. 3 for a little twirl with the ballerinas.

“Jennifer Minkin (founder of the ARCC ballet) teaches some really basic ballet moves to the kids,” says Angela Latkowski, program manager for the Chicago Office of Tourism and Cultural Events. “During the dance-along portions, she gets up and leads everyone in those moves taught beforehand.”

The one-hour show takes place following the workshop and is a combination of ballerinas performing solos and audience members being invited to dance along.

“There are lots of tutus, little toy soldiers, Santa hats, anything really holiday, Nutcracker-related,” Latkowski says. “There’s a live band playing, so adults get into it and dress in costume as well.”

For younger children, this is an especially easy way to introduce them to dance, Latkowski says. “For a lot of kids, it’s hard for them to sit still for an hour through any show. Here they can be involved and parents can get pictures and videos.”

The hall where the performance is held holds about 500 people and is typically at capacity. If you want to be near the front, arrive early, Latkowski says.