One Chicago Dad’s Guide to Carving a Pumpkin 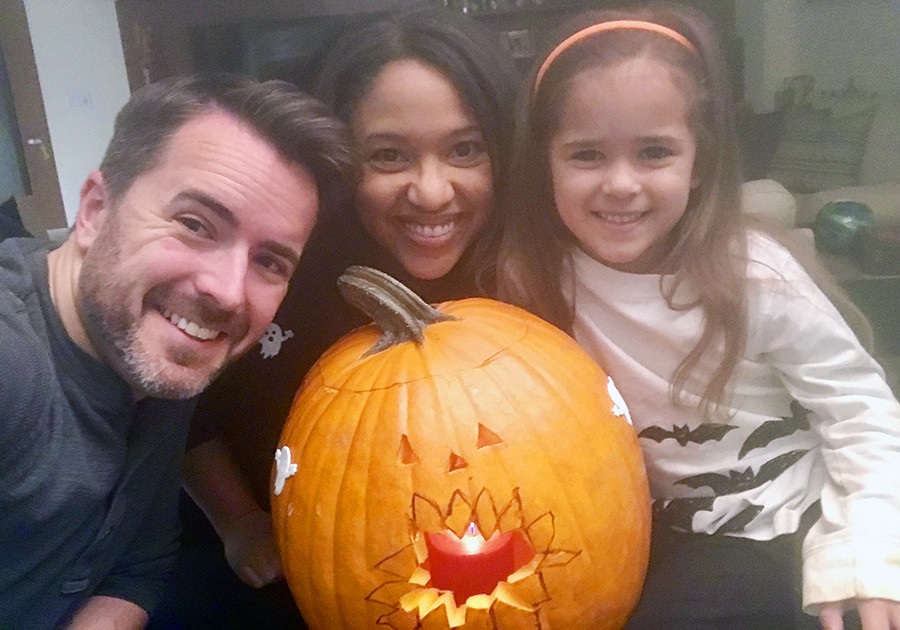 Holidays are weird. We celebrate them for hundreds, even thousands, of years until a game of Tradition Telephone ensues. The constant co-opting and grafting-on of celebrations by conquering religions and civilizations turns each formerly holy day into a mélange of rituals that makes very little sense.

Which brings us to pumpkin carving. The gourd disemboweling activity we all think we love. Every parent-to-be dreams of the day their children will be old enough to turn a worthless fruit into a putrefying objet d’art. The reality of the experience is a little less romantic and joyful than the dream. Let me give you a simple ten-step play-by-play of the pumpkin carving experience and you can decide for yourself if you’ll be scooping orange guts tonight.

Don’t be a sucker and shell out anything looking like real money for one at a pumpkin patch. That’s like chopping down your own Christmas tree; it’s a fool’s errand and your kid is just going to pick the biggest one they find and you’ll have to carry a fifty pound fruit a quarter mile to your car. Pumpkins are useless except for decoration. Think about it, their biggest moment is being made into pie — but pumpkin pies don’t taste like pumpkin, they taste like SPICES. The pumpkin is only there to give the pie it’s sludgy texture — which is the worst part of a pumpkin pie!

Because pumpkins are the filler of the natural world, you tend to just come into possession of them as fall wears on. My wife and I keep getting handed pumpkins at work and Viva keeps getting them at fall fests and school stuff. We haven’t paid for even one this year and yet we have enough pumpkins in our house now to … well, throw away en masse — which is what you do with pumpkins. If you must buy one, the closer you get to Halloween, the cheaper they get. Today they’re probably twenty for a dollar at Trader Joe’s. Tomorrow they’ll pay you to get them out of the parking lot. Wait until this coming weekend and decorate them to look like Squanto or Miles Standish or something and save yourself some dough.

This is why it’s really weird that anyone thinks this is a ritual for kids. It requires jamming cutlery through tough rinds and inevitably makes Dad slip up and have to hide how much blood he’s losing from the family. If step one involves Dad purchasing and hauling a pumpkin the kids lazily pointed towards, step two involves Dad cutting up that pumpkin while the kids play on their iPads.

Now make a mess. Since there aren’t newspapers anymore, just scoop the guts directly onto your carpet. The kids hate this part, mostly because it’s disgusting, smelly and takes waaaaaaay longer to scrape out all that weird Stranger Things dangly goo than you thought it would in your nutmeg-scented fantasies. They will continue to play on their iPads while you scrape and scrape.

This must be some kind of task children enjoyed when there were no TV or computers and everyone was illiterate and all there was to do was pull seeds out of pumpkin entrails and die while fording streams with a covered wagon. Sorting seeds is down there with sorting screws or sorting socks or pulling a needle from a haystack in the annals of fun. Your kids will not help.

Heat the oven to 300 degrees. The kids aren’t allowed to play with the oven and so cannot help. Heat the pumpkin seeds on a baking sheet for 45 minutes. Eat one, realize that unless you are a cardinal they are horrible as food, and throw them in the garbage.

Let the kids design the look. Of course, they’ll do a Google Image Search and come up with pumpkins that are a bas-relief of “Sunday Afternoon on the Island of La Grand Jatte” and make you attempt it, then cry when you fail. Also, they can’t use the knives, so they cannot help.

Because pumpkin guts aren’t gross enough — rub it all with petroleum jelly to seal in the moisture — this way you can be greasy forever AND smell like the inside of a melon. The kids will not help.

Light a candle and place it inside. Note where the candle sets the pumpkin on fire and grab your giant knife and cut a hole there to allow for the fire. The kids can’t help.

Step 9: Put It Outside Where You Can’t See It.

But the squirrels can, and so can neighborhood teens …

Because the pumpkin they didn’t help carve got eaten, smashed or just decayed into an oozing, moldy mess.

You thought it smelled bad intact? Have I mentioned your kid won’t help with this?

Ten easy steps for an inevitably effortful and disappointing Halloween. Watch this space next month when I show you how to blow up your garage while deep frying a turkey.

This article originally published on on Oct. 31, 2017. It has been updated with the most recent information.