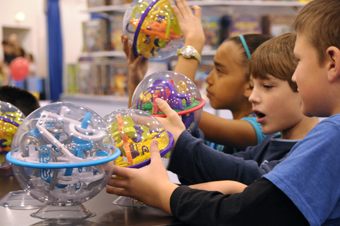 Christmas is coming early for Chicago area children, who are invited to Navy Pier Nov. 17-18 to play with more than 150 of the newest toys and games on the market.

It’s the 10th anniversary of the Chicago Toy& Game Fair, and this year promises more toys, more games and more fun for the expected 25,000 visitors.

Kids will get to play with the new toys on display, talk to the inventors and learn about the toy creation process.

“We had more feedback than ever last year from hundreds of parent bloggers who had a blast playing with all the toys and games and getting to talk to their inventors,” says Mary Kay Russell, spokeswoman for the Chicago Toy and Game Group.

This annual event always is a fun way to compile a holiday wish list, but it’s even more than that-and it’s only fitting that Chicago is the host.

“We’re celebrating the achievements of toy and game inventors from around the globe, and promoting the incredible benefits of play to the world at large,” says Mary Couzin, founder and president of the Chicago Toy and Game Group. “Chicago is the toy and game inventor capital of the world, so it’s the perfect place to tell our story and play together.”

In addition to opportunities to play with toys, events are scheduled throughout the weekend.

Brought to you by Star Cinema Grill
Read more
Health