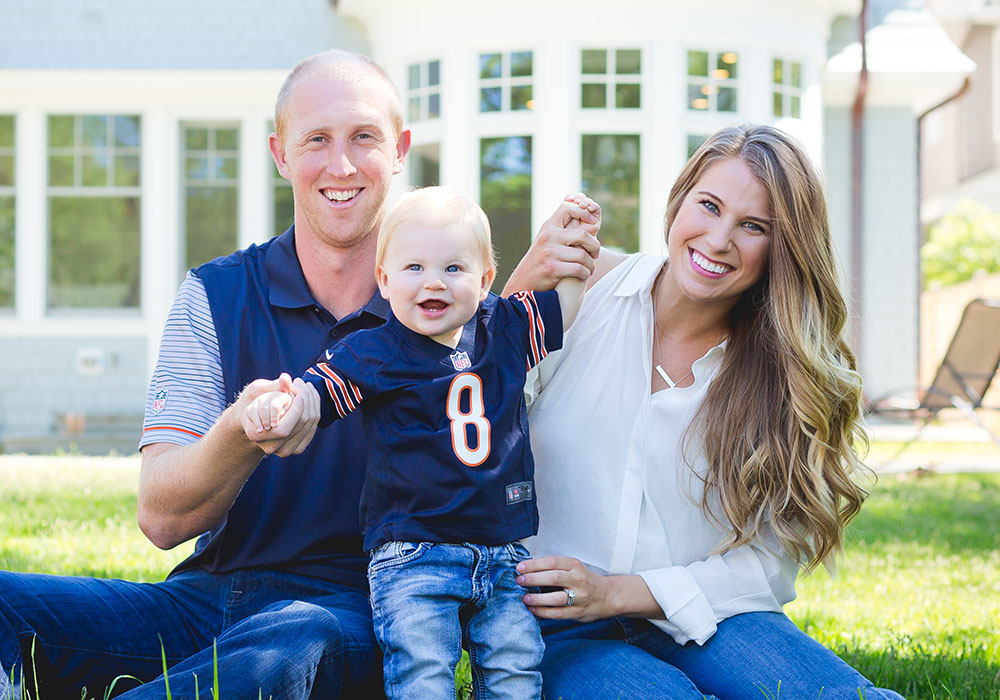 When Mike and Jessica Glennon began looking for their first home in the Chicago area, they did what any parents do when they want to make sure their child will have playmates in the neighborhood: they snooped.

“We were looking to see if there were young kids’ toys in yards—the plastic swingsets and things—to kind of gauge how old the children were around us,” Jessica says with a laugh.

But of course, the Glennons’ move to the area wasn’t your run-of-the-mill job transfer. Mike is the new quarterback of the Chicago Bears, taking the spot of the oft-controversial Jay Cutler, so the shift from Tampa Bay to Chicago was significant, to the Glennons and to scores of victory-starved Bears’ fans. And the temperature alone—moving from Florida’s temperate climate to Chicago’s more ferocious one—may prove to be a major challenge, especially considering that the family doesn’t currently own any winter coats.

From the moment Mike signed a contract with the Bears in early March, life has been a bit of a whirlwind for the young family, who arrived in Illinois and immediately jumped into a high-profile life, even throwing out the first pitch at a Cubs’ game in April.

“It’s been great,” says Mike, 27, talking from the family’s sparsely decorated home (the furniture had yet to be delivered) on the Northshore. “Everyone has been really friendly. You just feel the level of importance of the Bears tradition around here.”

It’s a tradition he hopes to pass along to his son Brady, 1. Although the little guy isn’t quite ready to start tossing the pigskin with his old man—most toys nowadays go directly into the baby’s mouth—both Mike and Jessica agree that if Brady wants to follow in his father’s footsteps and play football, that would be OK with them.

“We’re not against it like some parents are,” Jessica says. “If he wants to play, that’s his sport.”

The way Mike describes his mini-me—“he’s got a lot of energy; he’s nonstop, always moving around, always playing” —makes it sound like Brady might be a QB in the making. And while the Glennons insist that he wasn’t named after Mike’s New England counterpart, sharing a name (and birthday) with the reigning Super Bowl MVP certainly can’t hurt his prospects. (For the record, Jessica’s love of HBO’s “Sex and the City” actually inspired his moniker.)

But even if Brady doesn’t want to play football, Mike hopes he can share his love for the game with his son in other ways.“One of the things I always thought was cool is when you see players bring their kids after practice and then play out on the field with them,” he says. “That’s something that I think will be good memories and something that we will do.”

Timing-wise, at least, Brady is a football baby. He was born last August, in the middle of preseason training camp, making the first month or so of his life tricky to juggle, since Mike wasn’t home for much of it. But now they’ve settled into a normal routine, with Jessica handing off the baby when Dad gets home from work, just like many other families. Although in their case, Dad is coming from Halas Hall, not a corner office.

“It is so helpful having him around because he’s a great dad and so hands-on,” Jessica says. “It definitely strengthened [our] relationship, I would say.”

Brady’s arrival was a happy surprise for his parents, who had been married for less than a year when they found out Jessica was pregnant. Both Mike and Jessica come from families with three kids, and they knew they wanted three or four children. But Mike, for his part, didn’t actually have much experience with babies. At 26, he was the first one of his family and in his friend group to have kids.

“Our handoffs were a little rough the first two or three days,” Jessica adds with a laugh.

Despite his rookie status as a dad, Mike already is applying football principles to fatherhood—although he says holding a baby is not like holding a football, despite what his former quarterback coaches might have said. For instance, working together with Jessica to raise Brady has given him a new outlook on teamwork.

“Football teaches you a lot of good qualities for life,” he says. “There will definitely be a lot that I’ll try to pass on to him through my experiences.”

Both Mike and Jessica say their favorite thing about having Brady—apart from “everything,” of course—has been seeing him reach different milestones, from the first smile to the first step.

Mike has especially appreciated how Brady’s cheerful demeanor helps him on hard or stressful days.

“When he starts giggling, it’s like everything could be wrong in the world and it immediately makes you happy again,” he says. “Say I have a bad game—everyone has a bad game—you come home to him smiling, everything’s OK. That will be something I look forward to.”

Of course, Bears’ fans hope, as does Mike, that those bad games are few and far between for the Monsters of the Midway. But fatherhood has also affected Mike’s perspective on winning and losing.

Now that he has a wife and a child, he’s motivated to make them proud through his work on the field. And seeing as Bears brass, including head coach John Fox, have repeatedly praised his work ethic and leadership qualities, it seems that motivation is working.

“It just feels like you have a higher level of responsibility,” Mike says.

Good news, then, that Jessica and Brady plan to be at Soldier Field on Sept. 10, when the Bears take on the Atlanta Falcons in the first home opener of Mike’s tenure as quarterback.

“I think playing at Soldier Field will be awesome,” Mike says. “The main thing [I’m looking forward to] is playing, going on with the team, going to battle, and playing for such a historic franchise with great, loyal fans. … I hope we win a lot of games and that people have a good time watching us.”

And although no one knows exactly how long the Glennons will be in Chicago, they’re already thinking about the future. Jessica, a North Carolina native, is looking forward to a white Christmas for the first time in a while, while Mike is excited to play basketball with his son on their house’s driveway (once the toys-in-the-mouth phase is over, of course). And Jessica openly admits that she can already envision walking Brady to school in a few years’ time, past all those neighborhood swingsets they so carefully staked out.

They’re also impressed with the plethora of family-friendly activities in the area, from Kohl Children’s Museum to the Lincoln Park Zoo and the Chicago Botanic Garden, and are looking forward to experiencing them with Brady when he’s a little bit older.

“This would be an awesome place to raise a family,” Mike says.

But before they get all those outings on the family calendar, they’re probably going to want to schedule a shopping trip. Because as any true Chicagoan knows, Soldier Field can get downright freezing during the season. And to really fit in in Chicago, three winter coats—for Papa Bear, Mama Bear and Baby Bear—are most definitely in order.