You Are Beautiful art installations around Chicago 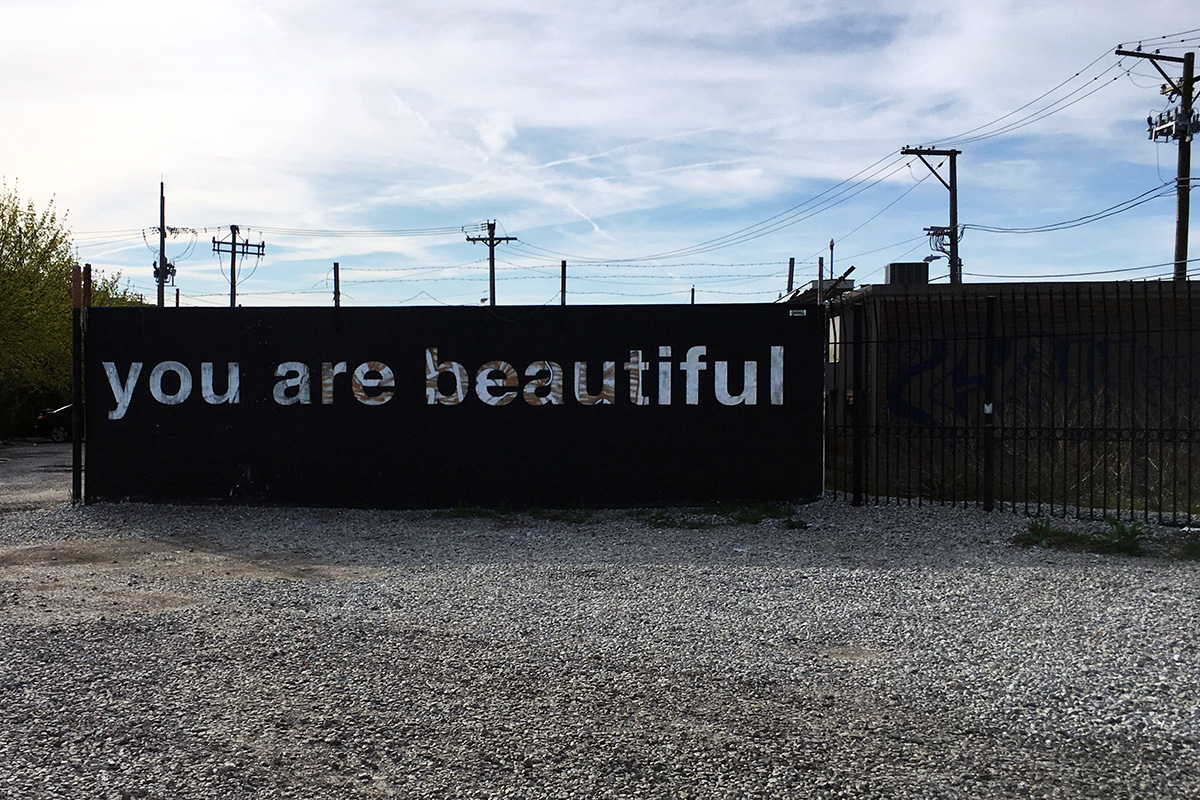 The first time I remember seeing the words “you are beautiful” in the way I’ve come to recognize it was the year I moved to Chicago. It was 2003 and I was new to a city where I knew almost no one with the exception of an uncle living out in Berwyn. Having traded my crappy car for a crappy bike, I had just narrowly missed being doored on my way to Wicker Park and was still shaking from the experience when I looked down to lock my bike and saw that little silver sticker facing up at me. It felt silly to feel impacted by it at the time, but it really made me feel better. For just a moment, I felt a little less alone in a new place that has since grown to be my home.

I had no idea at the time, but the message was gaining momentum. Lincolnwood-based artist Matthew Hoffman initially founded the “You Are Beautiful” movement when he moved from Ohio to remind people that they have value and to bring positive vibes to the city of Chicago. What started as a small batch of 100 stickers and a simple website in 2002 quickly evolved into a worldwide movement with stickers, buttons, collaborations, installations and exhibitions.

Today, there are dozens of large public art installations around the city where the beautiful message can be found, from a billboard in Andersonville to a fence in Englewood. Just as the movement has grown, Hoffman’s body of work has also expanded to include more words of encouragement and commissioned installations, including:

– A series surrounding empty lots on Chicago Avenue in Humboldt Park. On the west side it reads “keep it simple, keep trying, keep moving, keep learning, keep pushing, keep going, keep it up, keep at it,” and on the east side, it reads “make it now, make a life, make it good, make it matter, make moments, make memories, make meaning, make anything.”

– “Find Adventures,” an installation for the City of Chicago behind the circulation desk at the main entrance of the Edgewater Library.

– “Anything is possible,” a visual love letter to the City of Chicago for the #goodcities project.

– “Just Make,” a reminder to make good work in the lobby of the Havas Agency.

– “Love,” a mural commissioned by @properties and featured on a building in Bucktown.

– “Do more with less” – a mural for Zappos featuring their core value.

– “Important to Be Nice,” an installation at the Cards Against Humanity office featuring a favorite phrase by the father of the game’s co-founder Max Temkin.

To learn more about Matthew’s work or to find a map of his public work and stage your own Instagram-worthy photo, check out his website here.

You can also join the YAB movement and spread the good vibes around by picking up a pack of stickers on the You Are Beautiful website, crafting your own or by sending self-addressed stamped envelope to: You Are Beautiful PO Box 220175, Chicago, IL 60622.

Natalie Dal Pra -
Want to enjoy a mid-morning meal with the whole family at a fun spot in Chicago or the suburbs? Look at this list of places to try out.
Read more
Special Needs

Enjoy some sensory-friendly fun in the city and surrounding areas.
Read more
At Home