The Best ’80s Disney Movies For Kids to Watch Today 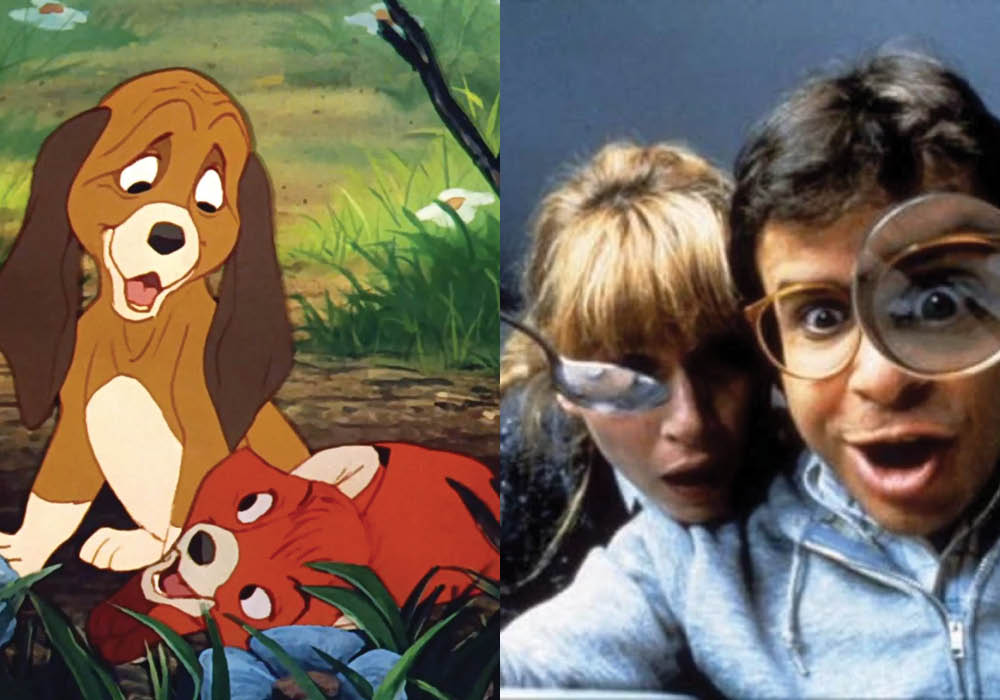 After your 56th viewing of Frozen, Frozen II or Toy Story 4, it might be time to open up the Disney vault. Let your kids in on a little of your own childhood with revisits to some favorites from almost 40 years ago. Some have stood the test of time, while you’ll enjoy seeing others through the eyes of a parent.

The buddy film includes the voices of Mickey Rooney as the fox (Tod) and Kurt Russel as the hound (Copper). An unlikely pair, an orphaned Tod and hunting dog Copper meet as youngsters and form a friendship. Eventually, Copper becomes quite the hunter and swears to catch Tod, though the fox lives on a game preserve, severing the friendship. The two come together again, as the movie hits a climax that questions the deep ties of life-long friends.

Disney took a turn into fantasy film with the animated adaptation of a book series by Lloyd Alexander. The film follows the trek of Taran and his pal Princess Eilonwy who try to keep a magical Black Cauldron and its powers from a tyrannical Horned King. This PG is definitely for mid- to late-elementary audiences, as littler eyes might not follow the winding plot line.

An animated Sherlock Holmes adaptation, Basil the Mouse lives in the residence at 221B Baker Street and uses Holmes’ dog, Toby, to help solve crimes. In this case, he’s searching for the father of a young mouse named Olivia Flaversham, who was kidnapped by Professor Ratigan, Basil’s nemesis. The mouse-eye view of London is fun for fans of all ages.

Billy Joel lent his voice as Dodger the dog in the animated retelling of Oliver Twist. Oliver (the voice of Joey Lawrence) is an orphaned kitten who is taken in by a pickpocket and his gang, then befriends a young girl and tries to avoid robbing her house. The music is legendarily 80s with Bette Midler, Dom DeLuise, Cheech Marin and Robert Loggia helping to round out the cast.

Work on Disney’s The Little Mermaid began with the success of Snow White and The Seven Dwarfs in the late 1930s, but was shelved for varying production reasons. It was unearthed after production of the new animated film was approved in the 1980s, which retells Hans Christian Andersen’s tale of a mermaid who loves humans and the lengths she’ll go to for a chance to walk where the people are. It’s possible Andersen didn’t imagine his story with a reggae beat. Ariel remains one of Disney’s more popular princesses.

Produced in partnership with Paramount Pictures, Popeye was the first starring film credit for Robin Williams, who played the title character. The musical is based on the comic strip characters originally drawn by E.C. Segar in the 1920s and 30s. Kids used to CGI will not be impressed by the under-done effects of Popeye, but the music sets it apart as it tells the story of the Sailorman, Olive Oyl and their sweet Swee’Pea. After you see the movie, take a visit later in the summer to the Popeye Character Trail in Chester.

Starring Jeff Bridges and Bruce Boxleitner (who returned for the TRON: Legacy sequel in 2010), TRON tells the story of a computer programmer who tries to hack into his former company’s mainframe and is then “beamed” into the game he built. The movie was considered impressive for its use of special effects, but not nominated for the visual effects category at the Academy Awards, because it was considered “cheating” to use computers to aid in the effects process.

In 1947 Hollywood, where cartoon characters and humans coexist, ‘toon Roger Rabbit is framed for murder and hires a down-and-out detective (Bob Hoskins) to prove he is innocent. Mind the language on young ears. The merging of animation and live action for an entire film was widely praised, and it was the first appearance of Mickey Mouse and Bugs Bunny on screen together.

An inventor (Rick Moranis) accidentally shrinks his kids and the neighbor’s children from people-sized to six inches tall. The hilarity that ensues helped lead the comedy/science fiction film to a franchise that included Honey, I Blew Up the Kid and Honey, We Shrunk Ourselves in the ’90s.