A next level winter project for gamer dads 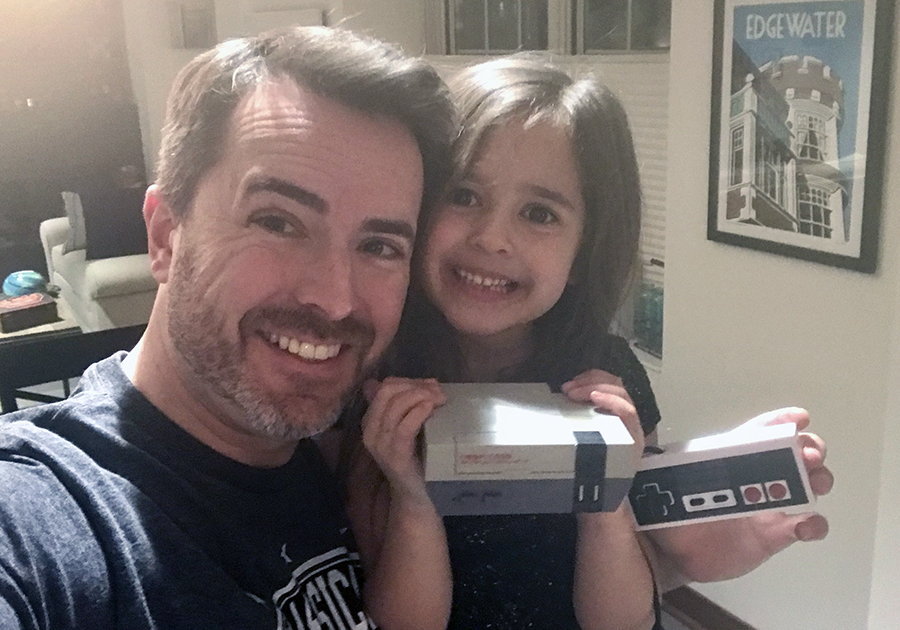 This week’s blog post is by The Paternity Test co-host Matt Boresi, who lives in the Edgewater Glen neighborhood of Chicago with his wife (“Professor Foster”) and their 6-year-old daughter Viva, who may be young but who knows what’s up, up, down, down, left, right, left, right, B, A, Start.

It snowed last night, it’s nine degrees out this morning, and winter is just getting started. You need a project to keep both you and the kids from going full Jack Torrance. Well, for under a hundred bucks I’ve got a maker-y craft you can do with the kids that will pay off with hundreds — maybe thousands — of hours of hella cool ‘80s-style fun: You’re going to build a Nintendo.

Remember in the last two years when Nintendo tried to release a “Classic NES” with 10 games and a “Classic SNES,” but kind of neither one ever really came out? What if I told you it’s easy to build your own NES (or SNES, or Sega, or Atari or Turbografx if you’re that one dude who’s dying to play “Bonk’s Adventure”)? Well, you can and you should, and you’ll end up with not only an NES you needn’t blow into to make work, you’ll be able to share all our childhood games with your kids, and potentially have a Nintendo that plays, well, every game that ever came out for the Nintendo. (Including lots of staggeringly bad ones. But also Mario III, which is perfect and never gets old.)

Building this thing is going to be fun for you and the kids. Playing the games is, of course, fun, and you’ll also learn the fundamental aspects of building and programming a computer in a way which should benefit both your child and you. I didn’t know how this stuff worked until I dove into this project.

This project is all built around a small piece of open source hardware called a “Raspberry Pi.” Say what?! Let me slow down … a Raspberry Pi is a tiny set of computer guts. You can buy it online for a pittance, but if you’re looking to spend your money at a small Chicago business, you can get a great starter kit at Chicago Electronic Distributors.

The Pi itself if only $35 ($45 with a power source, case and OS if you want it), although you’ll need some other stuff. The Pi is just a brain with nothing to think about — so you’re going to make it think with “RetroPie” which is an “image” featuring “emulators” built on an “operating system.” Think of it as your OS and you can download it for free to your computer. (All the instructions you need — more thorough than I’m listing here — are at that link.) You’ll need a micro SD card ($10) and an adapter ($9) and you’ll need to download (free) software like Etcher to write Retropie onto the SD card. Oh, and you’ll need an HDMI cable ($6) if you don’t already have one. Write Retropie to the SD card using Etcher, then plug that into the Raspberry Pi, using your computer’s monitor and keyboard and mouse to talk to the Pi. (‘Cuz the cake don’t understand.) Retropie is lousy with “Emulators,” which means software versions of game systems, like the NES. Now you’ve got a tiny computer that’s an NES (And most other games systems from about 1978-2000).

We put our Raspberry Pi into a 3-D printed case ($10) that looks just like a tiny NES. There’s some screwdriver-ing and plugging in involved that’s fun for even little kids. Now you can make your little NES talk to your TV via the HDMI cable, and you’ll need controllers. I got some cheap USB versions of NES controllers ($12), though if you shell out more you can get Wireless SNES controllers (with more buttons). All that was about $85 bucks, and you might already have some of the above.

The last thing you’ll need are the software versions of the games, known as ROMS. I’m not sure of the legal implications of downloading these games, though internet folk law says you can download any game you already own because it constitutes a “backup.” How you proceed here is between you and your old school video gaming god. Google “ROMS for RetroPie” to find many, many sites with these games available. You can download them to a thumb drive which goes directly into your new NES and the “Emulator” reads the games.

That’s it. Now you can introduce your kids to characters they might have thought started with “Super Smash Bros” but which have a history dating back to the second Reagan administration. Samus, Kid Icarus, Lolo, where have you been my adult life? Your child will marvel at how you still know where every “Spread” gun is located in Contra and Super C. They’ll gnash their teeth on the impossible swimming levels of “Teenage Mutant Ninja Turtles.” They’ll hug you as you get wistful remembering what level of “The Adventures of Bayou Billy” you were playing when the San Francisco-Oakland Bay Bridge collapsed in 1989. It’s a trip down pixelated memory lane.

Sure, some things don’t hold up. A lot of games were rushed to market (Hello, “Back to the Future”), some barely functioned (“Dragonlance”) and others are just headscratchers (Who thought ‘80s kids needed a “Gilligan’s Island” game, exactly?). But the great ones — the three Super Mario Games, the Contra games, Duck Tales, Rescue Rangers, River City Ransom — these games are as classic and immortal as tic-tac-toe or hide ‘n seek. (Which is itself only slightly more immoral than “Rush ‘n Attack” for NES).

Tell Alexa to play some Fine Young Cannibals, UB40, Billy Ocean and Rob Base, and sit down with the kids — it’s possible you won’t get up again before spring. Maybe next week I’ll post an Ecto-Cooler recipe so you’ll have something to drink while you try to defeat Gannon and Dr. Wiley, and explain to the kids who “Mike Tyson” was.

How a mom of two tuned into her needs and is now laughing throughout Chicagoland with Bad Momz of Comedy.
Read more
Sponsored Content

Brought to you by Academic Approach
Read more
Travel

From Kings Island to Medusa's Slidewheel and more, here a few last-minute excursions to enjoy with the kids before the new school year.
Read more