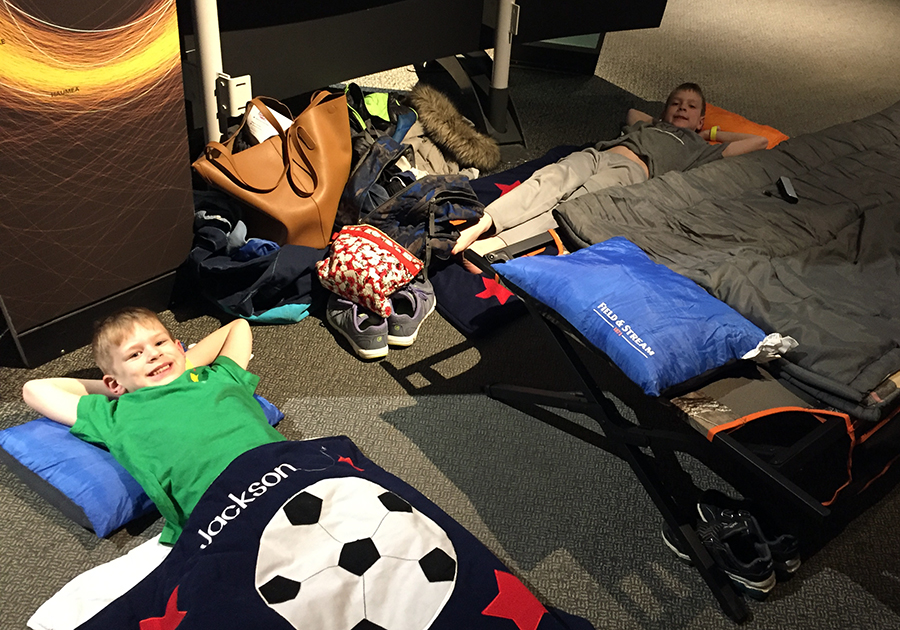 About a week out from taking my 6- and 8-year-old nephews on our very first Astro-Overnight at Adler Planetarium, the questions began in earnest. No, they weren’t from my young charges, curious though they may be. These incessant inquiries came from within, and they were mostly of the “have you lost your ever-loving mind?” quality.

Spending a night at a museum – especially one of Chicago’s very best – sounds fun, in a Ben-Stiller-made-this-look-good kind of way. But let’s face it, the reality of actually sleeping where a billion tourists have previously trod doesn’t exactly sound movie-star glamorous. And I had my fair share of trepidation about whether this family favorite tradition would be all that it was cracked up to be.

Well, here I am on the other side of our Astro-Overnight, and I can attest that while we’re not likely to make museum overnights an every-weekend experience, we really did have a blast (and caught a few zzz’s after all). So here are the answers to a few more questions that arose during our Astro-Overnight prep – once I got beyond “Am I actually crazy?”

What do you do all night?

Check-in for Astro-Overnights starts at 5 p.m. and you don’t leave until 8 a.m. the next morning. That is a lot of time to spend anywhere, even a world-class destination like Adler. But don’t worry, the Adler crew knows what they’re doing. Based on your wristband color, you’ll be assigned a showtime for the awesome “Destination Solar System” show, a big hit with adults and kids alike. You can also catch a sky show, if you’d like. Workshops are ongoing throughout the evening – my boys really enjoyed designing their own hovercraft and testing it in a wind tunnel – as is telescope viewing (both inside and out). We were amazed to spot Venus with our bare eyes (and some assistance from staff). There’s also a scavenger hunt – with prize – to complete before bedtime. And that’s not even mentioning all of Adler’s already awesome exhibits, like Planet Explorers, Mission Moon and Our Solar System. Don’t worry: there’s more than enough to keep you busy all night long.

There’s an option to pre-order dinner and eat once you arrive, but if you’re a cheapskate like me, you can definitely go the drive-thru route on your way to Museum Campus. There is a nighttime snack that allows for a little breather, as well as breakfast (think cereal, fruit and muffins) in the morning. And don’t worry, overtired parents: coffee is plentiful.

Do you actually sleep?

I will admit, sleeping in close proximity to a bunch of strangers is not exactly a fun experience. But it wasn’t nearly as bad as I anticipated/dreaded. Was it the best night’s sleep of my life? Not by a long shot. But with the help of a magical little device called earplugs, I was able to drown out the sound of nearby snorers and get a few hours under my belt. Fortunately, Adler allows both twin-sized air mattresses and camping/army cots for the overnights, so you don’t have to sleep on the floor if you don’t want to. And it did get a little chilly, so make sure your sleeping bags are up to the task. Although the official wake-up call isn’t until 6:30 a.m., the place starts to liven up sometime around six, so don’t expect a sleep-in.

What do you wear?

Although I did see some littles change into their jammies for bed, the vast majority of people slept in what they wore all night. So for me, that meant yoga pants and a t-shirt, with a button-up shirt on top. If you’re not a fan of sleeping in jeans (and who is?) I’d recommend this soft-pants approach. Comfy shoes are also a must.

What else should I bring?

Apart from the aforementioned earplugs, the best thing I brought was my portable phone charger. There are electrical outlets throughout the museum, but you might not be able to snag one of these prime spots for your sleeping area – and my phone was on its last legs after snapping so many pics of the fun we were having. And while I did bring a few toiletries, there’s not really much chance to wash your face or brush your teeth, so if you have face wipes or other on-the-go products, this is their opportunity to really shine.

Anything else I should know?

– There are family bathrooms, which are especially helpful if you, like me, are the solo adult with opposite-gender children.

– There’s something called Storytime Under the Stars at 11 p.m. (told you you’d be up late!), but it can be difficult to hear from certain locations, like the planet gallery.

– Although check-in starts at 5 p.m., we didn’t arrive until 6:45 p.m. due to Friday night traffic, and we still had more than enough time to do everything we wanted during the Astro-Overnight.

– Parking is available for $25 in the lot directly next to Adler, so you won’t have to worry about lugging your gear all over Museum Campus.

What was it like to fall asleep directly beneath Pluto?

Thanks to the Astro-Overnight, I can say with confidence: It. Was. Awesome.

Next available event: Friday, May 4