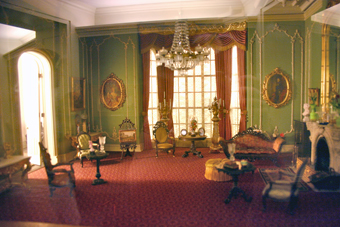 Chicago is a city filled with amazing museums. Some of them are natural destinations for families with young kids.

But what about the Art Institute? Arguably, this august institution is among the city’s richest treasures. It is a world-class museum, but without dinosaur skeletons or model trains, it lacks some of the natural kid-friendliness of other local museums.

Yet when my daughter was in second grade, she begged us to take her to the Art Institute. Why? Because it was the setting for one of her favorite books: The Sixty-eight Rooms by Marianne Malone.

The Sixty-eight Rooms is about two sixth-graders who find a mysterious key in the Thorne Rooms exhibit at the Art Institute while on a school field trip. One of the museum’s most popular exhibits, the Thorne Rooms are a collection of 68 miniature rooms.

The Sixty-eight Rooms reflects the city’s love for this charming exhibit. In the book, the two main characters shrink to the size of the Thorne Rooms to enter them. What child looking at these miniature rooms has not dreamt about doing the same? Add a mystery (or two) to solve and you have an irresistible read.

The Thorne Rooms themselves exceeded expectations. Our daughter was utterly enchanted while our son, 5, was caught up in the magic, too.

A complete tour of the Art Institute’s extraordinary collection may not be for every child, but the Thorne Rooms can be. They are easy for children to access and their beauty is evident to visitors of all ages.

Here are tips from the nation’s leading scholars on race, democracy and inequality.
Read more
Advice