6 unique places to explore in Illinois 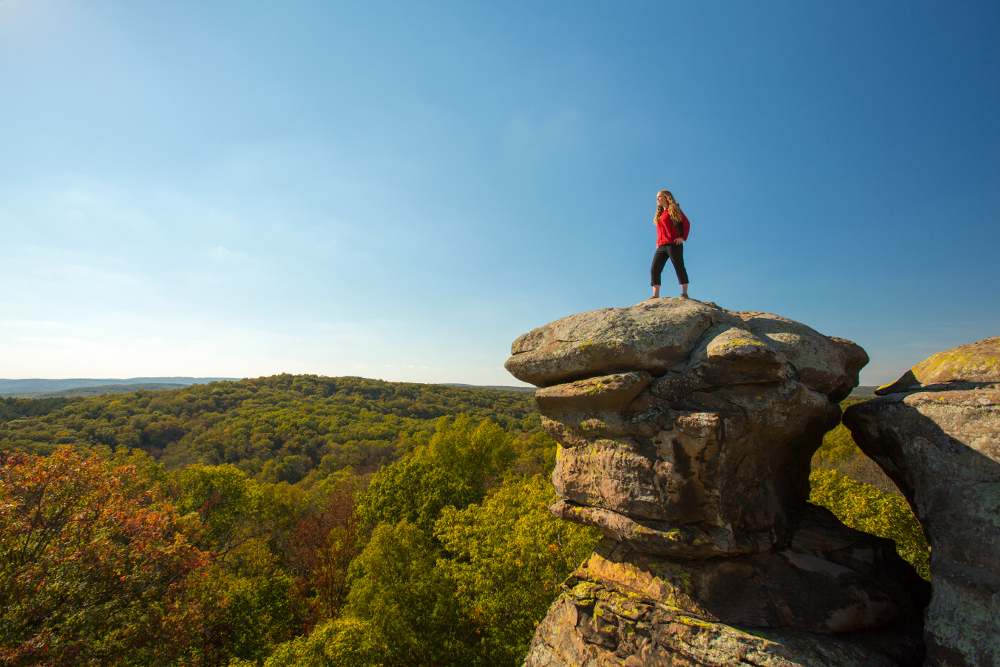 As the state prepares to celebrate its bicentennial, explore some of the more unique and interesting Illinois locations with your family.

If you’re visiting Cahokia Mounds, you’re also near a very different kind of monument—the “World’s Largest Catsup bottle,” or what is really the Brooks Water Tower painted to look like a catsup bottle. (It’s trademarked with the spelling “catsup” but if you prefer “ketchup,” no judgment here). While it’s not exactly archaeologically significant, it’s pretty exciting for some condiment lovers.

Many, many centuries before Illinois was a state, it was home to the most sophisticated prehistoric native civilization north of Mexico. Cahokia was larger than London in 1250 AD. You can explore the remaining mounds and examine artifacts at Cahokia Mounds State Historic Site, the only UNESCO World Heritage site in the Midwest. Dozens of mounds remain, including Monks Mound, which at 100 feet high is the largest earthwork in North America. You can climb the steps to the top. Seeing the Gateway Arch in St. Louis is a fascinating juxtaposition of civilizations for the adults. For the kids, it’s just a cool view. The free Interpretive Center offers exhibits and information on Mississippian culture and explains archaeological and anthropological research conducted at the site.

Casey, in east-central Illinois just off I-70, calls itself a small town full of big things. It’s home to a lot of Guinness World Record winners, including the world’s largest rocking chair, golf tee, wooden shoes and knitting needles, which have actually been used to knit. Kids can stand inside the world’s largest mail box, a 32-foot-tall structure. It’s fully functional, and the flag even goes up, but don’t worry, the Postal Service doesn’t ship children these days. Other giant items found around town that provide interactive fun include the world’s largest wind chimes that you can ring and the gigantic bird cage.

One town in Illinois is home to a superhero. On June 9, 1972, the Illinois House of Representatives officially proclaimed that Metropolis, a town in southern Illinois along the Ohio River, was the hometown of Superman. Visitors learn pretty quickly that they’re serious about Superman here, as evidenced by the 15-foot-tall statue of him in town, the Super Museum and the fact that the newspaper is named The Planet. There’s a Superman Celebration held annually in June, but really, Metropolis pays homage to the superhero who’s faster than a speeding bullet every day.

Garden of the Gods

The Shawnee National Forest is in southern Illinois and features Garden of the Gods Recreation Area, one of the most photographed locations in the state. Full of cliffs and crevasses, the landscape is other worldly. The stunning sandstone sculptures that make up Garden of the Gods first formed more than 300 million years ago. There are many trails, with Observation Trail, a quarter-mile trail to the top of the bluffs, being the most popular.

Did you know you could ride on a mule-pulled canal boat? It’s the closest you’ll get to traveling back in time to 1840 and taking a ride on the I&M Canal on a mule-pulled boat. Learn about a unique time in history and enjoy the scenery. The Lock 16 Café & I&M Visitor Center is in LaSalle, just five miles from Starved Rock State Park. It’s a restored vintage building that used to belong to a buggy maker and now serves a hub for canal-related activities.

What’s the secret to igniting a love of learning in your child? An appropriate early learning environment offers many advantages of preschool, says an expert from Smart Love Preschool.
Read more
Advice