Why We Get ‘Mom Crushes’ and What to Do About Them 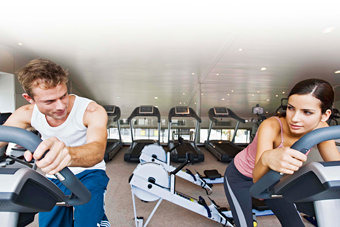 I’ve been working out at my local Y for the last decade and know dozens of members by sight, if not by name. Several years ago, I noticed a handsome man a little older than myself. He was tall, fit and had thick, dark-blond hair. I’d seen him running on the treadmill or lifting weights. Let’s just say that I noticed he was taking good care-very good care-of his physical self.

One day when I was running on the track, he fell into step with me. “Mind if I run with you? You look like you’re going about my pace.” We eased into conversation as we ran together. He was funny, self-effacing and sounded like a good dad-the kinds of things I find sexy in a man. By the end of our run, I had a full-blown crush going.

In the following weeks, I took special care before I went to the gym, applying mascara and lipstick (which I would sweat off) and made sure I wore my cutest workout gear. When I saw him, I’d feel tongue-tied and silly, and hoped we’d get a chance to talk again. I entertained fantasies about him (although in my mind I conveniently ignored the fact I’m happily married) and even dreamt about him a couple of times.

Alas, after a few months, he disappeared. Maybe he moved away. Maybe he started working out at a different gym. Maybe I scared him off! But when I shared this story with my friends, none were shocked. Several admitted to experiencing similar crushes of their own-though none of us had acted on them.

Sure, we think of crushes as something young girls or teens experience, but grown women can and do get them, too. It’s one thing to be on Team Jacob or Team Edward, but what about the crush you get on someone you actually know-say a co-worker, neighbor or fellow parent? Is it a sign that your marriage is in trouble? That you’re immature? That you’re doomed to cheat on your mate?

Not to worry-having a crush isn’t a character flaw but rather simply part of being human, say experts. “A crush is about letting you know that you’re alive and well and your heart still thumps,” says relationship expert Dr. Gilda Carle, author of 99 Prescriptions for Fidelity.

“Think of crushes as entertainment-they add excitement to life, and as long as you don’t confuse the fantasy with reality, they’re harmless,” says Tina B. Tessina (aka “Dr. Romance”), psychotherapist and author of Money, Sex and Kids: Stop Fighting about the Three Things That Can Ruin Your Marriage. “It’s usually an indication that something is missing, and the crush is a clue to what it is. Often, there’s a forbidden aspect that lends excitement. In teens, it’s emotional practice for later real-life experience, but in women, it tends to be exercising something that’s latent or lacking.”

Former Woodridge resident Stephanie Elliot, mom of three, admits to an infatuation with her son’s baseball coach. “I had a crush on this guy all through the baseball season when my son was in third grade, and unfortunately, my son only played baseball for one season, but then this guy, who I’ll call Jim (because that’s his name!), ended up showing up at the basketball games every year thereafter because he was an opposing coach. My husband coached my son’s team,” says Elliot.

What caused the attraction? “I had a crush on him because he was tall. I love tall men-my husband is 6-foot-5,” says Elliot. “I am automatically drawn to tall guys. And he had dark hair. And he was just cute-as in Jim from “The Office” cute, but not dorky like that cute, more like athletic cute.”

Elliot admits she was always hoping to see her crush at athletic events, and her husband figured out pretty quickly she thought the coach was hot stuff. “I’m sure I told my husband that I thought the baseball coach was darling!” she laughs. “Or I probably offered one too many times to take my son to baseball practice and since my husband knows I loathe sports, he figured out my ulterior motives.”

Spice up your life – even your marriage

The thrill of having a crush-and the hope and anticipation of seeing that person-can break you out of what I call a Mom Rut. Like many stay-at-home moms, most days find me makeup-free, wearing jeans and with a messy ponytail. My focus is on my kids, not my looks. But my crush meant that I spent some extra time on me, which made me feel attractive and confident. It meant I spent more time at the gym, too. And it added an extra spark to my marriage, which benefited my husband even if he didn’t know why.

“It’s simple-fantasy is a very important part of life,” says Carle. “If we don’t fantasize we’re missing out on a lot. …Very often people like to fantasize about other partners when they’re in bed. The number one complaint among married couples is boredom, so to alleviate that, you can find somebody to add some spice to your life-not in reality but in make-believe. Little children like to play make-believe but we seem to have forgotten some of the play element that keeps us alive and keeps our heart thumping.”

What not to do

A crush is one thing, acting on it is another. If you’re in a happy relationship, it’s better to indulge your fantasies in your mind than risk “going too far” and hurting your marriage (or, at the least, embarrassing yourself.) “Remember, in real life, following up on a crush usually leads to pain and disappointment,” says Tessina. “Part of what makes a crush so enticing is it involves only your fantasies.

“If you think about it, why you’re attracted and what your longing is about, you might be able to bring more of that into your real-life relationship. For example, if your crush is at the gym, you might want to ask your husband to be your personal trainer and transfer the crush to your partner,” says Tessina. “Or add some role-playing to sex to spice it up.”

Carle says: “Crushes are safe and healthy, and you would expect that. But if the line is crossed, trouble can erupt. Ask yourself one question: ‘Would I be comfortable if my husband was doing the same thing with somebody?'”

To tell or not to tell

So, should you share your crush with your partner? It depends. Elliot’s husband wasn’t threatened at all about her infatuation. “It was a harmless crush and playful, and I think my husband got a kick out of teasing me about it,” says Elliot.

Sharing her crush with her husband turned her infatuation into a shared secret, which strengthened their bond. Not every partner wants to know about the crushes you have, though, which is why it’s usually smarter to giggle over your crush with a girlfriend or keep it to yourself. Think about your husband and how he’d react before you “reveal all.”

My husband knows that I drool over Daniel Craig and Johnny Depp, but he wouldn’t want to hear that I “have the hots,” as my mom would say, for someone I actually know. So I keep my crushes to myself, and only “act” on them with Erik. That’s good news for me and my marriage-and my husband.

There's no better time to visit local museum, park or other attraction than on kids' day!
Read more
Guides