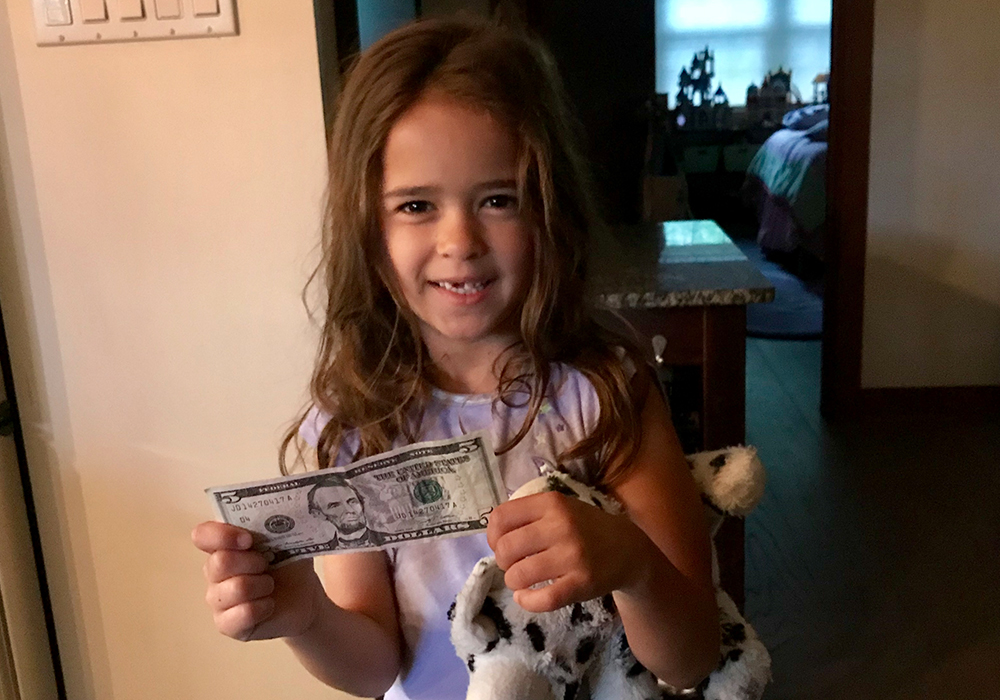 It’s Tooth Fairy time in Viva’s house again. Last year, Professor Foster and I wrestled with how much money the fairy should bring—which is again an issue because now we’re losing eye teeth, which I believe should command more than a novel two-dollar bill or dollar coin or whatever a more quotidian tooth might earn you. I even floated the notion of a Hamilton for an incisor, but one which must be put in the college fund, not in some slush fund where it might be converted from USD to LOL Surprise dolls. I was informed that a twenty would inflate the classroom economy for teeth and that the fairy should pump the break.

More confusing than the financial return on the tooth this year is the ontology and cosmology of the Tooth Fairy herself. Where does she live, how does she work, how did she get into this universe and what is her deal? Fundamental questions about the nature of Tooth Fairy being and existence. Also alarming is the dread and suspicion over whether or not the Fairy exists at all, primarily brought on by precocious classmates with older brothers.

A scene from dinner:

Viva: What does the Tooth Fairy do with the teeth?

Professor Foster: Maybe she eats them?

Viva (horrified): Eats them?! She eats my teeth?!

Me:  No, no, no, no. She probably builds her castle with them.

Viva (scoffing): That’s silly. It would be the size of a state by now.

Professor Foster:  Maybe she makes them into jewelry?

Me (horrified): That’s awfully “Platoon”. I hope that’s not true.

Viva: I think maybe she uses them to fuel her powers.

Me: Ah, sure, that makes sense.

Viva: Or maybe she makes them into puppets.

Viva: She brings them to life to be her assistants. She has three of my teeth now and they are probably friends.

I don’t know that the “puppets” concept is any less upsetting than the eating or the necklace.  I know one thing, though, that every answer to how the Tooth Fairy functions is more horrifying than the last. She does, after all, traffic in discarded human tissue. It makes a rabbit toting hard-boiled eggs seem very sane and tame.

I asked around to find out if the Tooth Fairy exists in other parts of the globe. While much of Russia and China seems to have a Tooth Fairy like we do, it seems that people in parts of Central Asia bury the teeth under a tree, which seems like ineffectual fertilizer, or feeds the teeth to dogs—which seems like a good way to kill your dog. More interesting is the Central and South American concept of “Ratoncito Perez,” a rat that comes and takes the tooth and sometimes drinks a glass of water, like a lactose-intolerant rodent version of Santa Claus. In the Philippines, the tooth collecting bogie is also a rat—because of the association of rats with strong teeth. Viva was uninterested by a visit from the Tooth Rat, partially from an aversion to Bubonic Plague, and also because “a rat can’t carry a purse.” It always comes back to the cash.

In my research on global tooth mythology, I also asked an Italian cousin what the going rate for Tooth Fairy money is in Italy right now, and she said ten Euro. The exchange rate this week makes that about $11.62 USD, which seems oddly specific, so we just went ahead and requested five dollars from the Fairy, as opposed to the European rate, a gold coin from a rat, or killing the dog.

The other front tooth is loose as well… so maybe we’ll call for the rat next week.