Mom’s motto: Down syndrome ‘is what it is’ 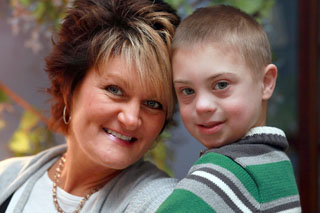 When Nate Simon made his quiet appearance seven years ago, there wasn’t a party in his mom’s hospital room like there had been with his four siblings. Instead, as Holly Simon remembers it, the nurses avoided eye contact and the doctors kept saying they were sorry.

“I didn’t quite know what they were sorry for,” Simon recalls.

Sorry that Nate had Down syndrome? Surrounded by so many unsmiling faces, she could only wonder what the doctors weren’t telling her. Was he going to die?

In those early days, she heard only the bad things about having a child with Down syndrome. She had no idea how deeply she’d fall in love with the boy or how much she and her family would learn from Nate.

Simon, who lives in Chicago’s Beverly neighborhood, still feels a twinge of guilt that tears replaced the celebration of Nate’s November birth. She now celebrates it big every year with a community fundraiser called Holly Days that has sent thousands of dollars to the National Association for Down Syndrome, the first stop on many families’ unfamiliar special needs journey.

Raising Nate has been a family affair. Simon describes how the family functions as a simple machine where everyone works together seamlessly without directions.

Best advice ever received: “Just take one day at a time, one step at a time, even if it is baby steps, but keep on walking. … It works for many different lessons in life.”

The one thing you have learned: “I have learned he always exceeds my expectations on the bar that day, so I keep having to raise it. That teachers and doctors don’t always have the right answers and you as a parent have to believe in yourself that you might know the right direction. My favorite, of course, came from my mother, to accept that it is what it is and it will be what it will be. Just take whatever it is that has been given to you and go forward with it.”

Your hope for Nate’s future: She and her husband, Dan, don’t think about his future too often, she admits. “There’s a whole pocket of hope and excitement and there’s a whole other area of fear,” she says. “Our hopes for him: To be happy, successful, to be accepted, all the answers any parent in the universe would have. But more so, I pray that he is surrounded by people who laugh with him and not at him and that he never knows someone is laughing at him.”