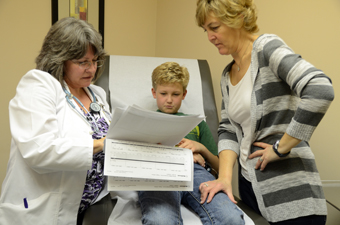 The headlines scream about the obesity crisis facing this nation, with dire warnings about disease and earlier death awaiting today’s children if something isn’t done soon. Fitting hand in glove with the pandemic is a rising crisis right here in Chicago, the surge in the number of children being diagnosed with diabetes.

While Type 2 diabetes, the form of the disease generally caused by overeating and poor lifestyle choices and until recently not seen in children, is setting off the most warnings, cases of Type 1 diabetes, an autoimmune disease, are also on the rise, experts say.

La Rabida, on the city’s south side, put money behind its concern in an effort it hopes will improve the lives of its patients, creating a diabetes center with three doctors, three physicians in training, three nurse practitioners, one advanced practice nurse, one registered nurse, two dieticians, two social workers and a team of psychologists. What all that means is that someone is available 24 hours a day to help parents manage what can at times seem like an overwhelming disease.

In addition to the program at its main location, there are three outreach clinics in St. John, Ind., New Lenox and Hinsdale to make care more accessible to families.

“I really do feel like our patients think that we are part of their team and they are not alone in treating this, and I think that impact is more powerful than anything else. The hardest part about diabetes sometimes is these kids feel quite isolated and the parents feel overwhelmed,” Swamy says.

No one knows better how diabetes can change a lifestyle than Ann Rogers, her family and her 10-year-old son, Matt, who was diagnosed with Type 1 diabetes at just 14 months old.

Rogers remembers feeling a lot of disbelief rushing her baby to the ER.

While it was rough going at first, she says the family found a good network to help, including the doctors and nurses at La Rabida. La Rabida, she says, goes the extra mile and has been “unbelievably supportive.”

The family makes sure Matt has a regular life, which includes competitive swimming.

“You don’t want your son not to be part of something because he has diabetes,” Rogers says.

But Rogers is focused on controlling the disease, checking Matt’s blood sugar levels about 10 times a day. She cheered, along with Dr. Rose Briars, the diabetes center co-director, when she looked over his numbers at a recent appointment at the La Rabida clinic in Hinsdale.

“Our whole goal with diabetes is to keep him healthy, no complications, so when he’s cured, he walks away. Everything we do as a family is for that one goal,” Rogers says.

Swamy knows how she feels. Diabetes has been part of her life since early on; her father died from it when she was 12. She says she hopes better treatments, more medications and a cure happen in her lifetime.

Her goal, she says, is to keep “her kids,” as she calls her patients, from the same problems as her dad.

With the team approach to diabetes care, Swamy says she’s already seeing improvements in patients, with kids taking better care of themselves.

At the same time, La Rabida is reaching into Chicago neighborhoods to educate people on how to eat right and exercise to prevent new cases.

Rogers looks at the increased knowledge about nutrition for her family as a gift. They limit fats, watch for processed foods, eat whole grains and get plenty of exercise.

“We talk to Matt about it. ‘Everybody has something; some kids wear glasses, some kids have wheelchairs, you have diabetes.’ That’s it. He gets that,” Rogers says. “He’s super empathic, a real caretaker.”