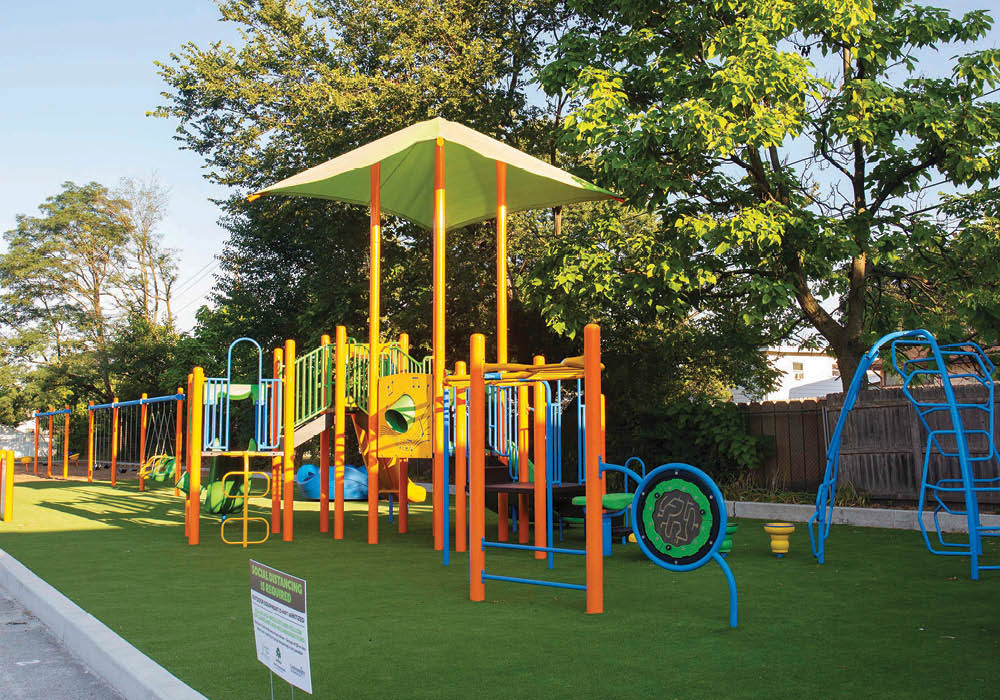 Four years in the making and a rallying point that brought the community together, the new inclusive playgrounds at Lester Elementary School in Downers Grove are already drawing play-seekers from all around the area.

Work started on the Lester Community Playground four years ago when Patty Esslinger raised her hand to volunteer to head up the PTA committee to replace the school’s ancient playgrounds. At the time, all three of her children attended the school and she thought it was a great way to immerse herself in the community.

At first, the plan was simply to replace the traditional existing equipment, but then Esslinger and the committee started to really look at the community and its needs.

“We thought it would be better to build something everyone could use regardless of their ability,” she says, adding no one wanted to force a child to sit on the sidelines to watch others having fun, something she had heard happened too often.

As excited as they were, though, they didn’t anticipate the huge costs involved.

To help, kids held lemonade stands and gave their birthday money to the playground while the community held fundraisers, she says. They raised $425,000.

“It’s a beautiful thing to see a community come together for something so special as a playground. A playground is not just a place where kids just play, it’s really more a place where families come together,” she says. “Now families have the opportunity to bring their child, who might look different, and have them included in the social aspect of a playground and other children will have the ability to ask questions, which I think is what we want in our society. We don’t want children to feel left behind. It brings a level of empathy for all children. It will allow them to grow into adults that have empathy and … just generally good people.”

Her two favorite elements: The disk swings because they reminds her of happy days at a playground with her grandfather and the roller slide.

“I see kids there, they are swinging together, they are laughing, they are happy. It brings me so much joy,” she says.

Downers Grove now has three inclusive playgrounds, with another one in the works.

“Downers Grove is doing a really job trying to promote inclusiveness and trying to ensure every kid has the same opportunity,” she says.

Try one — or all — of these easy breakfast ideas for kids when the school year begins.
Read more
You

If you want to join the fight to help end gun violence, start with these organizations.
Read more
Advice

An expert explains what kids should be taught about safety in large crowds and at public events.
Read more
Guides

Get to know this south suburb full of fun for families.
Read more