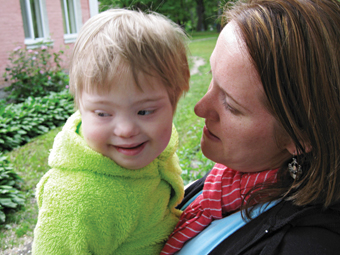 For Gillian Marchenko, sending her daughters off to preschool means more than picking out their outfits. It involves hours of meetings with administrators, teachers and outside therapists. And it means that Marchenko, a mother of four who lives on Chicago’s North Side, has found herself on the front lines of their education.

Two of Marchenko’s three daughters have Down syndrome-Polina, 3, and Evangeline, 4.

Marchenko’s daughters are among the more than 37,000 children between ages 3 and 5 who receive special education services in Illinois. The number of children served statewide has grown since 2004, when about 34,900 students received special education. However, the number of 6- to 21-year-olds receiving services has declined in recent years.

The Illinois State Board of Education attributes the increase to disabilities being identified at younger ages, including in infants, as well as increased cooperation among Head Start, pre-kindergarten and child care programs.

Mandated under the federal Individuals with Disabilities Education Act of 2004, an Individualized Education Program (IEP)provides detailed and personalized curriculum for students with special needs.

Rebecca Benson-Bates’ daughter, Samantha, is one of those children. At 4, Samantha, who has Down syndrome, currently attends preschool. The easy part, Benson-Bates says, was enrolling her daughter in school. After that, she faced piles of paperwork and meetings.

“They ask, ‘what is the goal you want to reach for the child? What achievements in three, six or nine months?'” Benson-Bates says.

These goals form the bones of the education plan, and they’re often referenced during the school year. Samantha’s goals are designed to prepare her for kindergarten.

One of Samantha’s goals, her mother says, was to be able to take off her coat and hang her backpack on a peg every morning. She has achieved that, her mother says, and her future goals include pedaling a tricycle, threading beads on a string and answering questions that use the word “who.”

For Marchenko, this happened when the school wanted Polly, who is nonverbal, to learn a picture system to communicate with teachers. However, Polly already knew more than 90 signs in American Sign Language. Marchenko didn’t want to confuse her by switching to a new system.

“They were telling me this is the way we do it, regardless of how your child is, because that’s the way it’s always been set up,” she says. Marchenko pushed back, and the goals were eventually rewritten.

The possibility of major disagreement is one reason Marchenko always brings someone to support her to school meetings, whether it’s her husband or the girls’ therapist.

Still, she stays positive and focuses on cooperation.

She says parents sometimes want to set goals for their children that are not realistic for their current abilities.

“There’s a lot of things in between the dream of a child, the reality of the child and the potential of the child,” she says. “I think all parents and schools operate somewhere in those three things.”

Brought to you by British International School of Chicago, South Loop
Read more
At Home