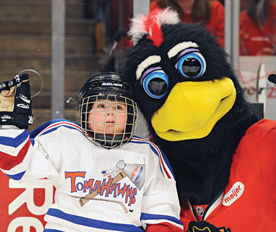 With the Blackhawks fresh off their run for the Stanley Cup, hockey is hotter than ever in Chicago. And the Blackhawks-sponsored Tomahawks league offers people with special needs a place to learn. 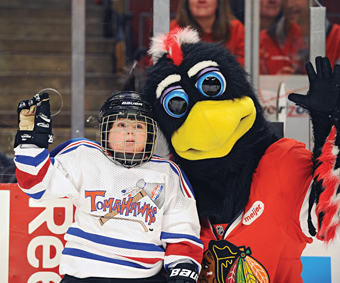 JP Bordeleau, one of the coaches for the Tomahawks, says he regularly hears parents saying their kids can’t play hockey. “They’re like, ‘Well, he has Down syndrome.’ And I’m like, ‘So? I know 50 Down syndrome kids who are playing hockey,'” says Bordeleau. “I’ll tell them about the Tomahawks program and they’ll come out, and you’ll watch them; their jaws are on the floor.”

Anne Maddock feels that shock when she sees her daughter, Francesca, skating up and down the rink. “When my family comes to the United Center to watch every year, (they) can’t get over the difference,” she says. Before she started, Francesca couldn’t even skate. “I think that helps build confidence, to try something that you’re not even familiar with and realize that you can do it and really make good friends out of it,” says Maddock.

The coaches break the players up by skill, allowing all levels to get on the ice and give it their best shot.

In keeping with the Tomahawks’ goal of including everyone, costs for the league are kept low. The league even covers the costs for families if they can’t afford the fees like it did for Casey Faust’s son Cameron. There’s also donated equipment for families who can’t buy new gear every year.