Charity puts kids on the go 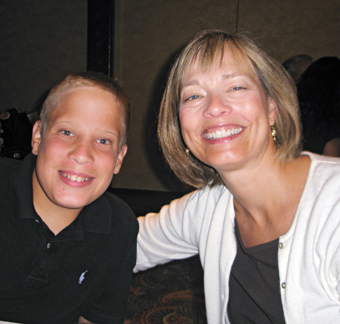 When Blake Harmet was born, his mom worried he wouldn’t be able to play like all the other little boys.

Blake Harmet with his mom, Lisa.

“We decided early on that Blake would participate and do as much as he could, like any other kid,” his mom, Lisa, says. Blake apparently decided the same thing. He has been playing basketball since he was 6, plus tennis and softball. This year, the Warriors, an adaptive basketball team he plays on, took the state championship, thanks in no small part to Variety Children’s Charity’s donation of two sports wheelchairs to the team.

Variety’s Kids on the Go program also donated Blake’s wheelchair, which is made specifically for basketball. “I’ve seen pictures of me playing before I got the chair and it’s not pretty,” says Blake, 14. He started playing in an everyday wheelchair not meant to be used on the court.

The Kids on the Go program offers equipment to children with physical disabilities to improve their mobility-be it adaptable sports equipment or running boards for the family car.

“To date, we can honestly say we have not turned anyone down, which we’re very proud to say,” says Michelle Baert, the president of the Illinois chapter of Variety. For her, the program aims to provide “anything that would make a child’s life a little easier.”

The Illinois chapter has provided 21 pieces of equipment to date, as well as two large grants to Chicago schools to improve their equipment for children with disabilities.

For the Harmets, the program made a world of difference. “It’s really a dream come true because it was our biggest fear that he wouldn’t be able to do the things that most little boys want to do,” Lisa Harmet says.

“He’s gained such confidence in himself,” she says.

All it took was some easy paperwork and six months later Blake had the sports chair. “He loves it so much now, I can’t imagine him without it.”

After watching this sequel, try these activities with your family including a talent show, baked treats and dance party.
Read more
Guides

Try these activities with your children at home or in your neighborhood before schools starts back up.
Read more