50 years and counting for one Chicago area Special Olympian 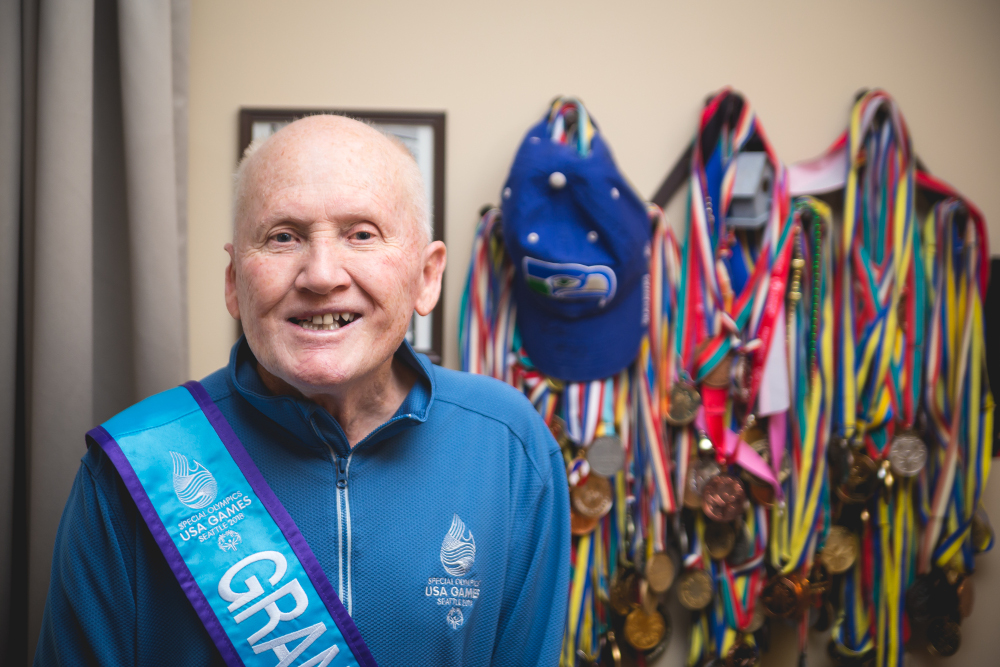 On a wall in Tim Corrigan’s bedroom, a rack struggles to hold many of his 200-plus Special Olympics medals won over the past 50 years.

“I have more of them somewhere,” says Corrigan, proudly wearing one of his prized Special Olympics T-shirts.

The 75-year-old multi-sport athlete competed in the first Special Olympics competition on July 20, 1968, at Soldier Field in Chicago.

“I did track and field. I used to run pretty fast,” Corrigan says without a hint of hyperbole. “But not so fast anymore. So now I play golf and bocce ball.”

Corrigan was 25 when he first competed as a Special Olympian.

“Back then, we didn’t know it would turn into something so wonderful for him, and for our family,” says his youngest sister, Susan Forman. “The games have brought a lot of joy into Tim’s life, and into our lives. It has given Tim confidence and happiness.”

For the past 17 years, Corrigan has lived with Forman and her husband, Pat, in their Oak Forest home. His bedroom reflects his passions like a mirror. A puzzle in progress waits for him in front of a TV set where he religiously watches every old western show and every new Chicago Cubs game. In his younger days, he would pitch pretend baseballs in sync with the Cubs pitchers. He lives and dies with each game.

“If the score of the Cubs game is too close for comfort, Tim can’t bear to look at the TV,” Pat Forman jokes. “Isn’t that right, Tim?”

Corrigan replied with the sheepish smile of a young boy.

He was born March 16, 1943, the oldest of four children to Fran and Beverly Corrigan. As a boy he had a big smile and even bigger eyes. His mother defended him, protected him, nurtured him and motivated him. He learned how to square dance, love Elvis Presley and play most every sport, from softball to floor hockey.

Corrigan later got a job as a groundskeeper with the Chicago Park District, maintaining ice rinks and even Soldier Field. He retired from the job in 2000. But not from Special Olympics, his true love in life.

He has attended Special Olympics Games across the country, and served as an ambassador at the International Games in Ireland. In 1993, he participated in the organization’s 25th anniversary games.

“Tim was lucky enough to light the Olympic flame that year,” says his sister Mary Ellen Longawa, of Alsip.

In his home, Corrigan’s family shared a table full of photos from all his Special Olympics achievements, including one from the 1970s with former Chicago Mayor Richard J. Daley, and another from 1988 on the 20-year anniversary of the organization.

Nearly 20 years ago, Corrigan stumbled onto a bowling league hosted by the South Suburban Special Recreation Association. He’s been a member ever since, participating in bowling, volleyball and bocce ball, among other sports. Most recently, he’s been playing unified golf, where he and a friend or family member play side by side on the course for a combined score.

“Tim is a great guy, a wonderful spirit and a positive competitor,” says Tammy McMahon, program manager for SSSRA. “He is always greeting other athletes, shaking hands and asking if they are ready. Tim is looked up to by the younger athletes starting in Special Olympics.”

When they find out that Corrigan competed in the first Special Olympics in 1968, they ask to take a photo with him.

“He has become a local celebrity in our region,” McMahon says.

Just as Corrigan began to show off his beloved golf clubs in his home, his youngest sister leaned in for a hug. He gently leaned into her.

“Tim has taught us so much in his life,” Forman say, her voice cracking with emotion. “Patience, loyalty, dedication and a loving spirit. He loves his nieces, nephews, great nieces and nephews. He attends all of their sporting and school events.”

In another corner of his bedroom, a golf putter rests next to a walking cane.

“I still use one a lot more than I use the other,” he says with a chuckle.

Special Olympics now and then

In 1968, Illinois Supreme Court Justice Anne Burke was a 23-year-old physical instructor at West Pullman Park on the southeast side. She came up with the then-extraordinary idea of gathering children with disabilities and helping them compete in a track meet and other sports.

“For 50 years we have been breaking down barriers and creating solutions for real problems that people with intellectual disabilities face in the areas of isolation, inactivity and injustice,” says Special Olympics Chairman Timothy Shriver.

“We need to accelerate this work in our next 50 years, but also demonstrate how our athletes, people with intellectual disabilities, are teachers of empathy and inclusion. We know firsthand how the Special Olympics experience—and our athletes—bring people together in ways that erase the lines of division.”

“Many people ask, ‘When are the Special Olympics?’ but we put on 201 competitions in 17 Olympic-type sports throughout the year,” says Alexandra McMillin, spokeswoman for Special Olympics Illinois.