Simple ways to take your home from chaos to calm 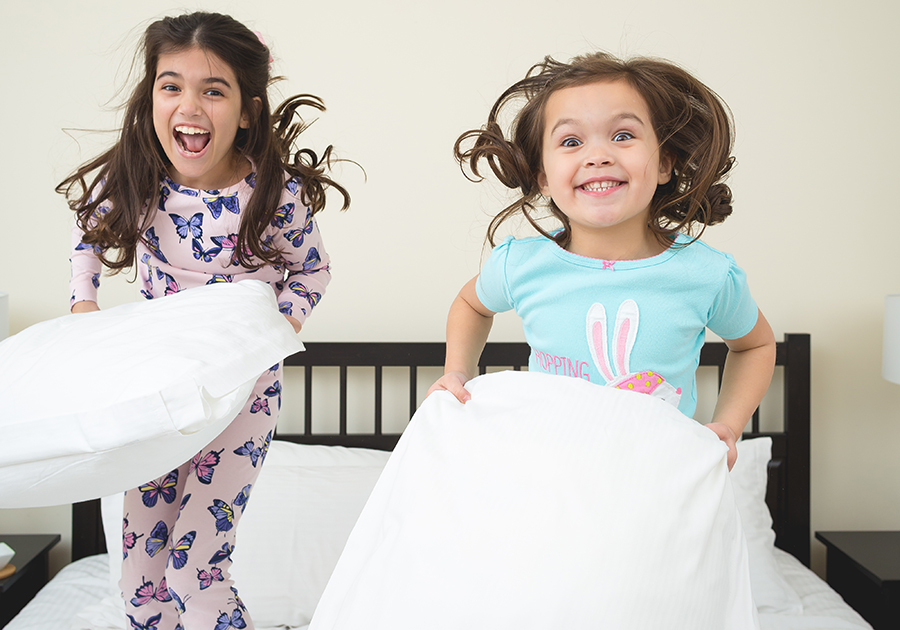 It’s Sunday night and lunches aren’t made. The baby is still awake and the other two are fighting at the top of their lungs. Not to mention the piles of laundry and dishes just waiting to be done. It can be easy to look around at the chaos and feel lost about what to tackle first.

“There’s a certain chaos that is just endemic to raising kids,” she says. In a world of perfect looking posts on social media it can be easy to forget that fact, but it’s true. While there’s no perfect solution to eliminate the chaos from your house, there are steps you can take to ease the pandemonium and bring a sense of calm to your family life.

Waking up, eating breakfast, prepping lunches and getting out the door on time can be a frenzied affair.

Hirt says parents should take as much advantage of the night before as possible, check the schedule, prep meals and discuss the next day’s events before bedtime to have a smoother morning transition.

She calls it the “5, 2, 1” method, meaning five minutes before it’s time to clear the table, she’ll give them a warning that the transition is coming, then again at two minutes, and one minute. This method can be employed at any point through the day to keep kids on schedule and let them know what to expect. “There’s a massive difference between a calm and gentle 5, 2, 1 reminder and yelling that they are late for school and it’s time to go,” Heidelberger says.

Asking kids to clear the table or make their beds can be another pain point, but Hirt says it’s important to remember why you asking them to do those chores. She calls it intentional parenting.

She also recommends clarity and consistency when it comes to outlining the rules.

“It should be written out, simple and consistent. If the kids are old enough, engage them in the process of coming up with those rules,” she says. And if you ask them to make the bed and aren’t happy with how it looks, don’t go back and redo it—you’re just creating more work for yourself and undercutting their independence in completing a task.

Kids today are busier than ever with school and activities, making it hard for parents to stay on schedule and stay calm at the same time.

While experts say family meetings, large white board calendars and phone reminders can help, the easiest way to alleviate this stressor is to just be less busy.

“Everyone thinks we should be doing this or that, what children really need is to be with their family in a calm environment, which is typically at home,” Heidelberger says. “Parents over-commit and their home is filled with chaos and screaming to hurry up and get to the next activity all while life is racing past.”

Hirt says parents should be intentional about what activities they sign their kids up for and when to say no. Don’t be swayed by FOMO (Fear of Missing Out) just because friends or neighbors are doing something.

“At the end of the day if you know what your goals are in terms of how you want your house to feel and what you want for your children, that can help you not be seduced by the latest trend and activity,” Hirt says.

Getting kids to sleep, at any age, can be one of the most difficult tasks parents have. But, banging on the door and yelling at them to go to sleep doesn’t necessarily provide a calm sleeping environment for your kids.

“Children—and adults—thrive on schedule. Kids should have the exact same bedtime every single day. It’s hard to do, but there’s so much benefit to it,” she says.

She encourages parents to look at the value of having a calm, rested, happier child over the experience of staying up late as a special treat.

When you left the room, your kids were playing like angels. You return to find the two screaming over who knows what and racing to tell you who pushed who first.

It can easy to lose your cool, but Heidelberger says those moment are all about tone. Just because they’re yelling, doesn’t mean you have to yell, too. Try a quieter tone, it may distract their attention from the fight as they try to hear what you says, she suggests.

If one sibling is picking on another or speaking in a disrespectful way, that should be nipped in the bud with a short, calm, forceful reminder of the rules.

“It’s not always about being heard. We are still the parents in the house and sometimes the rule is the rule and the conversation is over,” Hirt says.

As parents it can be natural to mirror your child’s emotions. When they are excited and happy about something, you feel happy, too. But, Hirt says when those emotions are negative, like a meltdown or tantrum, parents need to refrain from mirroring what they see.

“Kids can’t self-regulate their emotions. Everything is the end of the world,” Hirt says. It’s also an option not to engage.

Both Hirt and Heidelberger say parents should feel comfortable walking away from a fight if they don’t feel ready to respond calmly.

Heidelberger calls it parents giving themselves a time-out. Say your kid spills a bag of flour or breaks your favorite vase. It’s OK to walk away.

“Parents need to pause and correct themselves before they go crazy. Put yourself in a time-out and come back when you can come back and be a calming force with the child,” she says. And don’t forget to tag in your spouse when you need a break.

If you do react poorly in the moment, Hirt says it’s never too late to change your response. “Sometimes we make the wrong call and we need to own that. We’re all human and have emotional responses,” Hirt says. “We’re going to have bad days, we’re going to scream at our kids when we don’t want to. But then we have to go back and own what we did and in doing so you model for your kids how to apologize and recognize their own behavior.”

Consistency, organization, clarity about expectations and lots and lots of deep breaths. Experts say that with those things, you can help transform your home into a more soothing place, which is better for both you and the kids.

“In a calm home everyone has their chance to bond, communicate, share and laugh,” Heidelberger says. “Versus in a chaotic home where everyone is fighting for attention, they are overtired and no one feels heard and respected. Think about which kind of home you want to live in, which kind of home you want your family to grow in, and that can help guide the most difficult parenting moments to a calmer place.”