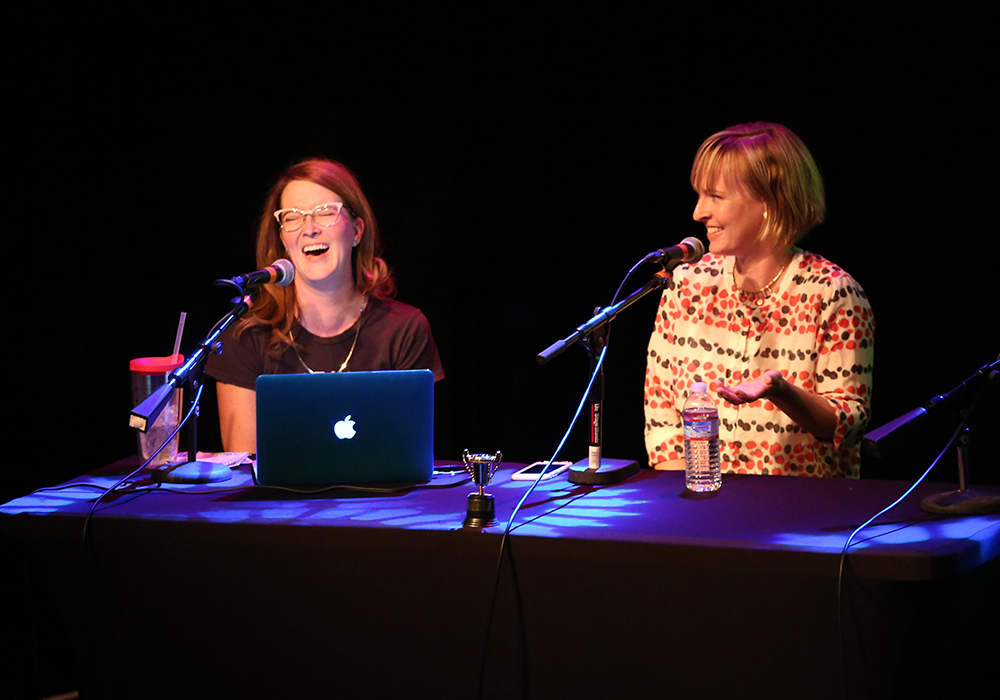 We’ve all had that moment (or two) of self-defeat, calling ourselves truly bad mothers, right? Biz Ellis and Theresa Thorn, hosts of the hilarious podcast One Bad Mother, want to change the lens through which we view motherhood—and reclaim the word “bad” for the 80s-esque badge of honor that it is. I spoke (and laughed through every fifth word) with Biz and Theresa about their upcoming live show at Chicago’s Gman Tavern, how to make the internet a kinder place and dream podcast guests. (Tina Fey, anyone?)

The One Bad Mother online community is deemed “the nicest place on the internet,” something you don’t hear too much these days. How did you do that?

Biz: That’s a good question! The first thing is that we have some amazing moderators.

Theresa: We set the tone and then we walked away from it. It really is now a completely listener-run community. And not only is it the One Bad Mother community, but I think we’re somewhere around 200 subgroups at this stage— local community groups, special interest groups, you name it. There’s One Bad Arizona, One Bad Rainbow for LGBTQ, One Bad Homeschooling, One Bad Cooking—like, what’s cooking for dinner? That one pops up on my feed every once in a while. It really goes all over the place! [Our moderators] are clear on what the guidelines are. The main one—which comes from the show—is judge less and laugh more. And remember that people aren’t doing things at you…because things can spiral out of control really fast if someone misconstrues something or someone’s having a bad moment. If you’re really reading everything generously and see everything with a generous heart…you can still share how it affected you in a nice way, and ask for clarification—our moderators really get all of that.

Is there any one type of comment or question that pops up over and over again?

T: Relationships with co-parenting partners…and with their in-laws and friends.

B: We had this guest on once who had this great comment about parenting and was like—we don’t always remember to talk about things before we have kids, how we might handle different things…so a lot of times you have kids and you’re suddenly in a situation where you’re figuring out how you and your village are going to do this. And that’s a lot, on top of your whole identity changing—it always goes back to the whole “don’t assume somebody’s a jerk.” One of our favorite lines is “I didn’t marry an a**hole- even though it can feel like it at times- and he didn’t either.” I think struggling through how we become better communicators with the people in our lives and with ourselves…that one probably comes up the most, second only to, you know, “sleep.”

I like the crux of what you aim to cheer on with parents—this idea of celebrating what did (not what didn’t) happen. Do you have any recent examples of that in your own life?

T: Yeah, I think I’ve gotten good at that. I don’t keep a to-do list anymore, I just work with what’s in front of me—I think it’s been really healthy for me.

B:  Yeah, not spending any time on the things I didn’t do…or the fails…there are so many and we talk about them so much they don’t carry the weight they once carried. “Yeah—I totally screwed that up. That’s all right.”

There’s almost a zen-like quality about that.

B: Yes! Talk it to death! Talk the power right out of it.

My husband might say I do that anyway. Your One Bad Mother podcast is now in its fifth year with almost 250 episodes— do you have any favorite moments from past podcasts?

B: We were doing a show on crafting…I turned to Theresa and said, “Let’s talk about crafts and what that means to parents.” And I’m a fixer, I like to make stuff, and I start down the discussion path with Theresa with all of this excitement and joy—and she starts crying. Suddenly the episode went real serious, like “I don’t like crafting, it makes me feel a totally different way than you.” We were about two years in and it was such a reminder that none of us are doing this the same way and what might be normal for you isn’t normal for anyone else. It reminded me how much I really like Theresa, even though we don’t like the same things or parent the same way and it just symbolized so much of what people put importance on with parenting.

T (to Biz): I hope this is okay that this is one of my favorites—When Biz and I first came back from maternity leave about four and a half years ago, we were both in the booth holding newborn babies. We were both dealing with things but Biz was really dealing with the reality of that time in her life [on the air], and that show really resonated with a lot of our listeners. There was such a genuine moment that we don’t generally get to hear depicted publicly.

I think we’ve all been there, holding the newborn, having the moment…

B: I think that’s what really important is that we all have. We don’t share that enough and it can leave people feeling like they’re doing it wrong. And they aren’t.

Do you have any dream guests for future episodes?

T: I probably don’t need to say Tina Fey…that’s a given.

B: Yeah…and I’d still totally love to talk to Hillary Clinton, and be like—yeah, let’s talk it out.

Now tell me about your Chicago show!

B: We’re super excited! We booked one show and it sold out in two weeks—and we didn’t know what was happening! We were like, Hey Chicago, all right! So we booked a second show. Our live shows are really fun, we like to bring a guest on to help us hash it out—it’s always fun to have another voice. We do live “genius and fails” and our audience actually gets to come up and share. We give out little trophies that say they’e doing a great job—or that they suck…

T: It’s really one of the best parts of the live shows.

B: You have this whole crowd there to cheer on your genius moments, or really support you through your fail, which is amazing. And what we usually do is feature a rant, a mom who has had a breakdown—we have a hotline that people can call and we’re averaging around 300 calls a month. People just have us on speed dial and need to let it out, and we’ll play one at the live shows, and we all get to sit there together and go through this moment with this caller. It’s a really awesome opportunity to get to be face-to-face with the community and really be able to say what a good job everybody’s doing. Volumes Bookcafe will be selling copies of “You’re winning at parenting”—which is pretty much the show in a book—before and after the shows both nights. We’ll be doing a signing as well. And after the show we hang out with everybody, which is always a big, fun, party time. We have fun!

One Bad Mother: A Comedy Podcast hosted by Biz Ellis and Theresa Thorn

How Community Response Teams Are Helping Neighbors Support Each Other

Help out in your own neighborhood with these tips.
Read more
Guides

Why Summer Is the Right Time for Tutoring