My Daughter, the Mermaid 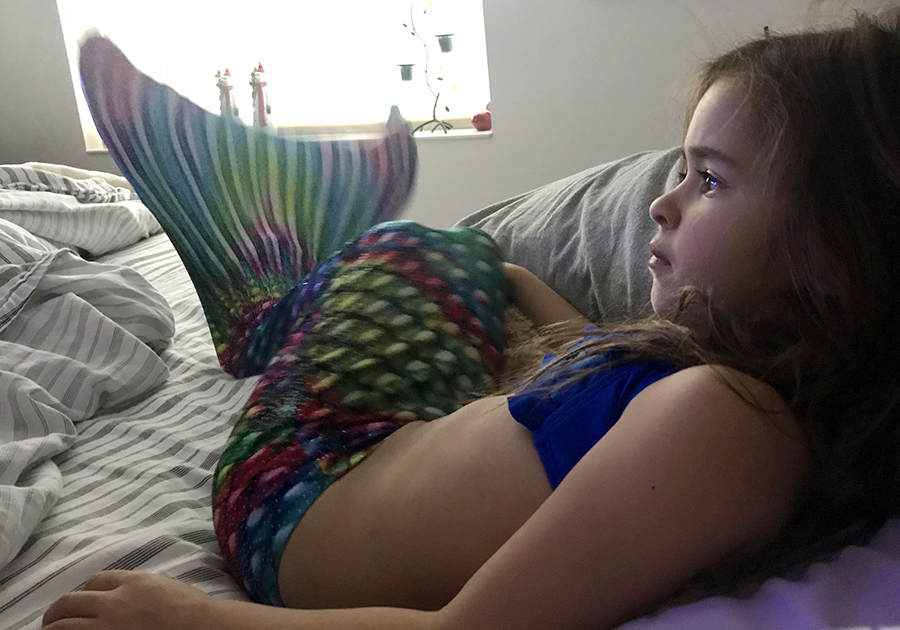 This week’s blog post is by The Paternity Test co-host Matt Boresi, who lives in the Edgewater Glen neighborhood of Chicago with his wife (“Professor Foster”) and their 6-year-old daughter Viva, who thinks life under the sea is better than anything they’ve got up there.

So, my daughter is a mermaid now. I’d say it’s a phase, but you can’t really know if something is a phase until it ends. It’s possible that in twenty years she’ll be in a travelling sideshow sitting in a water tank, or swimming in a show at Las Vegas hotel. The latter sounds better than the former; it might be twelve shows a week but I’ll bet there’s benefits, a per diem and all the mackerel you can eat.

What’s really happening here is that she asked for a mermaid tail for Christmas, and my parents obliged. It’s a hell of a mermaid suit, too, with a real fin inside and an iridescent sheath over it, plus a ruffle-y top. I’m not excited to bring her to an actual pool with her legs tied together (she can’t actually breath underwater, to the best of my knowledge), but it is a beautiful costume … and one she doesn’t take off.

What’s the appeal of mermaids? Feminist theory has a ton to say about it; how mermaids are either the literal man-eating sirens of myth or the helpless victims of Hans Christian Anderson’s version of Ariel, who gets turned to foam for love. Thing is, my daughter Viva doesn’t know either of those stories. I don’t even know that she’s seen Disney’s “Little Mermaid” all the way though because of the scary octopus lady who turns lovers into little worm things. (Have you ever noticed they don’t get turned back in the end? Their spirits go off to Mermaid Valhalla or something, but they don’t get a second act in life. Love: it turns you into foam or a worm thing.)  Viva doesn’t know mermaids eat adventurers or get victimized into foam. What does she know?  They have pretty hair and a shiny tail and sing well. I guess that’s appeal enough for Viva. Feminist theory likely wouldn’t be crazy about that, either.

But it’s not just Viva. Mermaids are big business, and there are about four mermaid movies about to open, including a live-action Disney with some Lin Manuel Miranda involvement (expect rapping crabs) and a Sophia Coppola joint. (Expect style over substance.) I guess it’s not just wayward sailors who can’t resist the mermaids allure.

There’s mermaid food now, too. Like that unicorn food from last year only … well exactly the same as that. I guess the mermaid food leans more aquamarine in color, where the unicorn foods lean more fuschia. I’d guess there’s a really gross latte in your future this spring. For now try the toast.

We have some ground rules for Viva’s mermaid routine. Mostly just that she can’t wear it to school. She’s in public school, so I guess they’d have to educate a mermaid child along with everyone else, (Betsy DeVos is against it, of course.) but her classroom is already crowded so it seems cruel to the teacher to demand she differentiate for a girl who won’t stop splashing in her water tank and luring sailors to their doom. We looked into a school full of mermaids, fauns and satyrs, but it was Montessori and we couldn’t afford it.

There are some downsides to having a mermaid for a daughter. The first: they can’t do stairs. There’s a LOT more carrying involved, and Viva’s little but I’m kind of an old dad, so at some point I’m going to blow out a shoulder lugging around my half-fish kid. Second: they want to be in the water all the time but also want to watch mermaid videos on YouTube all the time, and if you drop the iPad in the Whirlpool it’s pretty much ruined.

An upshot? Even though Viva’s taste palate has shrunk to the point that butter on white bread is too spicy for her, she ate an entire carton of Trader Joe’s seaweed snacks last night because she thought it seemed like mermaid food. I like seaweed around my sushi, but those dried snacks make you burp up a bait shop all day. Still, if she’ll eat something, I’m all for it.

So, we’ve facilitated her love of mermaids. She gets in her costume and plays with her whole pile of Barbie and Sophia and other mermaids. My wife decided #mermaidssowhite and even bought a discontinued Barbie mermaid with brown skin at a premium to keep the school of mermaids (Pod of mermaids? Murder of mermaids?) diverse. It’s a much better look.

How long will this go on? I’m not sure, but hopefully she’ll be over it before she’s too heavy to carry or before restaurants get angry when we ask for the non-air-breathing section. Mermaids are pretty cool, I guess, and I’m always up for a Menken tune.

Now, if you’ll forgive me, I have to go spread aqua cream cheese on brioche and sprinkle it with smelt. The mermaid calls.