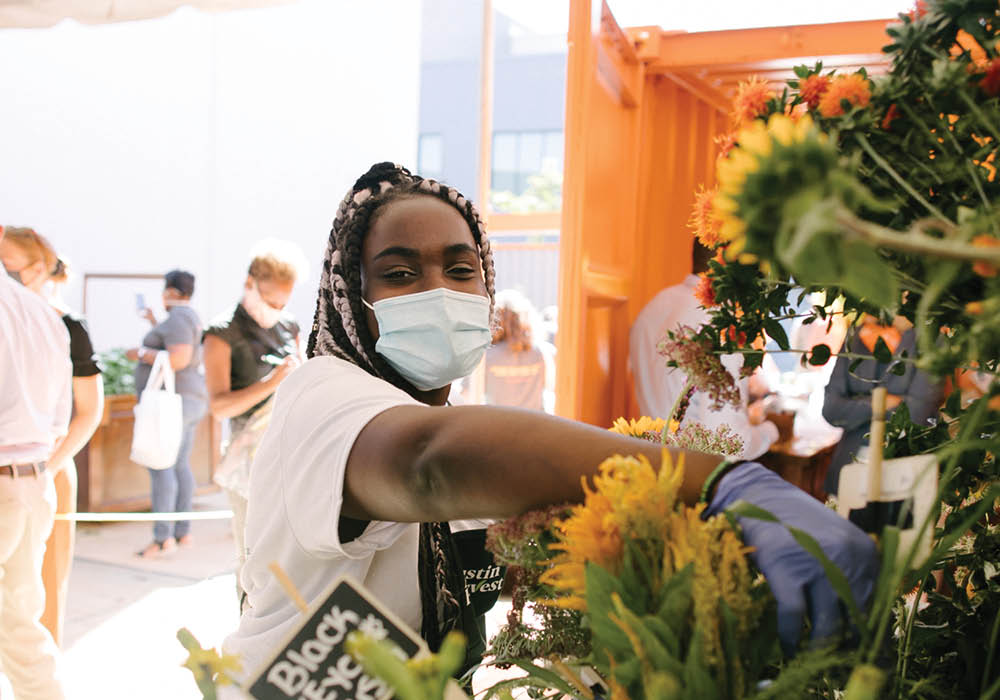 Following the death of George Floyd, several Austin-area teens from By The Hand Club (an after-school program in the neighborhood), began wondering how they could pave the way for community change.

After gathering in healing circles with local police and athletes, an idea was born – transform a looted liquor store in the neighborhood into a fresh market.

Austin is considered to be a food desert. While there is only one grocery store within a half a mile radius of the store, there are, by contrast, more than 17 liquor stores. Studies have shown that closing liquor stores and replacing them with safe and vibrant outdoor space is proven to prevent violence.

In early August, Austin Harvest opened its doors, thanks in part to funding by former Chicago Bears linebacker Sam Acho. The pop up is a youth-led open air fresh-market that provides fresh produce and flowers to the residents of the Austin neighborhood in the far west side of Chicago

“As systematic racism was unfolding in the community and in Chicago, everyone was left with a choice in how they responded,” said Rodney Williams, director of entrepreneurship and economic development at By The Hand Club.  “Some people chose to tear down and loot. I am proud to say I work with a group that chose to build instead.”

Williams supervises the youth who founded the market through a 12-week entrepreneurship program where they are learning everything about starting a business, from architectural design to customer service.

Azariah Baker is of the founding members of Austin Harvest. The 15-year-old high school sophomore has spent all summer preparing for and working at Austin Harvest. In the Fall, she plans to work around her school schedule.

“What I am doing right now is far more important than anything I could ever learn from school or a textbook,” Baker says. “I now have the tools to write a future for myself.”

Baker’s “work days” this summer consisted of helping to develop a mission statement, locking in partnerships with community organizations and designing a uniform.

“We are fighting social injustice while at the same time, building community connections,” she says. “While the news portrayed violence in Austin, we changed the narrative. We get to show the world what we aspire to be in Austin.”

Austin Harvest has received an outpouring of support from the community, averaging at least 50 customers a day. The market is cashless – they accept credit, debit and EBT cards.

Austin Harvest plans to remain open through the end of October. They are hopeful that by next summer, they will have a brick and mortar store. The market is located at 413 N. Laramie, Chicago. For hours and information, follow @bythehandclub on Instagram.