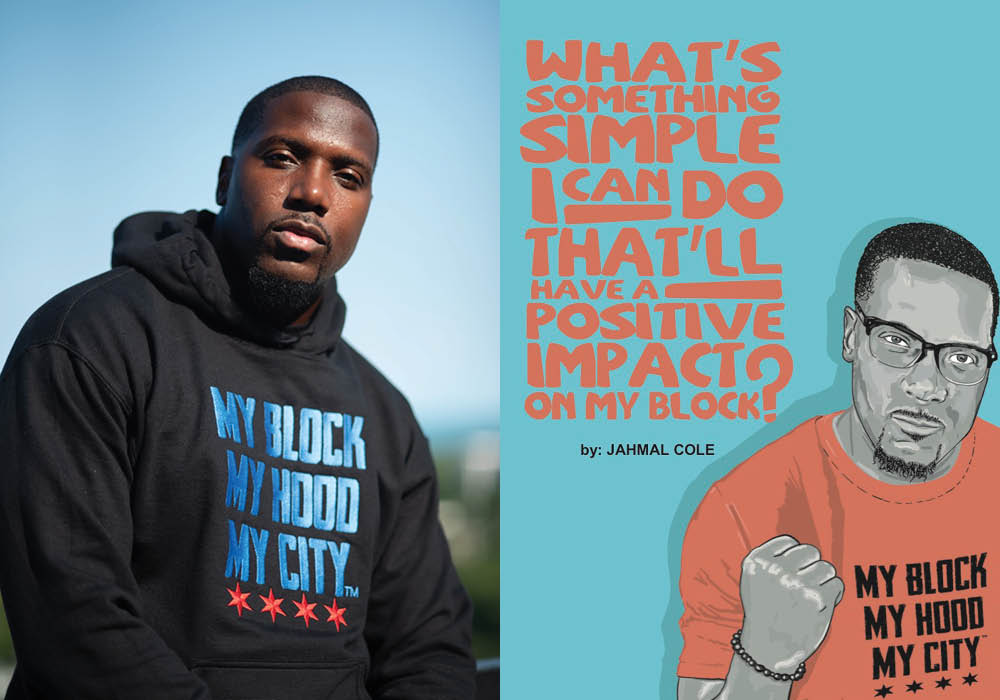 When Jahmal Cole was 4 years old, he remembers a speech he gave at his preschool graduation. He said, “We, the class of 1988, are determined to be our best whatever we say or do. We will share our smiles and lend a hand to our neighbors no matter what.”

That speech has defined the way he has lived his life.

More than 30 years later, Cole, a social justice champion with a tattoo across his chest that reads “give until you can’t give no more” is the founder of the nonprofit My Block, My Hood, My City, Chicago’s fastest growing social impact organization. He recently published a book that explores the power of building community and helping your neighbors.

“What’s Something Simple I Can Do That’ll Have a Positive Impact on my Block?”, released in November, provides a template for those inspired to do something but are unsure of where to start, along with testimonials from people who took that first step themselves.

As an international speaker, Cole, the father of two daughters ages 10 and 2, wrote the book (his seventh) after hearing that he inspired regular people to make a difference in their communities.

“One person told me he went to the skate park, took a garbage bag and cleaned up all of the beer bottles,” Cole says. “Another person said she painted art on all of the garages in the alley to inspire people. Someone else planted sunflowers in the hood.”

My Block, My Hood, My City, founded in 2012, doesn’t have a formal business plan or programs. Instead, Cole says, they “take care of people no matter what” as needs arise. During the onset of COVID-19, they shipped and delivered food, water and hand sanitizer to senior citizens, connected them with physicians and helped with contact tracing. In just one day, the organization raised more than $1 million for small businesses impacted by the looting in Chicago.

“We are like Nike of community organizations,” says Cole, who is inspired every day by his purpose driven life to help others.

Cole says you don’t have to have an elaborate plan or fancy degree to make positive change and bring people together.

Originally from Waukegan, Cole had a difficult upbringing, having moved to Texas and Wisconsin, facing homelessness and poverty with the constant worry of where his next meal would come from. Cole said his difficult childhood paved the roadmap for his future.

“I didn’t judge people for their situations,” says Cole, who remembers being embarrassed, but holding his head up high when standing in line for food at homeless shelters.

When it comes to talking to kids about social justice, particularly in the midst of the Black Lives Matter movement, Cole suggests that parents model the behavior they want to see in their children.

“Parents should find out what’s going on in the world, and then take the kids with them to do it,” Cole says. “Then, people begin to connect based on their values as opposed to their colors.”

“It’s never too early to have these conversations with kids,” says Cole. “It’s going to be uncomfortable sometimes, but we’ve all got to be vulnerable and willing to put the work in to ultimately make the world a better place.”