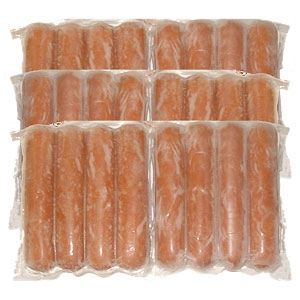 The country’s leading group of pediatricians is calling for sweeping changes to the way food is designed and labeled to minimize the risk of kids choking.

Though toys receive most attention and federal regulation, food is an underreported and unregulated danger, says Dr. Gary Smith, the lead author of the recommendations released Monday by the American Academy of Pediatrics.

WHAT YOU SHOULD KNOW

Don’t give your child round, firm foods (like hot dogs and carrot sticks) unless they are chopped completely. Cut or break food into bite-size pieces (no larger than ½ inch) and encourage your child to chew thoroughly.

Don’t give peanuts to children until age 7 or older.

Supervise mealtime for young children. Teach them to chew and swallow before talking or laughing.

“We really feel like it’s time now to take what we’ve learned from toys and apply that to food, which poses the same, if not more of a choking risk to small children,” says Smith, the director of the Center for Injury Research and Policy at Nationwide Children’s Hospital in Columbus, Ohio.

More than 100 kids die each year from choking-related incident, andthousands more are treated in emergency rooms.

Kids’ airways are narrower than those of adults — easily plugged by a piece of gum or a bite of hot dog — and their chew-and-swallow mechanism isn’t fully developed. So doctors recommend most foods should be cut up into pea-sized pieces before being given to children. And some foods, like gum, hard candy and peanuts, shouldn’t be given to kids at all.

The academy is calling on the federal government to require warning labels on certain foods similar to those found on toys with small parts and, in some cases, to recall certain foods if there is a clear choking risk.

But the most ambitious recommendation is a message to the food industry: Make safer food.

He pointed to the lollipop to show that simple changes that can make foods safer. Instead of a round candy on a hard stick, which can jam a child’s throat, so-called “safety pops” are flat suckers on the end of a soft looped handle.

“Safety sells in this country, and parents are very quick to recognize a safer product,” he says. “I’m waiting for the first company to figure out a way to redesign a hot dog and market it as a ‘safe dog.'”

“Hot dogs on a bun are iconic,” she says. “Changing the shape really changes the personality of it.”

But she notes that more than half of all hot dogs sold to consumers already voluntarily have warning labels on the packaging and that the council has supported previous safety campaigns to educate parents. The council has a message on its web site, and Riley said it plans to produce a short YouTube video reminding parents about hot dog safety.

“We take (the recommendations) seriously,” she says. “We’ll make it a little higher profile given the concerns they’ve raised.”