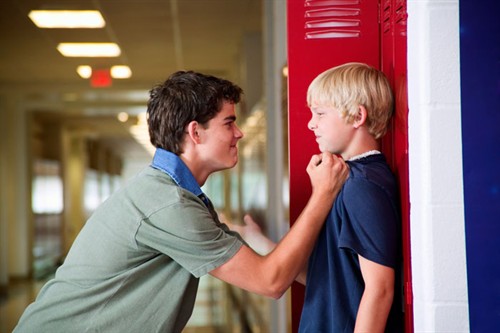 As a parent or educator these days, watching news reports can be harrowing. Physical violence caught on tape, the implications of unedited interactions on social networking sites and stories of harassed victims lashing out are all too common.

The good news is this: Chicago educators take bullying behavior seriously, by adopting zero-tolerance policies and putting proactive measures in place to ensure that kids learn empathy and appropriate behavior at as early an age as possible. By shedding light on this type of behavior, educators are gaining ground on the age-old problem.

Bullying is nothing new and spans all ages of development. That’s why, according to Pope John XXIII School Principal, Rosalie Musiala, this type of behavior is addressed at all levels, preschool through 8th grade. “We focus on bullying and bullying prevention right from the beginning,” says Musiala. In preschool, there are signs in each room saying “You can’t say “You can’t play.””

Teaching children acceptance of others lays the groundwork for empathy and lessens the likelihood of social bullying down the line.

“Behavior is still easily modified with preschoolers,” says Rogers, who notes that kids love the notion of having a “Lakefront family.”

“This idea really speaks to kids and they jump on board,” says Rogers. “By exhibiting inappropriate behavior, a child sets himself apart. None of the kids want anyone to upset the good homey feeling here.”

Involving all kids is key. At Pope John XXIII the bullying discussion continues into the primary and middle school years. “Instead of ignoring it, we focus on it,” says Musiala. “When they learn empathy, they’re less likely to hurt other people.”

Because of classroom activities and discussions, students can easily identify the roles of bully, victim, bystander and ally. Getting kids to integrate this knowledge into their behavior is very important. “We talk about not enabling a bully, calling it what it is, and discuss what we’ll do in the future,” Musiala says.

Most schools have official policies in place to deal with this type of behavior, although the terminology varies. At Council Oak Montessori, focus is placed on appropriate group manners and coping skills of the students, ages 3 through 14. Any inappropriate behavior, such as bullying, falls under the general umbrella of discipline.

“Our perspective is that it’s just a behavior, we don’t give it a label,” says Council Oak executive director, Patti O’Donoghue. “It’s not addressed as a curriculum topic as much as it’s handled as part of self-regulation.”

Teachers act as guides at Council Oak Montessori, modeling appropriate behavior for children in the classroom.

At Holy Trinity School in Westmont, the school applies the same overriding message to all situations. “We ask the four same questions about everything,” says Principal Dr. Charles Terry. “Is it true? Is it kind? Is it necessary? Is it what Jesus would want?”

If a child answers “no” to any of the questions, the behavior must stop. “Those four questions become the basis for the discussion that will follow,” says Dr. Terry. “And the kids will tell you, you’re guaranteed to get tripped up by the last question.” Whether schools use the teachings of Jesus Christ or ethics training like Character Counts, it’s helpful to have guidelines for kids to follow.

Problem identification can be a challenge for teachers who don’t always witness the behavior. Early detection is imperative and schools are working diligently to ensure that teachers are prepared for this aspect of their job. “Each year, we do a faculty read of two professional books,” says Musiala. “For several years, we focused on the topic of bullying.”

Although teachers at all schools look for signs of this type of behavior, at Holy Trinity School, educators also depend on kids to keep teachers informed. “The teachers don’t want to advocate being a tattle tale, but these are things they need to know,” says Terry. Creative means of collecting information, like an anonymous “tell the teacher” journal in one classroom, makes it easier for kids to speak up.

“Kids have to know that it’s cool to tell your teacher when it gets to be too much,” says Lakefront’s Rogers. “They have the tendency to stop telling at a certain age – they’ll either accept it or meet it with aggression.” Teaching kids that it’s right to say “enough is enough” is key.

In the spirit of teaching self-regulation, teachers at Council Oak mediate adult-style conflict resolution sessions with pre-adolescent students. Children are asked to communicate by writing to each other, explaining what happened from their perspective, describing how they felt and suggesting ways they’d like to be treated in the future.

“As children get older, they learn how to do this and can skip the writing part and handle things verbally,” says O’Donoghue. “They build on what they learn at each stage of development until they are acting like adults.”

At Pope John XXIII, every incident is investigated. “We never say that kids will be kids, we never tell kids to ignore what’s going on,” says Musiala. At most institutions, discipline is handled on a case-by-case basis after problems have been identified.

After discussions and attempts to modify behavior, there are times when a suspension, or worse, is necessary. “In the worst scenario, we have expelled children for bullying behavior,” says Musiala, who has been principal for twelve years and an educator for thirty-five.

Parental involvement in the process is seen as a crucial component by educators. Parents should become knowledgeable via the many available resources in bookstores and online.

“If a parent tells kids to ignore inappropriate behavior, they are not helping,” says Musiala. “They’re allowing the status quo to continue.”

The same goes at Lakefront Academy. “We let parents know that our experience proves their child is not the first to go down this road,” says Rogers. Gaining home support is essential whether you’re dealing with a child exhibiting inappropriate behavior or helping a child that’s been bullied.

“Sometimes parents need a gentle reminder that they can reiterate our teachings at home,” says Rogers. “Our terms like “behaving in an acceptable manner” and “taking a moment of reflection” translate into homework for parents.”

Children, educators and parents now know that the old adage about sticks and stones could not be further from the truth. Survivors of a bullying scenario, no matter what their role, understand that its effects are harmful and can last a lifetime. Twenty-first century challenges further complicate matters as kids grow.

“Access [to technology] and more lack of supervision than there was years ago give kids more of an opportunity to act this way,” says Dr. Terry of Holy Trinity. Combating these new world challenges with parent and teacher efforts, informed students and early intervention, will surely help.