Want to know what your baby is saying? 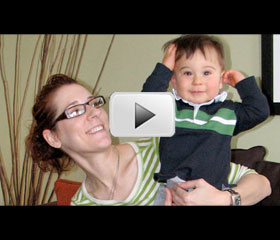 You’ve fed, changed and burped your little one. You rocked him until the room is spinning. But your baby needs something and figuring out what could earn you your first full-night sleep in a week.

“When babies are new – we’re talking zero to 12 weeks – the cries that you hear are expressing a need,” said Oak Park message therapist Mary Cay Cavanaugh. Cavanaugh teaches Dunston Baby Language, a system that provides a solution for new parents who leave hospitals wondering why they didn’t get an instruction manual with their bundle of joy.

The language system delineates five distinctive sounds and assigns each a phonetic word and meaning: “neh” for hunger, “owh” for tired, “eh” for burp me, “heh” for discomfort and “eairh” for having gas.

“Parents have known forever that babies are trying to tell them something,” Cavanaugh said. “But they don’t know what it is.”

During classes parents learn about baby language creator Priscilla Dunston. Dunston is an opera singer and now an entrepreneur who, from age 5, learned she had a “photographic memory” in terms of sound. This ability allowed her to play complicated pieces of music, note for note, after only hearing them once.

When she became a mother, Dunston realized that the sounds her baby made followed patterns and were not unique. Everywhere she went, Dunston heard babies utter sounds before they actually started to wail. These “pre-cry” sounds turned out to be extensions of an infant’s natural reflexes.

In Cavanaugh’s classes, parents not only learn these sounds, but also techniques to meet the associated needs and resolve issues common to infants. For instance, laying a baby across the lap and rubbing the child’s back or laying Baby on its back and gently bending the knees upward are ways to relieve gas.

At home, parents listen to the Dunston language system DVDs of various baby cries to become attuned to the distinctive part of each of the five words so they can recognize them from their own child.

Keri Morrison came across Dunston Baby Language when she was trying to figure out why her second child, Owen, was crying so much and why he pulled his knees to his abdomen.

“At first we heard a lot of the ‘eh’ and ‘eairh’,” said Morrison, a social worker who lives in Oak Park. “He was in a lot of discomfort.”

She learned from attending Cavanaugh’s classes that she wasn’t burping her son long enough. The remaining gas moved to his stomach and caused him a lot of pain. Cavanaugh showed Morrison how to alleviate her son’s pain and Owen was a much happier baby within 48 hours, Morrison said.

“There is evidence that newborns do express emotions universally, so it’s possible they might pick up other things,” said Maria Sera, regarding the Dunston’s system. Sera researches linguistic and cognitive development at the University of Minnesota.

The language system is plausible and is similar to advice doctors have given parents for years about paying attention to their baby’s cues, noted Dr. Andy Sagen, a Chicago area pediatrician. He stated in an email that with trial and error most parents learn their baby’s language within six months.

Dunston’s system is applied from birth to 12 weeks, although Morrison said her son still uses some of the words at nearly a year old because he knows they bring results.

Cynthia Mason, a certified nurse midwife, said that if a system like this works, it might benefit new mothers during their initial adjustment period.

“Many times, at two weeks post partum they [new mothers] are short on sleep, trying to understand the needs of the child,” Mason said. “[The system] may help some parents go through that period of time because they are able to communicate instead of really guessing.”