How to Protect Young Eyes While Learning Is Virtual 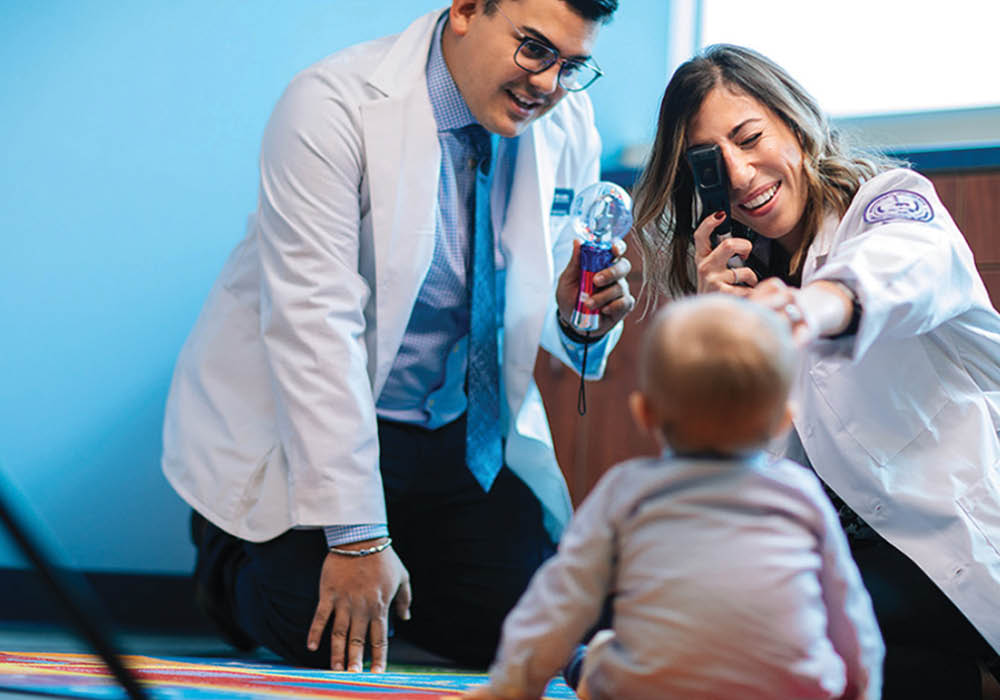 Many kids are spending a lot more time in front of screens as schools go virtual. Eighty percent of how we learn involves vision, and more time focused on screens can lead to eye strain, headaches and other issues. Fortunately, there are several ways parents can keep their children’s eyes healthy in the long run.

“You can take the proper precautions to ensure that this new lifestyle is still a healthier lifestyle and that we can do things to make sure that our children’s eyes stay healthy while we’ve sort of rerouted how we’re learning,” says Dr. Jenelle Mallios, a pediatric optometrist with the Midwestern University Eye Institute and associate dean of clinical affairs at MWU’s Chicago College of Optometry.

Dr. Mallios offers several suggestions for parents, starting with scheduling an eye exam for your child. While many kids may have vision screenings at school, other issues can come up throughout the year that aren’t addressed at the screening. Plus, students may not receive in-school screenings if their classes are virtual.

Reduce eye strain by increasing the distance between your child and the computer, phone or tablet screen. Dr. Mallios says a good trick is to make a fist, put it up to your nose or chin and stick out your elbow. The screen should be at least this distance from your face. It’s best to keep the screen at or slightly below eye level, not above the eyes. Also make sure the illumination of the screen matches that of the room. If you’re in a dark room, dim the brightness of the screen, Dr. Mallios says. If children wear glasses, an anti-glare coating can help.

Unlike adults who tend to lose close focusing as they age, children’s eyes generally have a strong focusing system. But focusing on a close object or screen for long periods of time forces the eye muscles into overdrive. Dr. Mallios recommends the 20/20/20 rule to give your eyes a break: every 20 minutes look at something 20 feet away for at least 20 seconds.

Screen time also impacts blinking. Research has shown that blinking is reduced by about 50% when we focus on a device, Dr. Mallios says. This disrupts our tear film and can lead to burning, redness and blurry vision. It’s more troublesome for children, since blinking helps form important glands in their developing eyes. Dr. Mallios recommends parents remind their kids to “blink, blink, squeeze” their eyes while they’re using technology. Preservative-free artificial tears can help, but she does not recommend using Visine or “get the red out” eye drops.

Dr. Mallios also gets questions about the blue light emitted by computer, phone and tablet screens. While its impact on sleeping habits and melatonin levels is better understood, it’s less clear how it affects the retina and eye structure. Dr. Mallios says wearing blue light-blocking glasses can’t hurt, but the verdict is still out on how helpful they are when it comes to eye health.

Look out for symptoms such as squinting, rubbing eyes, blurred vision, burning, itching, redness or changes in behavior. But don’t rely on kids to tell you when their eyes are blurry, because sometimes that’s all they’ve known, Dr. Mallios says. Parents should consult their children’s eye doctor for proper recommendations, she says.

“It’s just really important that we have these discussions and keep these tidbits in mind going forward since this has sort of become the new normal,” she says.

Best Beaches in Chicagoland for Families

The Most Popular Baby Names in Illinois

Katina Beniaris -
Oh, baby! These are the baby names that Illinois parents loved in 2021.
Read more
You

What’s in Your Diaper Bag?

Five Instagram moms gave us an inside look at the top can't-forget items that they keep in their diaper bags.
Read more
Guides

Show your support by shopping at these local businesses.
Read more