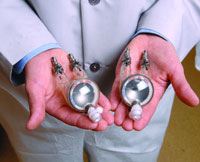 Jack Van Pelt was born on Oct. 10, 1997, with 10 fingers, 10 toes and light blond hair. He also was bright green, a telltale sign that his heart wasn’t pumping enough oxygenated blood to his organs.

February is Heart Month, and here’s how you can learn more about
the most common birth defect — and how you can help.

The Children’s Heart Foundation
has published a free e-book for parents.
It’s My Heart describes in plain language
(English and Spanish) the most common types of  heart problems
and the tests, surgical procedures, and treatments you should know
about.

“He looked like the little Sprout on the Green Giant cans,” his mom, Megan, remembers.

Jack’s condition wasn’t a surprise — doctors found a heart defect during an ultrasound — but it still jarred the Van Pelts, first-time parents in their early twenties.

“You spend all these months imagining what your baby is going to look like that first moment,” Van Pelt remembers. “No matter what the doctors tell you, you’re not prepared for something like that.”

Jack was born with his pulmonary and aortic valves reversed, five holes in his heart wall and his organs starved for oxygen. He was whisked out of the delivery room before his parents even had a chance to hold him and spent two months in the neonatal intensive care unit at Children’s Memorial Hospital in Chicago before he was strong enough to undergo surgery.

But when he came out of the 11-hour procedure, he was pink.

“You worry about a lot of things when you’re pregnant, especially when you’re as young as we were,” says Megan, now the board president of the Children’s Heart Foundation, a national organization dedicated to supporting pediatric heart research. “But heart failure? Not one of them.”

Maybe it should be: Congenital heart problems are the most common birth defect, affecting about 1 in 100 newborns. More than half of them will require at least one invasive procedure and not all are as lucky as Jack Van Pelt.

According to the Children’s Heart Foundation, one in three deaths related to birth defects is attributable to heart failure.

Heart problems don’t always show up right away. Tiana Tillman was given a clean bill of health when she was born in February 2008 after what her mother, Jackie, calls the easiest of her three pregnancies. Charles Tillman had just wrapped up his sixth season as the Chicago Bears’ starting left cornerback, and the couple was looking forward to spending the offseason with their newborn.

But in mid-May, 3-month-old Tiana became fussy. Thinking she was coming down with a cold, Jackie took Tiana to the pediatrician, who said to keep an eye on her overnight. That night, Tiana struggled to breathe, stopped eating and was making grunting sounds. After an ecocardiogram at a Lake Forest emergency room showed her heart functioning at about 8 percent, she was airlifted to Children’s Memorial Hospital in Chicago, where doctors put her on a ventilator and began a drug regimen to aid her failing heart.

Within 48 hours, Tiana Tillman had gone from healthy to not.

“We were blindsided,” Jackie Tillman says. “I went from thinking, at worst, that she had a cold to doctors telling me she could die.”

The diagnosis was dilated cardiomyopathy: Her heart was too big and too weak. The drugs stopped working and in late June, Tiana was placed on a heart-and-lung machine. It kept her alive but also required her to be intubated and paralyzed, which can weaken the lungs and raise the risk of infection.

“I remember sitting there, watching her; she didn’t move, she didn’t smile, she didn’t do anything,” Tillman says. “Those weeks were the hardest.”

Bypass is also not a long-term solution, and Tiana’s time was running out. She had been moved to the top of the transplant list, but doctors weren’t sure her heart would last long enough. So they recommended the Berlin Heart, a less invasive and more sustainable alternative to the bypass machine. Developed in Germany almost 20 years ago, it is not FDA-approved, but has been used on a case-by-case basis in the United States since 2000.

Tiana was the first child in Illinois to receive the Berlin Heart, and the six-hour procedure performed at Children’s Memorial went smoothly. Quarter-sized pockmarks on her stomach are permanent reminders of the device that kept her alive while waiting for the transplant, which became available in August.

She faces another heart transplant-the longest anyone has spent on a donor heart is 20 years-and a lifetime of anti-rejection drugs. But she turns 2 this month, a birthday her parents weren’t sure she’d see.

“Looking back now, I can see how close we came to losing her,” Tillman says. “In that moment, it’s hard to believe your child is that sick, but every day now, we know we’re lucky.”

The heart ranks low among medical mysteries. The basics of the circulatory system were mapped out back in the 1600s, and today we have Pacemakers and artificial valves and drugs that do everything from lowering cholesterol to controlling heartbeats.

But when little hearts stop working the way they’re supposed to, doctors often have more questions than answers.

Some defects are genetic. Some are caused by viruses. Still others are just developmental quirks, the result of a crossed wire in early pregnancy that leaves a hole unclosed, or one valve where there ought to be two. Most cases go into the books labeled “idiopathic,” a medical shrug of the shoulders.

“(Heart defects) are not an all-or-none phenomenon, and each patient is different from the next,” says Dr. Sunjay Kaushal, Tiana Tillman’s surgeon at Children’s Memorial.

This range of causes and symptoms makes it hard to get a big-picture view of cardiac problems, he says, and even harder to do broad studies, secure funding and track results.

Of the nearly $3 billion the National Heart, Lung and Blood Institute spent on cardiac research in fiscal year 2008, only 7 percent went to studies focused on pediatric heart problems.

Neither the Van Pelts nor the Tillmans have clear answers to why their children’s hearts failed. But both families are working to change that.

Leaving the cardiac floor of Children’s Memorial 12 years ago, Van Pelt picked up a brochure for the Children’s Heart Foundation. The fledgling organization was just a year old, founded by a Winnetka mom whose 8-year-old son had died of heart failure.

The foundation now has five regional chapters nationwide. As president, Van Pelt oversees research grants and lobbying efforts, and heads fundraising and awareness campaigns. To date, the foundation has donated more than $3.6 million in seed money to researchers, many of whom have gone on to get federal funding.

“You’re so thankful to be coming home with your child because you know so many people aren’t,” Van Pelt says. “We wanted to give something back.”

The Tillmans were no stranger to charitable work before Tiana’s illness. The couple had started a foundation in 2005 to support inner-city education, and Charles was nominated in 2007 for the Walter Payton Man of the Year award, which recognizes NFL players who have done extensive charity work.

But after Tiana’s transplant, the Tillmans refocused their efforts. The Cornerstone Foundation now helps families do things like pay bills or find temporary housing, and the couple is also unveiling a locker at Children’s Memorial this month stocked with laptops, video games and DVDs. And in October, the Tillmans spoke in Washington, D.C., to lawmakers about the need for FDA approval for the Berlin Heart.

“Getting the word out-and getting the money to follow it-is how we can make a difference,” Van Pelt says. “Awareness is half the battle.”

If that’s true, then the other half is being waged in leading medical centers and research labs like Children’s Memorial. Prenatal screenings are far more accurate than even a decade ago, and research like Kaushal’s, which explores using cardiac stem cells to treat certain defects, is opening new treatment avenues.

“We understand things now … that we never could have anticipated, and we’re perfecting surgeries that didn’t even exist a few decades ago,” Kaushal says. “Ten years ago, we were just trying to keep these kids alive.”

One of those kids was Jack Van Pelt, who today is a wiry, freckled 12-year-old, small for his age but doing well. He’ll still need an aortic valve replacement and struggles with short-term memory loss and attention deficit disorder, likely effects of the time he spent on cardiopulmonary bypass, which can restrict blood flow to the brain.

But he made the sixth-grade basketball team this winter, and his parents bought him a set of golf clubs to substitute for the contact sports he can’t risk playing.

“We were lucky; a lot families aren’t, and that’s why we’ve gotten so involved,” Van Pelt says. “Doctors say to me, ‘If we knew then what we know now…’ So my thing is, let’s know now. Let’s not have to say that in 10 years.”

Lori Orlinsky -
Here are some ways to gauge their readiness for a new camp experience.
Read more
Guides

The Hyde Park nonprofit is inviting children of all colors and backgrounds to play, learn and grow together.
Read more