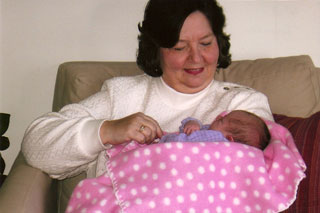 Researchers believe that stem cells, extracted from umbilical cords at birth, may hold the promise of a cure for more than 70 diseases, including cerebral palsy, type 1 diabetes, heart disease and leukemia.

That could happen after President Obama, in early March, reversed the Bush Administration’s restrictions on stem cell research.

Stem cells, unspecialized cells that divide to create blood, tissue and organ system cells, havemade headlines because ofthe controversy over whether they are obtained from embryos. Extracted from embryos typically leftover from fertility treatments, these cells have spurred an ethical debate.

But few people know that other types of stem cells exist.

Bone marrow stem cells, extracted from adults, have long been used to treat leukemia through bone marrow transplants. In the last two decades, researchers have begun exploring the use of cord blood stem cells, extracted from umbilical cords and the adjoining placentas at birth, to treat diseasessuch asleukemia and cerebral palsy. Researchers have learned much through clinical studies, but cord blood stem cell knowledge is still in its infancy, according to Dr. Olga Frankfurt, hematologist at Northwestern Memorial Hospital.

“Stem cell research has been squelched because of the policy set forth by the Bush administration. There has been a lack of funding for any stem cell research. We hope that will change,” says David Zitlow, senior vice president of communications for Cord Blood Registry, in Tucson, Ariz., the largest private bank in the country, which currently holds a quarter of a million units of umbilical cord blood for families’ personal use.Parents may choose tosave their baby’s cord bloodfor the baby’s or a family member’s future useor parentsmaydonate to a public banking service that matches donations to patients in need.

“We need help educating and getting the word out, so at least women know that they have the option to donate or bank their cord blood,” Hlavacek says.&quot;Out of any administration, this one’s our best shot.”

Hlavacek has been one of the key players in passing legislation that requires Illinois physicians to present expectant parents with their cord blood options. Unfortunately, the laws are not easily enforced.

For transplant, bone marrow stem cells must match the host on at least nine of10 human leukocyte antigens, markers on the cells’ chromosomes that signal compatibility, Frankfurt says. Cord stem cells need only a four-out-of-six match. Cord blood also does not require an invasive procedure for transplant,as bone marrow transplants do.

But on rare occasions, they can attack the entire body. Called&quot;graft versus host disease,” this potentially life-threateningside effectmakes cord blood stem cells the second choice for many doctors, including Frankfurt.

“Stem cells are the best option in terms of efficacy,” Frankfurt says.&quot;But you have to weigh the risks and benefits for the patient.”

Frankfurt is working to launch a clinical trial for preventing and treating cord blood graft versus host disease.

Like many researchers, her project has been stalled as she waits for funding. Until the new administration’s policy change takes effect, cord blood stem cells will be the backup plan.

K. Aleisha Fetters, a student at Northwestern University’s Medill School of Journalism, is a reporter for Medill Reports, the university’s news service.

What’s the secret to igniting a love of learning in your child? An appropriate early learning environment offers many advantages of preschool, says an expert from Smart Love Preschool.
Read more
You