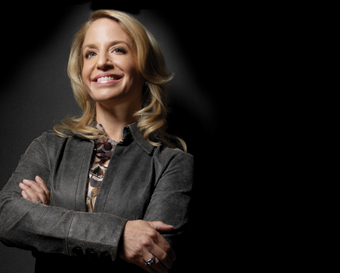 Dr. Laura Berman is so much fun to talk with that you could easily forget you aren’t chatting with your best gal pal over lunch-until she unabashedly talks about s-e-x as the waiter walks up. He doesn’t come back.

In January, relationship expert Dr. Laura
Berman launched her new show, “In the Bedroom with Dr.
Laura Berman,” on Oprah’s new network, OWN. Each episode follows
one couple through an intensive relationship overhaul. Berman says
it’s filled with how-to’s viewers can use in their own
relationships.

She also is out with a new book, It’s Not Him, It’s You. Berman
describes the book as a wake-up call to women. It offers women
tools to take charge of their love life, to stop sabotaging their
happiness with negative behaviors from past relationships and to
get the love and intimacy they deserve.

Berman, Chicago parent of three boys, renowned relationship and sex expert, talk show host for whom no topic is off limits and best-selling author, has made it her life’s work to get couples to focus on loving, living and, yes, sex. Throw kids into the mix-Berman lovingly describes kids as 24-hour need machines-and those romantic and intimate days of early couplehood can vaporize.

“The default position is to put all our focus on them, all of our hopes, all of our dreams, all of our hurts and damages we want to undo through them. They become the focus of our existence. Then they leave and we turn around and look at each other and say, ‘Who the hell are you?'”

That’s the question she wants to help you avoid.

We hear this all the time: We’re busy moms (and dads) and there’s just no time for sex. What do you say to that?

We are really busy. Your kids obviously are the priority, but if you don’t make your relationship the priority, then the foundation that your kids depend on starts to fall apart. We all like to think, “Oh, we can just sweep it under the rug, we’ll get to it later,” because getting the carpool done or getting the cookies baked for the bake sale, running that extra errand or doing an extra e-mail is important. But you are actually doing your kids a significant disservice when you do that because the biggest gift and the most important foundation for them is not only a stable home, but a model of what a loving, intimate relationship looks like.

You can definitely co-exist a certain amount of time and many couples do, but eventually it comes to bear and the connection between the two of you, the emotional intimacy, the physical non-sexual intimacy, the camaraderie, the sense of being allies and on the same team, all of that starts to disintegrate when you don’t have that intimate physical connection.

How do people make time?

We all make time for what we think is important. It’s just prioritizing and making that the priority. I think we all tend to be child-centric, even more so now than ever before, and our kids to a large extent are benefiting from that. They have more opportunity; we’ve evolved in our thinking in how to raise them and how to give them new perspectives and new experiences. Instead of sending them to that sixth after-school activity for the week, couldn’t you just give up one of those and let them have a quiet afternoon at home and give you some downtime to recharge your batteries?

It’s also a matter of scheduling it. I think we’re so into scheduling our kids and our lives, but we balk at scheduling sex. If you expect sex to happen spontaneously, certainly you are going to be waiting a long time for sex to happen. It doesn’t happen because you are too overscheduled and overstressed.

Schedule sex in your private calendar (not the one on the refrigerator, of course). In pen. Even if you have to change the appointment every week, at least once a week have a sex date.

Don’t expect sex to happen at night, when you are most taxed, most exhausted, then can’t do it until the kitchen is cleaned, lunches are made. Get creative about setting the alarm early one morning a week before the kids get up or plugging them into a cartoon for 15 minutes on a weekend or when they are off on a play date, or jump in the shower with each other.

What do you do or say when the kids are “on to you”?

It’s good for them. They don’t need to know the details (she laughs). I see all the adults who grew up who didn’t know what a normal loving relationship looked liked; they learned it was bad, wrong, dirty. That gets internalized. My son knows we have sex, we don’t discuss the details at all. He knows it’s part of a healthy, loving relationship. If they are “on to you,” if they start getting grossed out, say, “All I can hope for you is when you grow up, you will have the kind of loving relationship like I have.” It’s nothing to be ashamed of, embarrassed (about).

If you had one takeaway for parents:

Don’t think that your relationship can wait; don’t think that you can sweep things under the rug and just say I’m sorry, I’m too stressed and I don’t have time. You do have time; you just have to make it. And recognize that your kids will benefit significantly more from having a model of what a loving relationship is and having a solid foundation in their home of two parents who are solid in their commitment to one another.