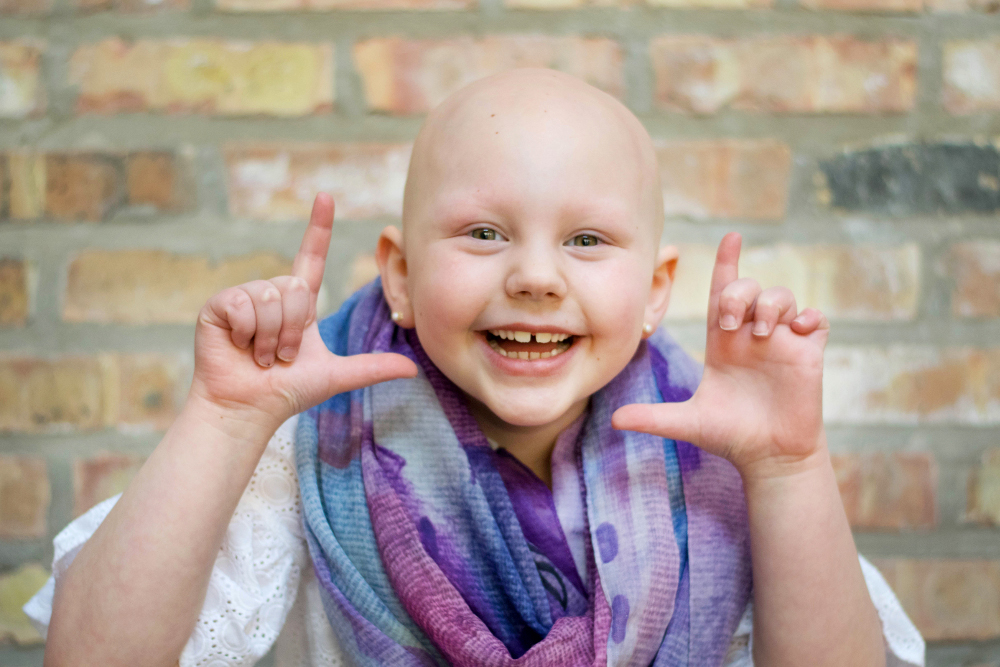 In a world plagued with political disagreement, violence and bullying, it’s easy to lose sight of the good that exists. If you need a reminder, look no further than these six amazing kids, each of whom is doing his and her part in the community to make a difference in the world.

Beauty inside and out: Rosie Quinn, 7

Seven-year-old Rosie Quinn wants to spread the message that bald is beautiful. At 2, the Chicago girl was diagnosed with Alopecia, an autoimmune disease that attacks hair follicles, causing hair loss.

Growing up, Rosie and her family became desensitized to the stares she got from other children when she went out in public. Innocently, strangers often confused her hair loss with cancer, or thought she was a boy.

In an effort to boost Rosie’s confidence, her mom, Paula, got her daughter a one-of-a-kind headscarf made from Rosie’s original artwork. When Rosie looked in the mirror for the first time, she couldn’t stop smiling. That’s when Coming Up Rosies was born.

Coming Up Rosies is a charity with one mission: to bring those same smiles to children who have experienced hair loss. Coming Up Rosies sells preprinted head scarves made from Rosie’s paintings as well as scarf making kits that let kids create their own masterpieces. All proceeds fund art therapy programs at children’s hospitals across the globe.

“I loved how the head scarf made me feel when I needed it,” Rosie says. “They covered up a part of my body that looked different. Instead of seeing my bald head, people saw my art.”

Ironically, Rosie doesn’t wear scarves on her head any longer because she feels confident in her appearance.

“As a parent, Rosie saying she doesn’t need to wear the head scarf is music to my ears,” Paula says. “I wish I had her confidence. I wish everybody had Rosie’s confidence.” 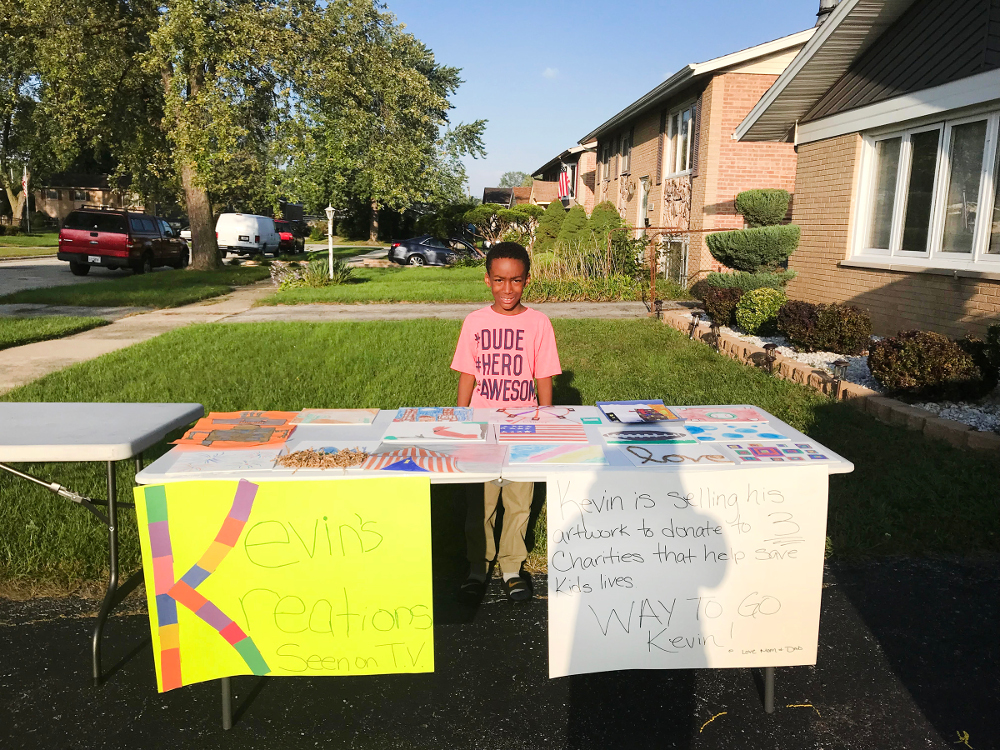 For the past year, 8-year-old Kevin Hunter III has been driving his mother, Shanee, crazy. But not for the reasons you’d think. The second-grader from south suburban Alsip wanted to find a way to sell his original artwork collection and donate all of the money to charities that benefit children.

Shanee and her husband, Kevin Jr., try to be honest with Kevin when he overhears news headlines on TV or sees a commercial for an organization like St. Jude Children’s Research Hospital.

“We explain to him that he is very fortunate, and other children have different circumstances,” Shanee says. “We have instilled to him since a young age that he shouldn’t take anything for granted. And he doesn’t. I’m really in awe of his heart and the maturity he’s shown.”

Kevin has been drawing and painting since kindergarten, and his pieces range from nature scenes (his favorite) and robots to animals and characters.

This summer, Shanee finally gave in, allowing Kevin to participate at a community-wide garage sale. His parents also set up a GoFundMe campaign on his behalf. Through both outlets, Kevin raised more than $600, which he hand delivered to St. Jude Children’s Research Hospital, Ronald McDonald House Charities and Ann & Robert H. Lurie Children’s Hospital of Chicago.

“I feel proud of myself,” says Kevin, who is in the process of making more art to sell at local craft shows. “It feels good to help.” 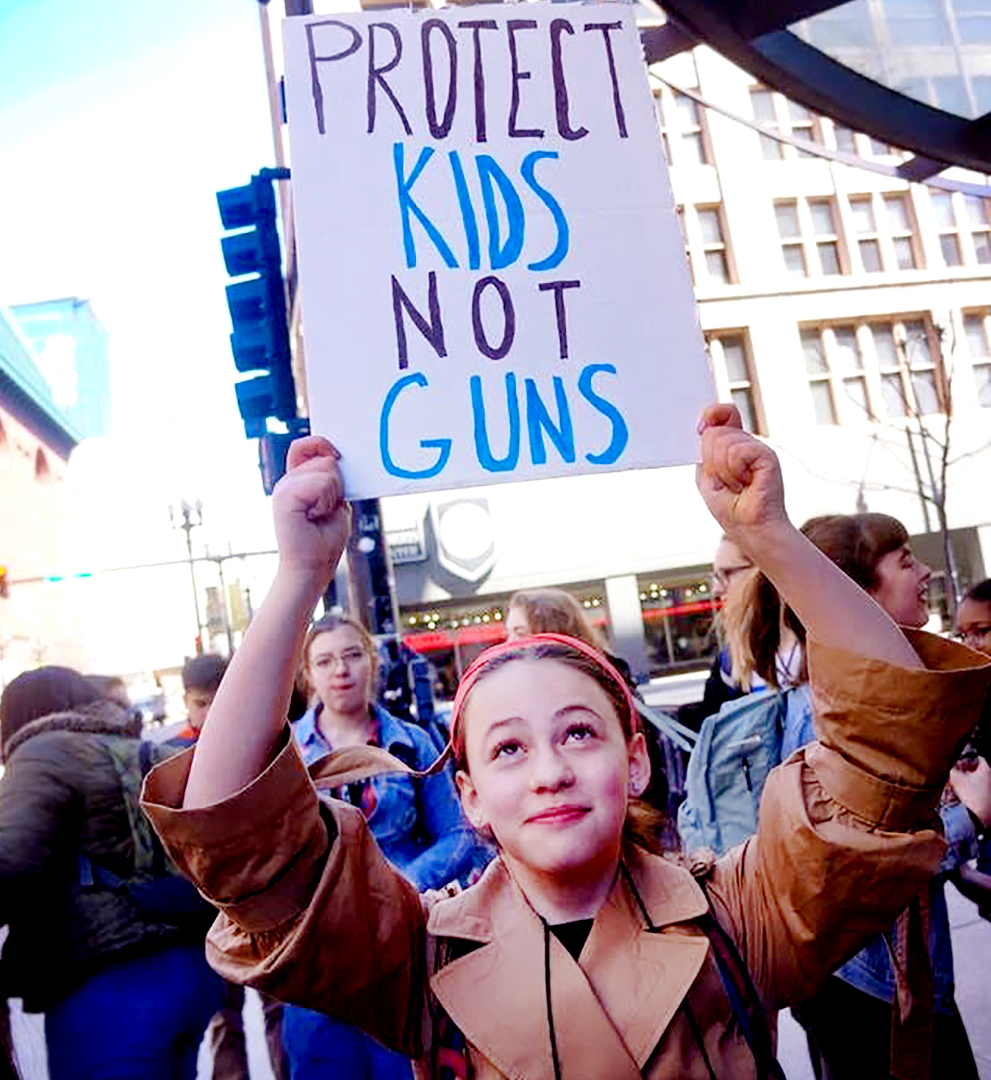 From the day she was born, Tova Love Kaplan was destined to be extraordinary. Her name, which means “Good Love” in Hebrew, is reflective of how she lives. The 14-year-old freshman at Whitney M. Young Magnet High School is a social activist, determined to spread the message that everyone has a voice.

She serves as the national youth director for Constituting America, a nonprofit that brings the Constitution to life in classrooms across the country. In September, Tova traveled to Washington, D.C., to deliver remarks alongside the deputy secretary of education on Constitution Day. The speech was livestreamed to schools nationwide.

“The Constitution is a living, breathing document that impacts us every day,” Tova says. “Even though we can’t vote, students still have a right to this document. We can use it to change things for the better.”

Tova stands by her words. In March, she was a lead student organizer of the March for Our Lives Walkout at Whitney Young, spearheading logistics of the day, including calling media, making signs, phone banking to legislators and rallying the 2,000+ participants, megaphone in hand.

This fall, she worked with Whitney Young administration to establish the first student chapter of Bake Sale for Justice, a group that sells baked goods and donates all proceeds to social justice causes.

“Kids absolutely do have a voice and if we speak loudly and persistently, adults will listen to us,” Tova says. “Although it’s hard sometimes, we need to stand up and make our voices heard.” 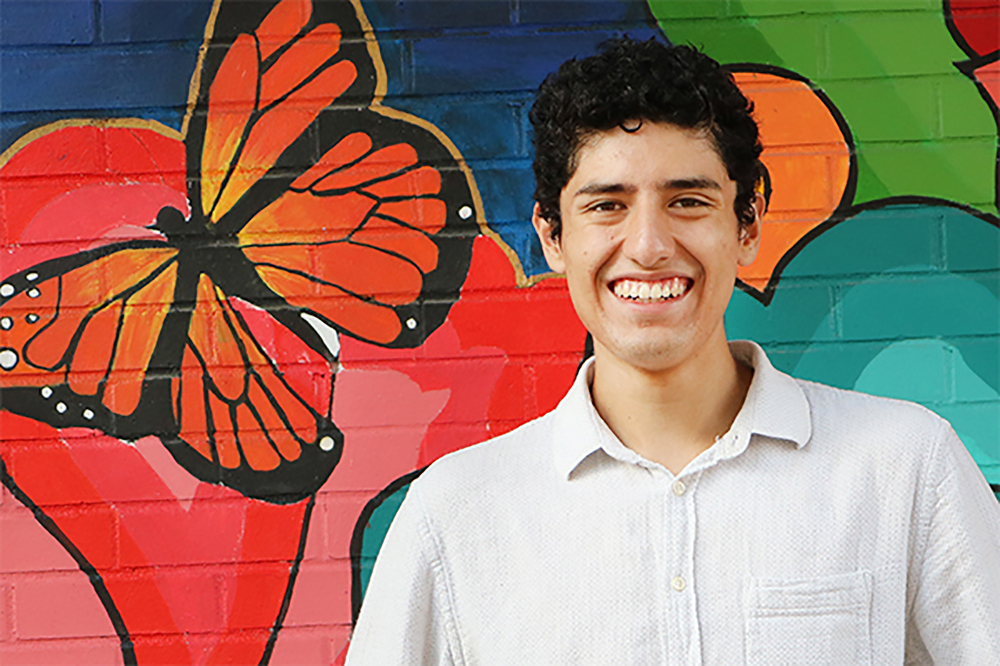 Growing up, Armando Pizano struggled in school. The South Side boy from the Back of the Yards neighborhood, whose community was often plagued by high levels of crime, gang violence and poverty, needed more resources to help him excel.

It wasn’t until his older sisters stepped in to mentor him that Armando began to thrive in school. With their support, Armando entered the selective enrollment high school, Jones College Prep, at the top of his class, just as many of his friends were dropping out. Though painful to watch, this motivated Armando to start The Bridge Tutoring Program his junior year.

The largest student-run tutoring initiative, The Bridge Tutoring Program prepares elementary school students in under-resourced communities for high school and beyond through free weekly tutoring. The program is currently in five high schools and four elementary schools in Chicago’s South Side, and plans to expand to Albany Park in 2019.

“What makes this program special is that the students are being mentored by high schoolers who grew up under very similar circumstances,” says Armando, now 18 and attending college at The University of Chicago. “It is a good reminder for school-age kids that a successful future is within reach.”

Armando was named the recipient of the 2018 Gloria Baron Prize for Young Heroes, which celebrates young people from across the U.S. and Canada who have made a significant positive difference. He plans to use part of his prize money to buy supplies for The Bridge Tutoring Program.

Much more than fun: Byron Siragusa, 9

Two years ago, Byron Siragusa spent 27 long days at Ann & Robert H. Lurie Children’s Hospital of Chicago due to complications from a ruptured appendix. The then 6-year-old Chicago boy passed time by keeping up with the summer Olympics.

While this started as a simple distraction, it led to a big idea: Byron wanted to find a way for other kids to get through their hospital stays.

With the help of his mom, Julie, Byron launched a Kickstarter campaign that went viral, reaching his funding goal in just four days. On Kickstarter, backers could opt to buy a game for themselves, donate one to a hospital, or both.

Continent Race is designed for two or more players, ages 7 and up. The game encourages children to learn the continents, countries and flags of the world. It’s a card game and a race to see who can collect the most countries from each continent first.

By the end of the year, Byron will donate Continent Race to 50 children’s hospitals across the county. In the coming months, he plans to launch an educational video series in which he interviews interesting people who are doing great things. The hope is that the videos will be interactive and shown in patient rooms at children’s hospitals.

Florence to the rescue: Flo Wisniewski, 5

Flo Wisniewski isn’t used to hearing her given name—Florence—unless she’s in trouble for fighting with her siblings or not cleaning her room. But in September, the name Florence was all over the news, as Hurricane Florence swept through the Carolinas.

When 5-year-old Flo, of Portage Park, found out she shared her name with the hurricane, she told her parents that as a fellow Florence, it was her duty to help.

Flo and her father, Paul, created a poster of the hurricane’s path superimposed with “the other Florence’s” face. They also set up a donation box at Flo’s preschool, asking for non-perishable food, formula, diapers, toiletries and bottled water. Flo rode around in a wagon, going door-to-door in the neighborhood asking people to donate what they could.

“I knew it was the right thing to do to help the people who needed help,” Flo says.

After word spread on social media, the Wisniewskis’ home, garage and porch became filled to the brim with donated goods and Amazon packages sent by strangers. Inspired by her daughter’s passion, Flo’s mom, Tricia, partnered with a disaster relief group in Ohio that added Flo’s donations to a truck delivering supplies to the Carolinas. When they were picked up, Tricia estimates two-thirds of the truck was filled.

In the midst of her donation drive, Flo turned 5. But the little girl put off the celebration.

“My mommy bought me a packing tape dispenser so I could finish wrapping the boxes,” Flo says.

This article originally appeared in the December 2018 issue of Chicago Parent. Read the rest of the issue.