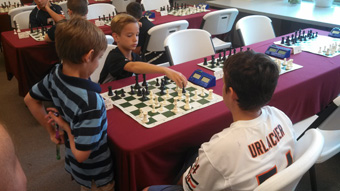 In a misguided attempt to introduce my husband to the charms of chess, I convinced Joe to join the boys and me on a trek to Naperville for an early morning Labor Day tournament this past Monday.

That was a mistake.

Right when we arrived, I surveyed the competition. I recognized immediately that my kids were in big trouble. There was a boy wearing a shirt that read: “I’m a KNIGHT… NOT a horsey!” While my kiddies may have done well in chess tournaments of the past, all signs were pointing to a complete rout this day. After all, who knew they even made funny chess shirts?

We delivered Danny and Jack to their respective tables for the first match, but then my husband got antsy and started bombarding me with a litany of questions and grievances:

“How many rounds are there?”

“How long does this usually take?”

“I didn’t know this many people even played chess.”

“I can’t believe we’re doing this instead of ice hockey.”

“Some days I wonder how we’re even married.”

In an effort to distract my increasingly agitated husband, I suggested we take a walk. Joe perked up and excitedly steered us towards a nearby Walgreens where he could grab the latest Fantasy Football magazine for his upcoming draft.

For those unfamiliar with fantasy football, be glad. Be very glad.

To help shore up my argument for a continued focus on chess, I went into a lengthy oration on how fantasy football and chess are practically the same thing, but I was quickly shot down: “Nice try, Atticus Finch. But no.”

While Joe giddily flipped through the pages of his magazines trying to glean who the “sleepers” and top-ranked players of the NFL were, I perused the candy aisle instead.

And guess what I found?

Freaking Halloween candy. Bags and bags of it. ON LABOR DAY.

I was astonished. It was Sept. 2. And yet I now had access to specially priced bags of Halloween Kit Kats and Butterfingers. Forget the fruit of knowledge, I would have damned all of mankind for a simple Almond Joy at that most precarious of moral moments.

I fled the aisle before I reached the point of no return. Joe was still talking about whether he should let Aaron Rodgers go or try to pick up a new quarterback in the draft. I don’t think he had noticed my absence.

“Why?” Joe asked hopefully. “Are the boys done with all their rounds?”

“No,” I answered honestly. “But we don’t have that much time for you to Yelp all the good restaurants in Naperville.”

If there is one thing Joe loves more than fantasy football, it is finding a new restaurant. His eyes lit up at the promise of foreign food and Yelp reviews.

By the time the day was over, Joe had acquired a stash of football magazines, a full belly, and two sons who suddenly seemed incapable of playing chess.

All in all, my husband considered it a perfect day.

Once I circled back to Walgreens and stocked up on Almond Joys, I was right there with him.

And, to answer his earlier question, THIS is how we are still married.