Parenting in the Age of Alternative Facts, Pt. 1: Critical Thinking 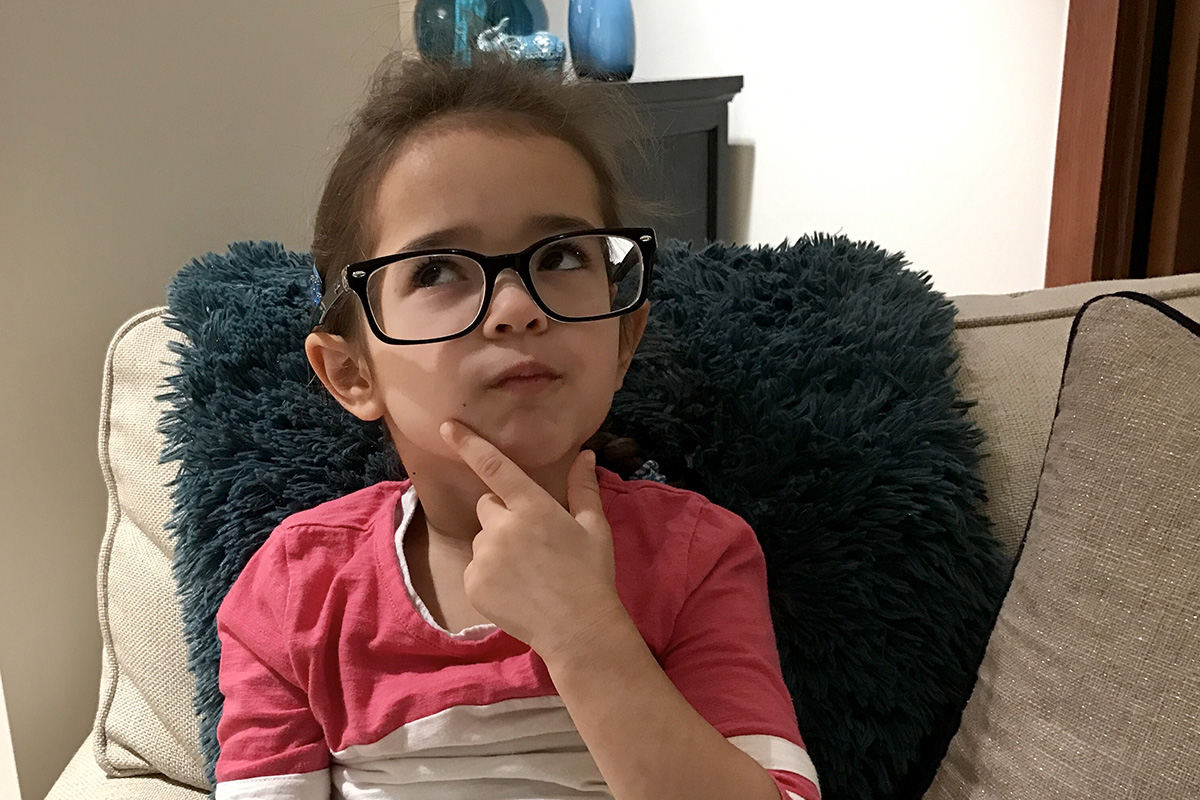 This week’s blog post is by The Paternity Test co-host Matt Boresi, who lives in the Edgewater Glen neighborhood of Chicago with his wife (“Professor Foster”) and their 5-year-old daughter, Viva, who is learning her ad hominem from her ad populum.

Disclaimer: I don’t like Trump. At all. (Have you noticed?) I think he is an existential threat to our democracy and our environment with neither the character nor the brains to be President, and I am both worried for my child and ashamed that this is the President we have given her. I think it is my duty as an artist, a comedian and a writer to call his administration out in my operas, in my comedy and in my blogs. It is the small voice I have and the skill set I possess (to whatever degree I possess it) and my way of doing something besides making snarky tweets and bashing my head against the wall. (Though, I do those things, too.) You may disagree with me. If you do, I hope you will still read this multi-part, non-consecutive series of posts on Parenting in the Trump Era. Even if you support the swollen trust-fund tangelo inhabiting the White House, I hope you’ll take a look at these pieces and consider the values at their core: critical thinking, honesty, decency, etc. These are opinion pieces, though, and I’m not going to feign impartiality. (Also, I’m going to make fun of him.)

In the last few days we seem to have gone through the looking glass. We are told an empty parkway is full, that applauding staffers are actually CIA agents, that the American people don’t want to see Trump’s tax returns. Tweets from a week ago that haven’t been erased are denied. Somehow, citizens who weren’t offended by statements about grabbing genitalia or mocking POW’s and the disabled are shocked, SHOCKED! and aghast when a comedienne makes a tweet in poor taste about a 10-year-old. Between professional liar and hot-dog-on-a-stick uniform enthusiast Kellyanne Conway and professional liar and little-kid-in-his-Dad’s-suit Sean Spicer, there are now high profile Executive Branch employees whose job seem to primarily involve gaslighting us and distracting us from appalling executive orders and legislation with no mandate from the majority of Americans. The mainstream free press is called biased while partisan news and even “fake news” are called truthful. Putin is praised over our intelligence services. Opposition to the “newspeak” and propaganda spewing from our Sunny Delight-tinted Dear Leader is often met with a “stop whining,” “you lost,” “give him a chance,” or “the other candidate did X,” none of which are actual arguments to the problems at hand. For many parents (and most Chicago parents), the new cruelty and dishonesty present in public discourse are extremely upsetting. So, how do we equip our children with the baloney detectors necessary to wade through the new swampier swamp?

Facility with rhetoric and logic have never been emphasized in the American school system. (Perhaps in any school system.) We learn the reading, writing and ‘rithmatic, but not how to detect “BS.” To the contrary, market forces and Madison Avenue spend all day every day training us to be good consumers, whether we realize it or not. We can’t tell a “tu quoque” from an “ad hoc ergo propter hoc,” but we know we need red candles and napkins from Pottery Barn for Valentine’s season decorating. Our economy is based on spending and growth, so it is imperative for corporations to bombard us with advertising and marketing. That’s how capitalism works. It isn’t innately evil, but all that consumer training takes a toll on our ability to tell opinion from fact. Social media isn’t helping. That’s where many of us get our news and are told our opinions, but tweets and posts are shallow dives. I doubt the average citizen has ever really been informed or well-read, but at least there used to be reasonably unbiased newspapers. Now there is Fox and HuffPo and their hysterical headlines. Imagine walking into a parking lot, reading everyone’s bumper stickers, and then choosing whom to vote for based solely on that info. That’s Twitter! If you haven’t seen THIS chart this week, please study it, regardless of your political affiliation. This is how you need to absorb your news. As for learning about rhetoric and logic, adults can read Neil Postman and Carl Sagan. (Both are needed now, but sadly deceased.) But where could we fit BS detection in school curriculum? I’m not sure, but, damn, we need it. Eking it out of the days and days of testing might be a start.

The ability to tell fact from fiction, to dissect arguments and to assemble cogent belief systems are crucial skills for our kids, and the continued survival of the Republic may depend on them being able to tell truth from “post-truth,” but how do we get them there? This is a blog–so I had better give you a bulleted list of shallow and simple solutions for the problem I’ve presented. Hopefully you’ll read further on your own. Here are some values I’m trying to instill in my pre-K-aged daughter … starting now.

While I haven’t yet told my 5-year-old how to find primary sources or scholarly journals, I always ask her to tell me where she learned things, and to consider if they might be biased. A child can understand this. Did the teacher teach her that penguins have blubber, or a cartoon or a friend on the playground? Which is more likely true, and which might have mistakes? How can we double check? We should all be double-checking the blubber we’ve been exposed to lately.

Looks can be deceiving and stats can be manipulated, but let’s always start with what we can see, hear and measure before we get into more esoteric arguments. A child can understand this. Vast swaths of white on the Mall during an inaugural address? Could be manipulated imagery by an evil media conspiracy, could be people wearing sheets, but it’s probably tarp with no one standing on it. (Actually, it could just as likely be people wearing sheets at the “American Carnage” address.) Rider numbers from the Metro? More likely true than chaff thrown into the air by paid spokespeople. Look, listen, pay attention, like a medical doctor, not like a spin doctor. Apply Occam’s razor: the simplest hypothesis is most likely correct. Obama is probably not a sleeper agent from the Muslim Brotherhood, Clinton probably doesn’t sell children out of the back of a pizza place, the “Golden Showers” tape probably doesn’t exist and Trump probably does not have a secret plan to save healthcare and wipe out Isis. He doesn’t even know how hair works.

Taking “consider the source” a step further, what does a speaker stand to gain from your capitulation with their argument? A child can understand this. Is that boy in overalls asking your to paint the fence because he wants you to have a good time, or because he doesn’t want to paint the fence? Is the scary orange from the Oval telling you he’s always loved the CIA (despite tweets calling them Nazis) because it’s true, or because he doesn’t want his motorcade to run into any unexpected trouble near a book depository? (Apply Occam’s razor to the last part of that sentence, too.)

Watch for the “pivot”

Whether you’re watching “Meet the Press” or moving a couch up the steps with Chandler, pay attention to the pivot. A child can understand this. If you ask someone a question and they change the subject, ask the question again. And again. And again. Whether the question is what happened to kitty when she died or what those funny sounds were coming from Mommy and Daddy’s room last night–if you ask a question and the answer is avoided–something’s up!

America is awesome. I consider myself extremely fortunate to live here and I know a lot of people worked and wrote and marched and fought and died at home and overseas to keep it safe, awesome, free and always trending towards fair. But it is a work in progress; it ALWAYS has been, and it always will be. A child can understand this. Looking for ways to improve life for all our citizens and ways to keep our armed forces out of harm’s way isn’t unpatriotic, it is our patriotic duty to the American experiment. It is our duty to everyone who came before us to keep fine tuning our way of life. But retroactively creating a “National Day of Patriotic Devotion” on inauguration day? Demanding “total allegiance to the United States of America”??? I pledge allegiance to America because it doesn’t demand that I do, rather, it inspires me to do so. Forget the tribalism that comes with political parties. It’s real life, not baseball. Parties change. Parties don’t care about you. Tell your child that if someone demands your allegiance to ANYTHING, do not trust that man, because, to paraphrase Sky Masterson, as sure as you stand there, you’ll end up with an ear full of cider … or a totalitarian regime.

Those are five simple, but not easy, ways to parse the information flying at us all the time. Critical thinking is an acquired skill, and one that requires practice, vigilance and a LOT of talking to our kids. I’m not beyond being buffaloed. I’ve been fooled before, and I’ll be fooled again. (I’m not a Boomer, so I’ve never had The Who’s confidence in the matter.) I’m trying to get sharper, and more importantly, I’m trying to give Viva the sharpness she needs to survive in world where facts seem to have an “alternative” I don’t find acceptable.

Natalie Dal Pra -
Want to enjoy a mid-morning meal with the whole family at a fun spot in Chicago or the suburbs? Look at this list of places to try out.
Read more
Health

The Centers for Disease Control and Prevention has listed their 2022 vaccine guidelines.
Read more