7-year-old stands up for transgender rights

While all eyes were on Illinois Gov. J.B. Pritzker as he signed a long-anticipated executive order aimed at promoting LGBTQ students’ rights in schools, at his side was a beautiful little girl wearing a pink tutu and giant bow in her hair, whose shirt read “This is what trans looks like.”

While she is thriving, things haven’t always been easy.

When she was in kindergarten and other kids learned she had a penis, the teacher initially refused to read the children’s book I Am Jazz to help explain what it means to be transgender to Ella’s classmates. All the while, she was picked on, called names and left out of playdates, as many parents felt uncomfortable with their children befriending a transgender child. At the same time, school administration refused to change Ella’s name in their system, and when Ella’s birth name was called daily for lunch, she refused to eat, fearing her friends would connect her to her boy name.

“Until recently, the schools had a lack of regulations and standards on how to handle transgender situations,” says Ella’s parent, Dee McCord (who identifies as non-binary) who lives in Chicago’s West Town neighborhood. “The new bill is a huge step for protecting trans kids and making sure they have training and support in schools.”

Ironically, even before Ella’s existence, Dee worked as an independent child and family advocate, working with transitioning children to get them the right resources and attending school meetings to ensure their gender support plans are followed. While they believe the newly signed order is a “step in the right direction,” Dee says society still has a “way to go,” especially when it comes to individual trans rights.

“You never want your child to be in a position where they’ll face adversity or bullying,” Dee says. “Statistics speak for themselves on rates for trans individuals having depression, committing suicide and being the victims of hate crimes. While Ella lives in an affirming household and surrounds herself with those who accept her, knowing I have a child in that demographic will always frighten me.”

“I want people to see me as a smart and helpful girl. I want them to know that I like to have fun and be like all kids. I am proud of being transgender and being in a queer family.”

Ella had what Dee calls a “rough go” at life and has come out on the other side. As a toddler, when Noella first started to communicate, she would tell everyone she was a girl. When she watched TV shows, she always gravitated towards the female character. And when she was old enough to dress herself, her parent says she insisted on pink and purple dresses.

While Noella’s family was accepting of her non-binary gender, the outside world was not and Noella started to experience anxiety, depression and tantrums that lasted for hours at a time.

It wasn’t until she visited the Gender Development Clinic at Ann & Robert H. Lurie Children’s Hospital of Chicago that things began to change. A psychologist asked if Noella is a girl, and she said yes without any hesitation. From that day forward, the pronouns became she and her, and the family never looked back.

“It was like someone flipped a switch,” says Dee, who calls Ella “the most self-assured person on the planet. Finally, my child could live their true identity.”

When frequently asked about why they let Ella transition at such a young age, Dee points out that the decision had nothing to do with gender roles — it was about letting Ella live a happy life.

“As parents, it is our job to foster who our kids are, and make sure they are taken care of. The best thing we can do is affirm our children so they end up happy with who they are,” Dee says. 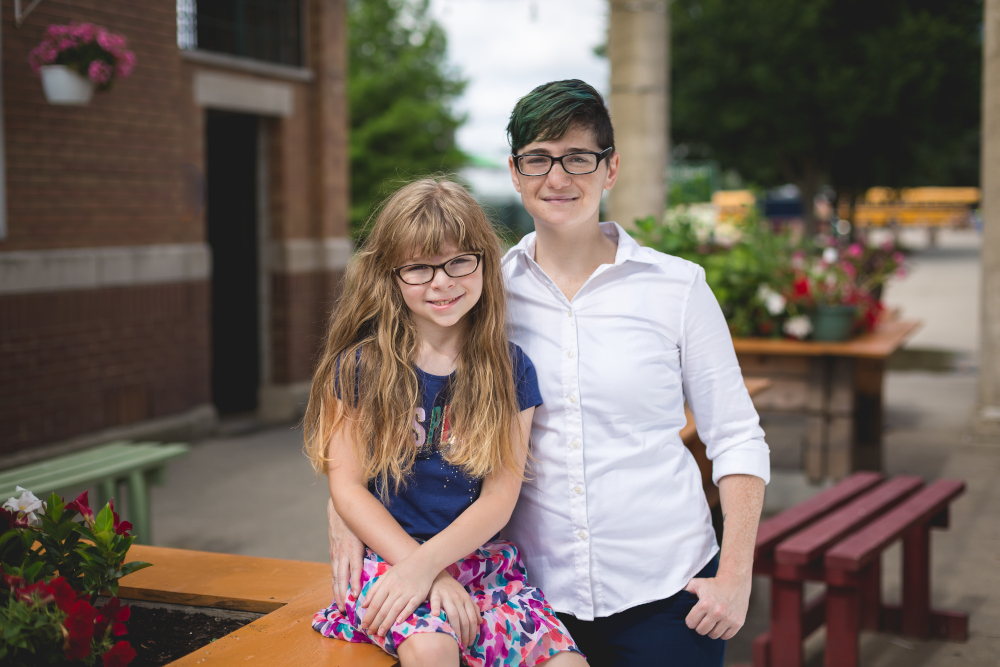 There’s no doubt that Ella knows who she is — a typical second-grader who tattles on her younger brother, Levi, and goes crazy for glitter, unicorns, nail polish and makeup. Dee calls her “the most feminine girly human that could possibly ever live.”

Ella likes to have friends over, play outside, use electronics and compete in ballroom dancing. Her favorite school subjects are math and science.

“I want people to see me as a smart and helpful girl,” Ella says. “I want them to know that I like to have fun and be like all kids. I am proud of being transgender and being in a queer family.”

Ella says she also likes helping other kids and wants any child — trans or not — to know they can always be her friend.

“All kids should feel happy and safe to be exactly who they are,” Ella says.

Dee is looking forward to watching Ella continue to grow and turn into the person she is and was meant to be.

“She so brave and fierce — a true force to be reckoned with,” Dee says. “I’m so thankful that I ended up with her as mine.”