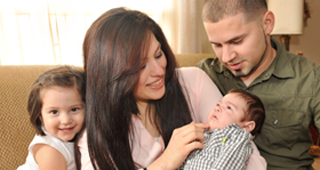 Espinoza, an Addison mom of two, had dramatically different pregnancies. Her first with her daughter Emily was a “walk in the park,” she says. Her second was a struggle.

“My pregnancy with my son totally caught me off guard,” she says. “He made me vomit all the time and I didn’t want to wake up or eat. … From the get-go, we knew he was a special baby.”

Yet all seemed fine until she visited her obstetrician for a routine 24-week ultrasound. That’s when the doctor spotted an abnormal growth on the baby’s neck.

A more detailed ultrasound confirmed the growth was cervical teratoma, or a rare benign tumor. What made Espinoza’s situation dangerous was the tumor’s location.

“When the doctor told me, I was in total shock. I didn’t know what to say, I think I even forgot how to breathe at that moment,” she says. “They suggested I go see a maternal fetal medicine doctor who could see more in depth and figure out what was going on. When I asked questions, my obstetrician would just say ‘I don’t know.’ Imagine going to a doctor and they don’t know what is going on with you or your baby.”

The specialists sent Espinoza home to research the tumor on the Internet. She discovered stories of successful and unsuccessful births, but very little information. It left her feeling stressed and “hollow,” she says.

As the pregnancy continued, the tumor grew. At 28 weeks, it measured 11 centimeters in diameter, nearly as large as the baby’s head. Doctors told her the baby’s best chance for survival would be a specialized cesarean section delivery called an EXIT procedure, short for Ex-Utero Intrapartum Treatment. During the procedure, a baby is partially delivered while continuing to receive oxygen from the mother via the placenta.

Doctors originally advised Espinoza that she would have to travel to a hospital to either Houston or Cincinnati for the complex procedure, a scenario she says added a new level of anxiety to an already stressful situation. After talking with more doctors, she learned she could have the EXIT procedure done at University of Chicago Medicine.

Dr. Laura DiGiovanni, director of the fetal center at the University of Chicago Medicine, has performed multiple EXIT procedure operations, including Espinoza’s. She says this “fetal anomaly is rare and complicated” and that babies have a 1 in 20,000 to 1 in 40,000 odds of developing it.

“We have probably the most extensive experience of this procedure in Chicago and the state of Illinois,” she says. “Each one of these tumors is unique and different, and we never know what we are going to face when we get into the operating room. There is always a chance of something going wrong but in our experience, we have been 100 percent successful in all our cases.”

On Valentine’s Day, Espinoza gave birth to her son John Carlos, two weeks earlier than expected. More than 30 physicians and staff members were involved in the high-risk birth.

Dr. Deborah Loeff, one of the top pediatric surgeons at University of Chicago Medicine, says so many people were needed in the operation to make sure both mother and baby were well looked after.

“The whole point of this operation is to maintain the baby on a sort of maternal life support,” she says.

Shortly after arriving into the world, baby John Carlos went through another operation where Loeff and her team removed the tumor. The operation to remove the then-12 centimeter tumor lasted about five hours. Aside from a scar on his neck and the extra skin the tumor once filled, doctors say he’s expected to live a normal, healthy life.

The baby is now two months old and is just a happy baby. Espinoza says that if you look at him, you would never imagine he went through all of this.

“As soon as he was born, everything went great. It still is,” Espinoza says. “He’s that type of baby that when you look at him, it makes the best of your day. He put me through this crazy pregnancy but everyday that I’ve had him home with me has been the best day of my life.”