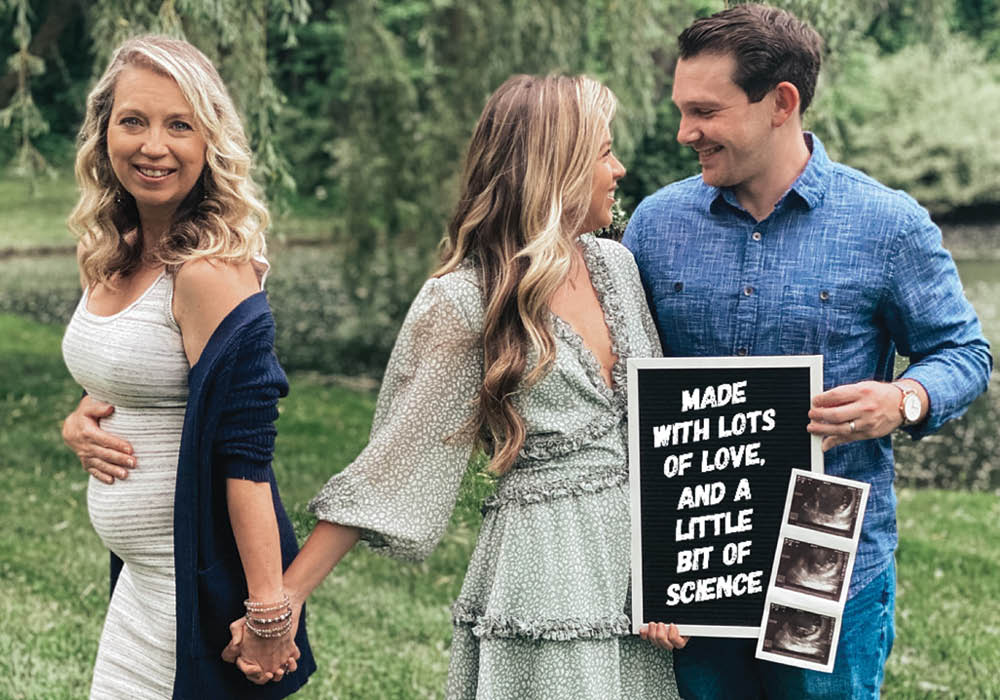 But the real story behind her birth is an incredible one.

Earlier this year, her 51-year-old grandmother, Julie Loving, became the gestational carrier for her 29-year-old daughter, Breanna Lockwood. On Feb. 25, an embryo from one of Lockwood’s eggs and her husband’s sperm was implanted into Loving’s uterus.

“And then the world shut down,” Lockwood recalls, referring to the COVID-19 pandemic.

Two years ago, after Lockwood’s miscarriage of twins, her mother brought up the idea of carrying a baby for her.

“I’ll happily do it,” Loving told her daughter.

Lockwood and her husband, Aaron, are high school sweethearts who married in 2016. Aaron was initially leery about the idea, concerned for the health of his mother-in-law and the future of his first child. His hesitation eventually gave way to hope.

“I think this is going to work,” he told his wife.

“I think so too,” she replied.

“It’s a very, very uncommon situation,” he says. “And it shouldn’t be common.”

Most surrogate women are under age 40, not over 50 with two adult children.

“But this is a reflection of Julie’s remarkable health,” Kaplan says.

Loving has run nine marathons, including the Boston Marathon twice, in addition to many years of bicycling, swimming and triathlon competitions. Before the implant procedure in February, she was running up to 50 miles a week.

Kaplan resisted when she first introduced the idea. He then had her checked out by a handful of medical specialists, including a high-risk obstetrician and psychologist, before proceeding with the implant procedure.

“This is an exceptional case, without a doubt. However, all the checks and balances were done carefully,” Kaplan says. “I wanted to make sure we lowered the risks as much as possible.”

A journey to motherhood

Loving’s pregnancy has since been described as “textbook,” unlike her daughter’s multiple attempts at pregnancy, which were anything but storybook.

“What Breanna went through to even get to this point is remarkable,” Kaplan says.

“And countless tears,” she says.

The implant procedure with her mother was deemed a success story, though with understandable cautiousness. The Lockwoods held their breath and counted their blessings as Loving carried their unborn baby girl through the first trimester, then the second. On June 5, Lockwood posted photos of her mother with a baby bump belly.

“Baby Lockwood will be brought into this world via gestational carrier, and this little miracle’s carrier is quite a special one. MY MOM,” Lockwood wrote. “Made with a lot of love and a little bit of science. They say, ‘It takes a village to raise a child,’ but for some it can take a village to HAVE a child.”

“The biggest supporter in my life is giving us our biggest blessing,” she wrote. “Defying the odds at 51 years old, she’s pushing reproductive medicine out of the box as one of only a handful of surrogates nationwide to deliver their grandchild via gestational surrogacy! She is the pure example of ‘you would do anything for your kids,’ and if I can even be half of the mother she is, I know I’m doing something right.”

Lockwood soon heard from thousands of well-wishers from around the world.

“Never in a million years did I expect to receive so many touching messages of women struggling with infertility and loss,” she posted two days later. “Don’t be ashamed of your story, it will inspire others.”

Her story immediately inspired other couples struggling with IVF challenges, who asked Lockwood, “Why didn’t I ever think of that?” She replied rhetorically, “What’s the difference between having a sister carry your baby or your mom carry your baby?”

Loving and her daughter became media darlings with an appearance on “Good Morning America” and stories in multiple publications including The Washington Post.

“We didn’t expect any of this media attention,” Lockwood says.

She began receiving baby shower gifts from strangers, selected from her online registry and delivered to her front porch. “It’s been overwhelming,” she says.

Lockwood’s Instagram page, created to share the details of the pregnancy with more than 125,000 followers at instagram.com/ivf.surrogacy.diary, shared the birth of Briar Juliette. Briar arrived earlier than her predicted Nov. 12 due date.

She’s been discreetly asked, “Are you going to someday have more children?” It’s a possibility. The couple has eight more frozen embryos available. Would Loving carry a second baby? “Let’s first see how this one goes,” she tells her daughter with a laugh.

“It’s getting a little uncomfortable,” she says. “I don’t remember being so uncomfortable when I was pregnant with Breanna and her brother. This is a completely different experience. A lot more stress. And a pandemic. It’s been a scary journey.”

Loving’s husband has done all the shopping and public interactions throughout her pregnancy. “He’s been so supportive of everything,” she says.

During the early stage of the pregnancy, Lockwood and her husband lived with her mother and father. They now live 15 minutes away from each other. The baby girl will be the first grandchild for both sides of the family.

“She will be spoiled,” Lockwood says.

On nice days, throughout the pregnancy, Loving had been taking long daily strolls with her future granddaughter safely cradled inside her womb. Someday soon, they will do it again hand-in-hand. “We’ll have a lot to talk about,” Loving says.

Lockwood looks forward to joining her mother and her daughter for their neighborhood strolls together. Loving already has a jogging stroller ready to go.

“We’re going to tell her about all this pregnancy at a young age,” Loving says.

“It won’t be a major sit-down moment,” Lockwood adds. “We’ll answer her questions as nonchalantly as possible.

“Someday, when she’s in school and asked to share a fun fact about herself, she will tell the other students how she came to be. It will be a mic-drop moment.”

This article also appeared in Chicago Parent’s holiday 2020 magazine and has been updated to announce the birth.

Here are tips from the nation’s leading scholars on race, democracy and inequality.
Read more
Outdoors