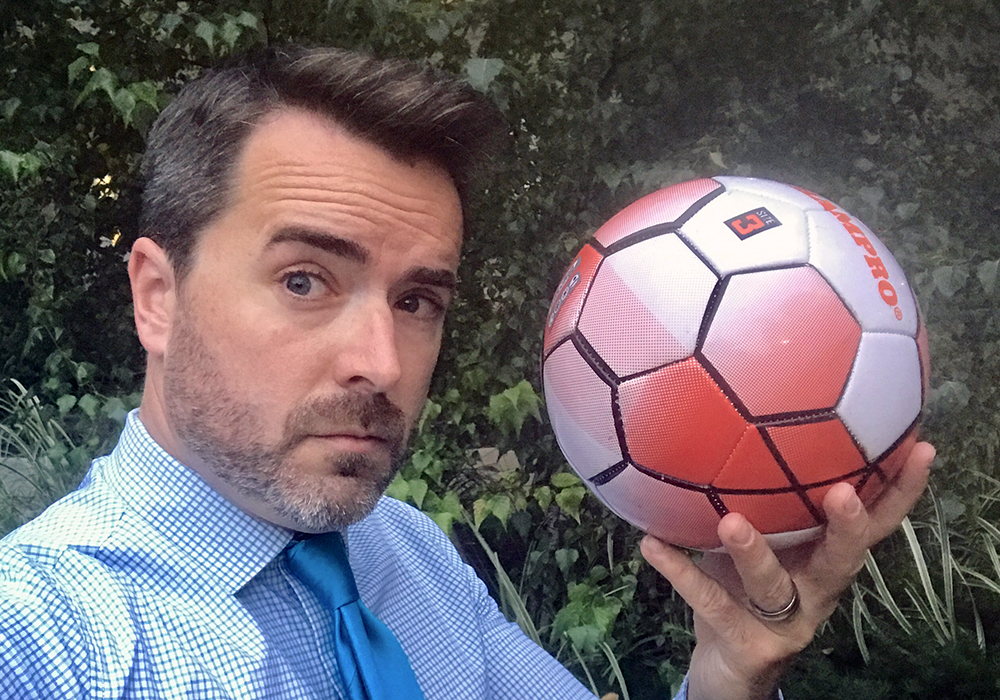 This week’s blog post is by The Paternity Test co-host Matt Boresi, who lives in the Edgewater Glen neighborhood of Chicago with his wife (“Professor Foster”) and their 6-year-old daughter Viva, who is so small those giant socks go up to her chin.

Despite the fact that my last name ends in a vowel, I can’t seem to get on board with soccer (or European football, or “basketball but with kicking” or whatever you want to call it). I grew up in the ‘80s in a heartland-y, God-fearing, Chevy-truckish, ‘Murican community, where any sport that could be played while wearing a ponytail wasn’t much of a sport at all. As I grew older and hipper, soccer became emblematic no longer of cosmopolitanism, but rather of suburban living and spiritual surrender. I swore to myself that I would live passionately and deliberately and avoid the tragic trappings of parenting. I would never buy a van, nor purchase soccer equipment, nor sit on the sidelines with other middle-aged boosters clapping my hands like a cymbal-playing chimp and shouting out children’s names encouragingly.

I never bought the van.

Here I am, standing on the sidelines of a park district soccer field, dictating this mini-essay into the notes on my phone and occasionally messing up Siri by shouting, “Go, Viva!” to my daughter. (Which, I just realized, is an extremely soccer-friendly moniker.) I still do not like soccer.

It isn’t soccer’s fault. It’s a fine sport if you’re a fan of hayfever and never scoring ever. Viva is in a perfectly adorable league with good parent coaches and nice kids on the field. It’s my own hang-up and I know it. My kid looks so cute in her oversized uniform and neon cleats I could eat her up, but I am still seething with resentment and self-loathing that I am on a soccer field. And, to be honest, she’s only interested in about one ten minute quarter per game, tops. The rest of the time is spent pulling out grass, complaining that the shin-guards are itchy, or asking alternately whether or not she’s winning and when it’s going to be time for dessert.

I can’t imagine she’ll be in soccer for long, but then again I couldn’t imagine that I’d sign up for soccer — or that I would hit reply-all on an e-mail about a dinner event and tell everyone at an organization that I was choosing steak as my entrée. Time changes everything and this week I did both of those things. So, who knows? Viva might end up the next Pelé or Mia Hamm … and with that I have exhausted my entire database of names of people I’ve heard of who played soccer.

So, since soccer is about goooaaaaals (even though they never seem to be scored), let’s focus on goals for the new soccer parent:

Be where you are and all that. This means (gasp) no phone or tablet during the game, and facing the field, clapping and whooping intermittently even when speaking to other parents.

No snide comments when packing the car, like, “Do you have your commie ball or is it still in the closet next to a bat and glove you could use for a real sport?”

Bury your horror at having conformed

When approaching the field, do not greet the other parents with, “Well, aren’t we a bunch of give-ups?”

“How long till your kid switches over to an activity that isn’t the worst?” is not a question you should use to strike up conversation on the sidelines.

Keep your eye on the prize

There’s ice cream after the game. (Or match, or meet or whatever it is.)

I’m assuming I can look supportive for sixteen games or whatever it’s going to be, and if I were a betting man, I’d guess “the beautiful game” is never going to be central to my child’s interests. Soon it will be done and I can again dedicate my time to more worthwhile endeavors, like making sure my daughter doesn’t go into the arts.

Childhood depression does occur. When parents and children are supported with relationship-based therapy, everyone benefits. Learn more.
Read more
Indoors