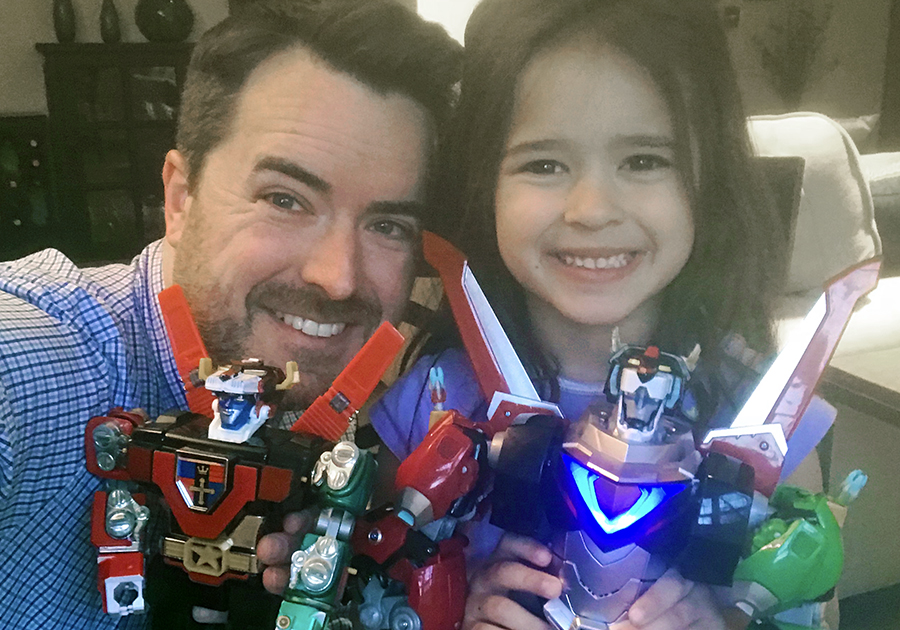 This week’s blog post is by The Paternity Test co-host Matt Boresi, who lives in the Edgewater Glen neighborhood of Chicago with his wife (“Professor Foster”) and their 6-year-old daughter Viva, who is ready to take on the Galra Empire, the regular Empire and Gargamel all at once.

In the 1970’s Peter Allen sang that, “Everything Old Is New Again.” This was sung again by Hugh Jackman playing Peter Allen in the 2000’s while at the same time Jackman was playing Wolverine, a mutant character born in the 1800’s and created in the ‘60s who travels in time to save the ‘70s from the 2000’s. Everything old is indeed new again, or perhaps “there is nothing new under the sun,” depending on whether you’re a glass half full or glass half empty kind of singing mutant. Regardless, many entertainment properties from our own childhoods (nearly everything from our own childhoods) have been reborn to be sold to our children. From Transformers to The Magic School Bus, everything old is new again. So, which of these resurrected Saturday morning spectacles are best? There are several reborn ‘80s shows that I love to watch with Viva, and which are largely better (or at least better for contemporary standards) than their Reagan-era versions.

I’ll save the best for first. When Voltron was dubbed from Japanese and brought to the states in the early ‘80s it was a game-changing cultural moment for many American boys. Robot lions which could combine into a giant robot dude to fight space monster-robots in a galaxy run by an evil empire of purple guys. It was grim and gritty for a kids’ property, and toyetic in just the way we loved. My die-cast metal Voltron (pictured above) cost my folks $75 (which in the ‘80s was a huge chunk of change) and was nearly impossible to find. (We rushed to a Toys”R”Us when it came in on a truck — one of my most joyful memories — and now Toys”R”Us is almost gone forever. RIP.)

The new Netflix version is WAYYYY better, and the new toy is amazing (in Viva’s hands, above). This show is probably too violent for her, so my wife isn’t going to be happy with this paragraph, but the show is funny, exciting and has a butt-kicking princess, a bi-racial (bi-species) hero struggling with his identity, and sort of trans boy hero to keep the conversation interesting. We can’t wait for Season 5.

Ah, the Smurfs. Belgian figurines turned ‘80s phenomenon. They’re back in a series of CG animated feature films, and the latest one is pretty darn funny. Viva likes them, and I spotted “Glider Smurf,” a figure I had as a kid, in the opening scene. We sing the song, we relish as Brainy is thrown into the woods for his pedantic rants, and we hope Azrael never eats anybody. This movie is MUCH better than “Smurfs and the Magic Flute,” the ‘80s Smurfs movie that for some reason featured no Mozart music and focused on two dudes named “Johann and Pee-Wee” instead of the magic blue elves we loved.

Woo-ooh! One of the best cartoons ever is back with Doctor Who as Scrooge McDuck and Lin Manuel Miranda as Gyro Gearloose. I’m having trouble with the square heads on the kids, and Launchpad’s voice isn’t nearly what is used to be, but Webigail is much more fleshed out than in the ‘80s and Huey, Dewey and Louie are distinguishable from one another.

Okay, this one isn’t coming until sometime this year, but it’s created by the folks behind “Voltron: Legendary Defender” with the edition of Noelle Stevenson (from the excellent comic “Lumberjanes”). My daughter already loves the “Princess of Power” from the old Filmation cartoons on Netflix. Frankly, if you can love the Filmation versions, with their constantly repeated animation cells and awful voices done by about three people (including cut-rate animation legend Lou Scheimer himself), you can love anything. Again, it’s girl power by way of punching and toys, but it’s going to be great, and Viva’s already got “She-Ra costume” at the top of her birthday gift list.    Everything ‘80s is new again (even Russian spies!), so grab some Magic Middles and an Ecto-Cooler and plop your kid down in front of the TV for some ‘80s reboots. The cartoons you love are worse than you remember, but their new versions are better than you’d guess.

When your child loses their first tooth, here's how to make the experience a special memory for them.
Read more
Travel

The Hyde Park nonprofit is inviting children of all colors and backgrounds to play, learn and grow together.
Read more
At Home

These snacks will put the "super" in your Super Bowl watch.
Read more