A PLACE TO BE TRULY

SOCIAL MEDIA MAY WORK MAGIC FOR KIDS WITH SPECIAL NEEDS

FIRST PRINTED IN THE MARCH/APRIL 2022 ISSUE

Social media often gets a bad rap. Blamed for everything from problematic digital behaviors to tics and stress disorders, parents have long struggled with allowing their children to live their lives on TikTok, SnapChat, YouTube and on every other online site.

But it’s not all bad news.

In fact, parents of kids and young adults with special needs are reporting that this has finally given their children an outlet to express themselves in a world that previously excluded them.

Could social media be the tool linking children with special needs with their peers?

Some local moms seem to think so.

Gabi Bagdade, 13, begged their parents for TikTok since they were 10.

“If you were to run the world, what would you do?” -Holly Simon, Nates mom 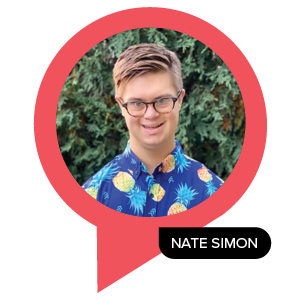 “They sometimes feel like the kids they’re exposed to don’t have the same interests,” Bagdade says of Gabi.

So Gabi created an anime TikTok account — and finally found their group of friends.

Nate Simon, 19, who has Down syndrome, also has found the upside of social media. He started using TikTok at the start of the pandemic.

His mom, Holly, started by posting a video asking Nate, “If you were to run the world, what would you do?”

That was all it took for Nate to go viral. Today, he has about 60,000 followers, mainly cheering him on for his “peculiar dance moves,” as his mother lovingly describes them. Nate met online and in-person friends from all over the country, and he even started his own Hawaiian shirt company, 21 Pineapples, designed to spread love.

“Nate never had a ton of friends,” Simon says. “The phone never rang, and he was not invited to many birthday parties. Come TikTok, this kid has so much self-confidence, it oozes from every post.”

His communication skills doubled, and the teen with special needs has four of his own speaking engagements in the next month.

“It’s because people believe in him and in his greatness,” Simon says.

Communication via social media is key for children with special needs, as it can give them a voice that they may not have been able to access as well previously, says Sarah Keddy, the school assistive technologist for Seashell, a charity dedicated to finding a secure environment for children with complex needs.

For example, Keddy says, YouTube is a particularly good tool for non-verbal children because they can access it on their computers and the “suggested videos” feature means that they may be able to find videos they like without additional help

“SOME CHILDREN WITH SPECIAL NEEDS MAY PREFER INTERACTION WITH A COMPUTER INTERFACE BECAUSE THEY CAN ACTIVELY CONTROL IT, AND THEREFORE COMMUNICATION THROUGH THIS MEDIUM MAY BE LESS THREATENING THAN FACE-TO-FACE CONVERSATION,” KEDDY SAYS.

It’s helped Jaden Gryda, 18, who has Down syndrome and especially loves making videos for TikTok.

“She has a lot of confidence when she makes her TikToks,” says Jaden’s mother, Mollie Gryda. “She’s an amazing dancer, so she blows us away with some of her TikToks — and it’s a fun way for her to communicate with her friends at school.”

DO’S and DON’Ts of social media

DON’T give bullies a platform:

There are plenty of trolls online and they will attack your children. “Things can roll down a hill in a good or a bad way,” says Holly Simon, the mother of Nate, a child with Down syndrome. “Nate is smarter than he was a year ago, but he still gets harassed. It’s the nature of the beast.” Simon makes sure not to let any of the trolls take advantage of Nate by keeping a very close eye on who he interacts with.

DO talking about coping skills:

Your child will need coping skills to deal with disappointment, stress, bullying and disagreements online, says Melanie Sage, assistant professor of social work at the University of Buffalo, specializing in the use of social media by marginalized youth and those with disabilities. Talk to your children about what to do when someone is mean to them.

DO check their social media:

“We’ll periodically check in on her phone and check her social media,” says Mollie Gryda, the mother of 18-year-old Jaden Gryda, who has Down syndrome and started using Facebook, Instagram, Snapchat and TikTok a few years ago. Gryda also enlisted her daughter’s friends and school to notify her if they see anything inappropriate or odd that Jaden may be posting.

How to Go Birdwatching with Kids

Families who want to go birdwatching with kids, read on for tips for helping kids fall in love with Chicagoland's birds.
Read more

My Mantra: Nothing Worth Having Comes Easy

One Chicago mom shares how this parenting mantra gave her strength while battling years of infertility.
Read more

Egg Hunts for Families to Check Out in Chicagoland

Chicago Parent Staff -
Kids can get ready for some Easter fun at these local events.
Read more