This Is the Summer to Bid Farewell to the Training Wheels

Is your kid ready to take the next step? Help them find the road this summer with Pedalheads biking camp. 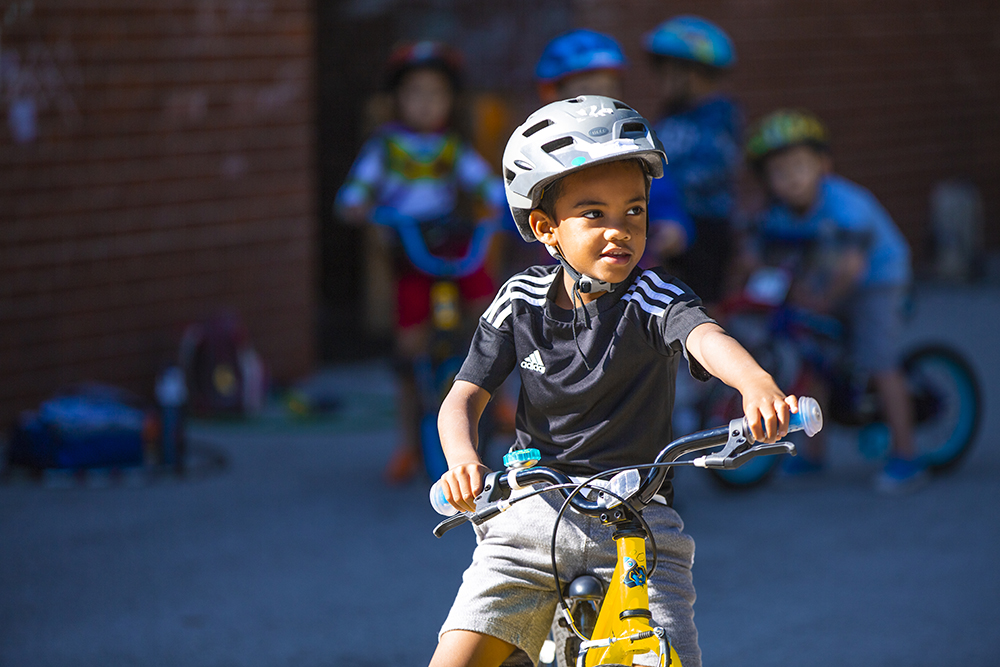 Riding a bike for the first time without training wheels is one of those life experiences we tend to always remember. But too often, the learning stops there and children are left on their own to figure out safety techniques, roadside etiquette and how to smoothy shift gears.

“Some parents take it for granted — OK, now you know how to ride,” says Danae Warmsby, Illinois and Washington, D.C. Regional Manager for Pedalheads, the children’s biking camp. “But the child might be struggling and thinking, ‘this looks so easy for everyone else. Why is it so much harder for me?’”

That doesn’t happen at Pedalheads, where children as young as 3 learn all there is to know about bicycling, from mounting to steering to braking to yes, shifting gears. As the camp enters its fifth year in the Chicago area, Warmsby gets a big kick out of seeing her former campers pedaling around town.

“I love to see kids biking and say, ‘Hey! You were a Pedalheads kid!’” she says with a laugh.

More than a half-million children have cycled through a Pedalheads Camp since it was first established in 1995. The camps have been in Illinois since 2016 with seven locations.

“We have been really blown away at the reception we’ve received from the Chicago community,” Warmsby says. “We are really big on being an addition to the community and immersing ourselves, including hiring local staff whenever we can.”

Pedalheads is available for kids ages 3 to 12, though the primary age is 4- to 8-year-olds. Six different levels are offered, from “Newbees” to “Treadheads,” so each child is placed with those who have similar skills.

While some children take to cycling like a fish to water, others are more fearful.

“We see kids who are scared at all levels,” says Warmsby. “We break everything down into nice, small steps so there is a lot of progression. There is positive peer pressure which leads kids to say, ‘OK, I can at least try this; it’s not as scary as I thought it would be.’ Everyone celebrates when they do something out of their safety zone. And the kids play a lot of games that they don’t even realize are actually strengthening their skills.”

The week-long summer camp offers programs that last a half day or full day, with before and aftercare available for working parents. The youngest tots are accommodated in a session that lasts an hour and a half.

Campers are placed with those their same age and skill level, and there are only four or five kids to each instructor, who is typically a local high school or college student who undergoes at least 10 hours of training and is first aid certified.

Campers learn how to ride in a group, safely navigate intersections, use hand signals and even how to perform basic bicycle maintenance. At the end of the week, those who are ready cycle on a nearby park trail and ride on residential streets that Warmsby promises are “calm and quiet.”

“We really help kids ride safely and independently on the road,” she says.

Warmsby says parents can view Pedalheads just as they would swim lessons or a sports camp. “We teach a life skill that parents don’t always have the time to teach, and we take stress out of the equation,” she says. “Many parents think of us as a driver’s ed course for biking.”